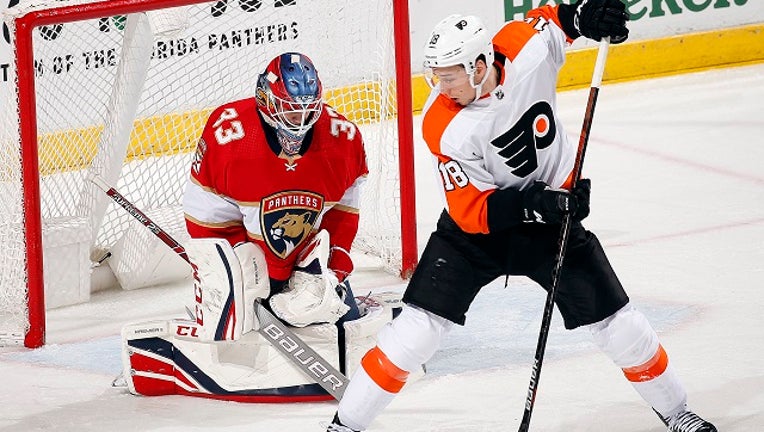 Robert Hagg, Sean Couturier, Scott Laughton, Nicolas Aube-Kubel and Tyler Pitlick scored for the Flyers. Carter Hart made 26 saves for his first road win in eight games. Hart had lost his last seven road starts, since a 3-2 shootout victory against the Boston Bruins on Nov. 10.

Justin Braun had three assists and Matt Niskanen had two as the Flyers improved to 9-3-1 in their past 12 games.

Aleksander Barkov and Jonathan Huberdeau scored for Florida. Sergei Bobrovsky allowed three goals on nine shots and was relieved by Sam Montembeault at the start of the second period. Montembeault made 16 saves. The Panthers dropped to 2-5-1 in their last eight games.

Trailing 4-0, Huberdeau’s shot from below the right circle got by Hart 33 seconds into the third to make the score 4-1.

Barkov’s wrist shot from the left circle found the net at 4:56 and closed the score to 4-2.

Couturier’s goal, a shot from the slot, beat Montembeault and made the score 5-2 with 5:08 left in the third. Hagg made the score 6-2 with 27 seconds left.

The Flyers took a 3-0 lead in the first.

Van Riemsdyk poked a rebound past Bobrovsky 4:24 in to make the score 1-0. Pitlick fired a shot from the right circle that went top shelf with 2:23 left in the first that made it 2-0. Aube-Kuble found a loose puck in front of the net after Florida’s MacKenzie Weegar misplayed the rebound and beat Bobrovsky with 1:28 left to stretch the lead to 3-0.

Laughton’s goal, a shot from close range after a feed from van Riemsdyk, built the lead to 4-0 with 1:02 left in the second.

NOTES: Flyers D Shayne Gostisbehere missed his fourth consecutive game with a knee injury. ... Barkov’s goal was his 152nd, tying him with Pavel Bure for third in franchise history. ... Panthers D Brian Boyle missed his fifth straight game with an upper-body injury. ... The Panthers are 0 for 11 on the power play in their Last four games.

Flyers: At the Tampa Bay Lightning on Saturday.