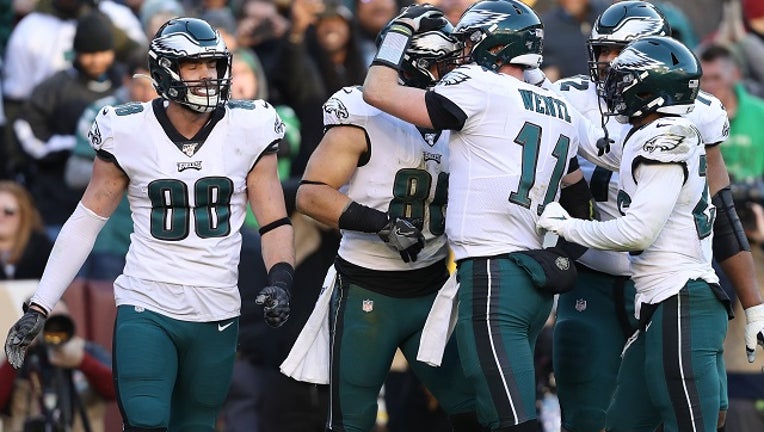 LANDOVER, Md. - Carson Wentz recovered from a disastrous fumble by leading a 75-yard, go-ahead scoring drive and throwing his third touchdown pass of the day to keep the Philadelphia Eagles' NFC East hopes on track with a 37-27 victory at the Washington Redskins on Sunday.

Wentz threw TD passes to running back Miles Sanders, tight end Zach Ertz and receiver Greg Ward and was 30 of 43 for 266 yards. The 4-yard pass from Wentz to Ward with 26 seconds left put Philadelphia up for good and electrified a stadium full of green-clad Eagles fans.

Wentz's ability to bounce back from some accuracy issues and a turnover means the Eagles (7-7) are still in the thick of the division race with a game against the division rival Dallas Cowboys coming next week.

Of course, Wentz didn't do it by himself. Sanders rushed for 122 yards and a touchdown and caught six passes for 50 yards. The Eagles' defense that struggled to stop Washington's Dwayne Haskins most of the afternoon got him to fumble for a touchdown by Nigel Bradham on the game's final play.

Coming off an overtime victory against Eli Manning and the New York Giants, a loss to Washington (3-11) could've had the Eagles facing elimination next week. Allowing an early 75-yard TD pass from Haskins to Terry McLaurin and falling behind 7-3, 14-10, 21-17 and 27-24 made that a distinct possibility.

Instead, Wentz was able to work some magic when it mattered most.

Adrian Peterson's 10-yard touchdown early in the fourth quarter gave him 110 for his career and tied him with Walter Payton for fourth on the all-time list. Peterson had 16 carries for 66 yards.

Free agent coach Urban Meyer took in the game from Redskins owner Dan Snyder's box and watched parts of it with a familiar face from his college past. Meyer at one point could be seen talking and laughing with injured Redskins quarterback Alex Smith, who he coached at Utah.

Meyer has connections to several Redskins players, including Florida products Jordan Reed and Jon Bostic and, of course, Haskins and McLaurin.

Eagles: host the Cowboys in what could be a crucial game to decide who wins the division.

Redskins: host the New York Giants in either another Eli Manning swan song game or a showdown between Haskins and Daniel Jones.