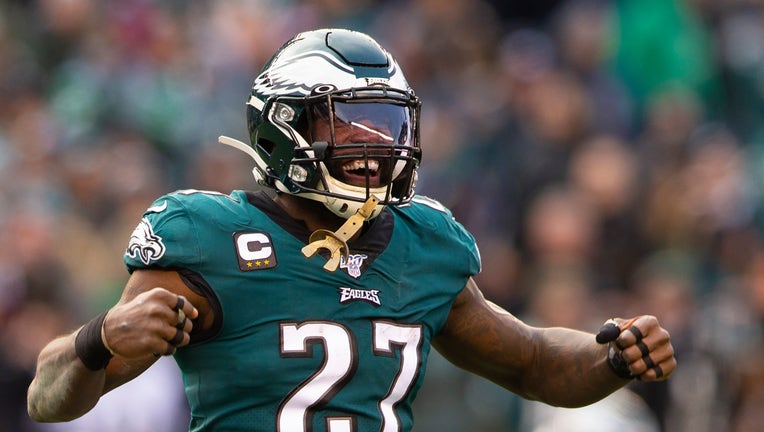 Malcolm Jenkins #27 of the Philadelphia Eagles reacts against the Seattle Seahawks at Lincoln Financial Field on November 24, 2019 in Philadelphia, Pennsylvania. (Photo by Mitchell Leff/Getty Images)

PHILADELPHIA - The Philadelphia Eagles have named veteran safety Malcolm Jenkins as the team’s recipient of the 2019 Walter Payton Man of The Year Award.

Jenkins was one of 32 team winners selected and nominated to receive the league’s Walter Payton Man of the Year Award, which will be award at the NFL Honors ceremony Feb. 1. Jenkins was previously named the team's nominee in 2017.

The award recognizes players for their excellence on and off the field, especially for their community service, and is considered the league’s most prestigious honor.

The Malcolm Jenkins Foundation has worked to establish programs that emphasize mentorship, character development, leadership, education, life skills, and health in New Orleans, where he started his career, since 2010.

Jenkins’ foundation has also organized annual events in Philadelphia, and Columbus, Ohio where he played for the Ohio State Buckeyes.

In recent years, Jenkins has taken a leading role in advocating for criminal justice reform with the help of a number of teammates and peers.

In 2017, Jenkins orchestrated two days of key meetings that focused on many of these issues that are prevalent in the state of Pennsylvania. Jenkins attended meetings with politicians and lawmakers at the State Capitol in Harrisburg, Pennsylvania, where he helped support bills related to criminal justice reform – namely, Clean Slate legislation.

In addition to his efforts to create systemic change and his foundation's work to create change for individuals, Jenkins helped co-found the Players Coalition.

For more on Jenkin’s work in the community, visit the Philadelphia Eagles’ website.