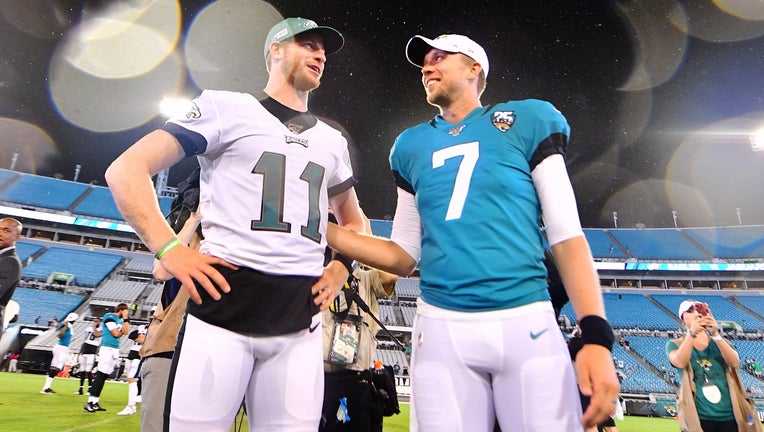 Carson Wentz #11 of the Philadelphia Eagles and Nick Foles #7 of the Jacksonville Jaguars visit with each other after a preseason football game at TIAA Bank Field on August 15, 2019 in Jacksonville, Florida. (Photo by Julio Aguilar/Getty Images)

PHILADELPHIA - Nick Foles' debut with the Jacksonville Jaguars lasted 10 plays and ended with the former Super Bowl MVP quarterback sitting on the bench with a somber look on his face and a black sling around his left arm and shoulder.

Foles broke his left clavicle in a 40-26 loss to Kansas City and will have surgery Monday. He's expected to be placed on injured reserve, meaning he will miss a significant chunk of the season. He would be eligible to play again in Week 11, specifically Nov. 17 at Indianapolis.

"It's not the way you want to start your time here," Foles said. "Sometimes things don't happen like we expect them to, but we just have to have faith that it's for a reason."

Meanwhile, Foles got some support from his former teammates in Philadelphia. Carson Wentz told reporters Wednesday that he has reached out to Foles in the wake of his injury.

“I did reach out to Nick, and you know I love Nick to death and the competitor that he is. It’s really a bummer and unfortunate, but that’s what we sign up for,” Wentz said.

Wentz also touched on the importance of faith in times of adversity.

“I know he believes that God’s using it for a reason, so to be able to just go through it from a faith-filled standpoint for him, I know it’s tough, but I know he’ll handle it well,” he added.

On the field, Foles has been replaced by rookie Gardner Minshew, who will get the start when the Jaguars take on the Houston Texans Sunday.

Wentz and the Eagles will head to Atlanta to take on the Falcons Sunday night.