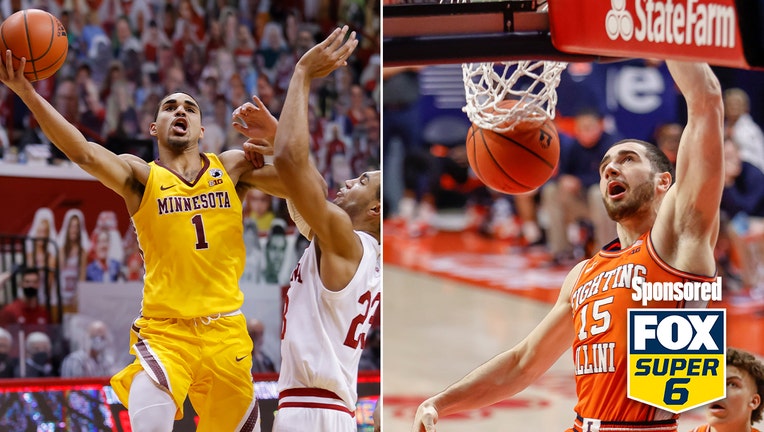 LEFT: Tre' Williams #1 of the Minnesota Golden Gophers shoots the ball against Trayce Jackson-Davis #23 of the Indiana Hoosiers. RIGHT: Giorgi Bezhanishvili #15 of the Illinois Fighting Illini scores during the first half against the Northwestern Wil

Even in this crazy pandemic season in college basketball, there is one thing that goes a long way towards making sure that a team will get a little madness in their lives in March – big resume wins.

Minnesota is one of those teams that has some big wins on the resume- Michigan, Iowa, Ohio State and Purdue are all Top 25 teams who have lost to the Golden Gophers this year. But a recent 2-5 stretch, an absence of road wins (0-8) and a tightening bubble all now have a greater sense of urgency on the Gophers to get another big name on their resume.

So that’s what makes Saturday’s home contest against No. 5 Illinois (2:30 ET, FOX) so critical for Minnesota’s NCAA chances. For the Illini, there is still a possible No. 1 seed and a Big Ten title in play for them as well.

You can win money on this Big Ten matchup by playing FOX Super 6. Just answer the following six questions correctly and you could take home $1,000. Best of all, it’s free to play- just download the FOX Super 6 app on your phone or tablet device.

Which team will have the most bench points in the first half?
Illinois or Minnesota
In the first game between the two teams back in Champaign on Dec. 15 – a 92-65 Illinois drubbing- Minnesota’s bench actually outscored the Illini by a 26-23 margin for the game. The Illini and Gophers tend to go deeper on their bench than most- nine players have played in 18 or more games.

What will Minnesota’s Field Goal percentage be for the game?
0-35, 36-40, 41-45, 46-50, 51-55 and 56%+
The Gophers shooting has gone colder from the field- they are a 40.3 percent shooting team overall and have dipped to 38.2 percent in conference play. Particularly worrysome for Richard Pitino should be their numbers from 3-point range- 29.1 percent overall and 28.3 percent in conference play.

Pick the team to win and by how many points
Illinois by 1-3, Illinois by 4-7, Illinois by 8+, Minnesota by 1-3, Minnesota by 4-7, Minnesota by 8+
The fact that Minnesota has been so good at home- 13-1 at Williams Arena this year- gives Minnesota a chance against the Illini. But the loss to Illinois back in December was so decisive and the fact that Illinois is one of the best teams in America on the road- 5-1 overall with only a slip-up at Rutgers on Dec. 20- that its tough to think that a slumping Gophers squad will be able to flip the switch for some home magic.