FOX 29's Sue Serio has a look at what impact a nor'easter will have on the area when it arrives Friday night and brings snow into Saturday. Some areas are facing the possibility of more than a foot of snow.

PHILADELPHIA - A powerful nor'easter is expected to impact the Delaware Valley Friday night and into Saturday morning and forecasters say it could mean parts of our area could see up to a foot or more of snow.

The weather advisories will go into effect at 7 p.m. Friday and will not expire until the snow subsides on Saturday night. Areas under the Blizzard Warning should brace for snowfall between 8 and 15 inches, and wind gusts up to 50 miles per hour, according to the National Weather Service.

A powerful nor'easter could bring upwards of a foot of snow to parts of the Delaware Valley Friday night and Saturday. Most of the area is expected to see several inches of snow as the storm moves up the coast.

The National Weather Service warns that travel in areas under the Blizzard Warning could be ‘very difficult to impossible’ as blowing snow could reduce visibility and gusty winds could bring down tree branches. Blizzard conditions are primarily expected at or withing a few miles from the coast.

You may see some snow and flurries Friday morning, before our main event Friday night. During the day Friday, forecasters expect temperatures to stay cold with daytime highs in the 30s. Those temps will drop into the 20s as the powerful storm spins up the coast on Friday night. 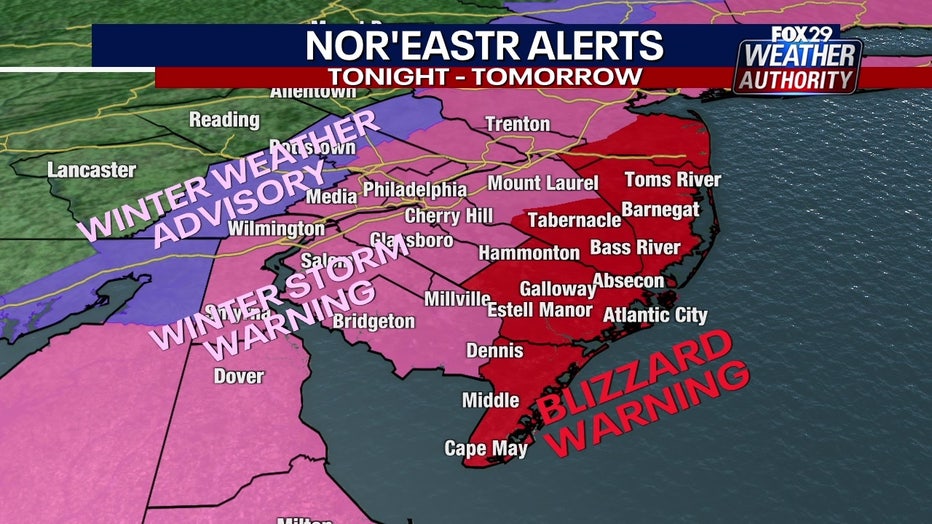 How much snow will we get?

Rivaling models have predicted two different stories about the track and severity of the nor'easter over the last few days. The European model has said the system will spin far enough off the coast to pummel the Delaware Valley with snow, while the GFS model has shown a wider variety of accumulations from the storm hugging tightly to the coast.

The FOX 29 Weather Authority predicts that coastal regions of New Jersey and southern Delaware will bear the brunt of the winter storm, with between 10 and 15 inches of snow piling up. 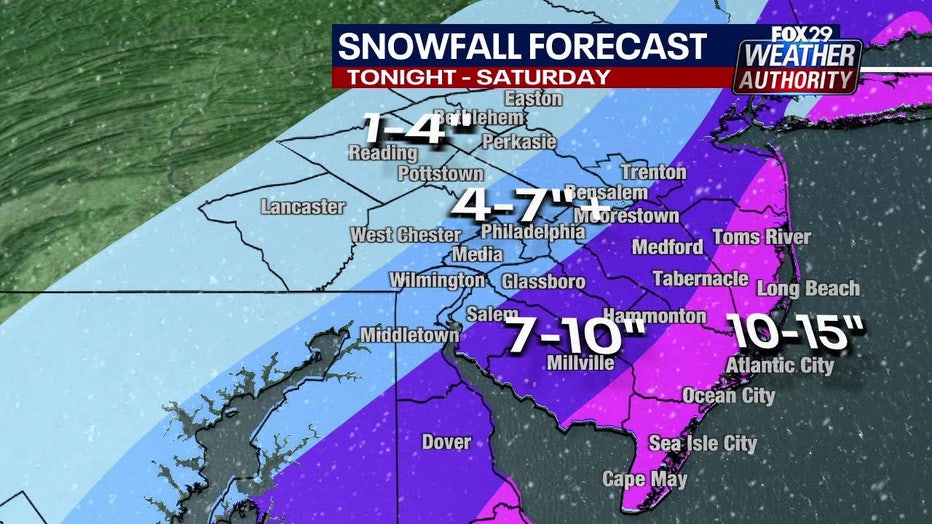 A large portion of interior New Jersey - including areas just south and east of the I-95 corridor and most of Delaware - should expect anywhere from 7-10  inches of snow.

The Philadelphia area and I-95 corridor carry the most uncertainty when it comes to forecasting snow totals. That area could be a key cutoff point, meaning potential for totals as little as 3 inches, or up to more than 7 inches.

Areas north and west of Philadelphia should see the lightest accumulations between 1 and 3 inches.

When will the snowstorm hit?

Forecasters believe the snow will start around dinnertime Friday night and last throughout Saturday. The winter storm watches and warnings issued by the National Weather Service cover the evening on Friday and they do not expire until 7 p.m. Saturday. 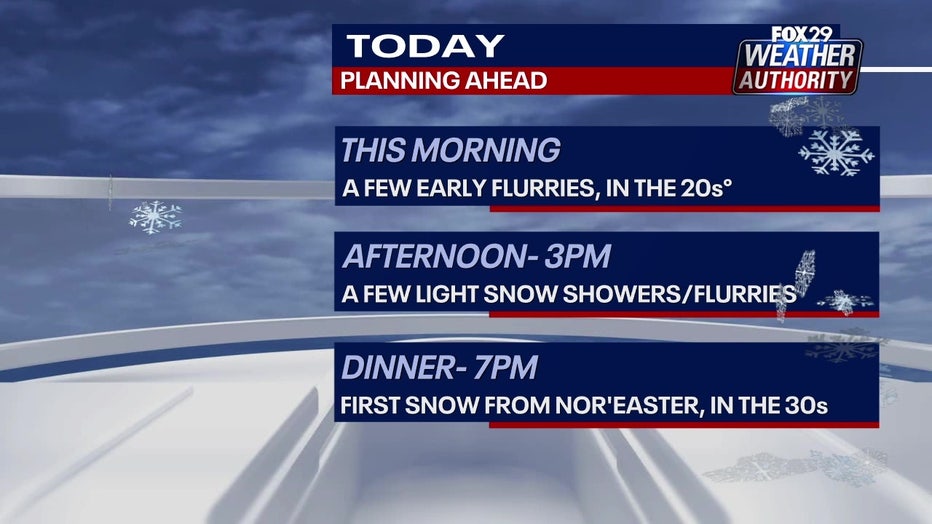 The snowstorm will continue to churn on Saturday morning with the heaviest snowfall continuing to batter the coastal areas of New Jersey and Delaware. Steady snow is expected to coat interior parts of New Jersey, Delaware, and a sliver of southeastern Pennsylvania overnight and throughout the morning.

FOX 29's Scott Williams expects the snow to taper off during the middle of the afternoon on Saturday, leaving just enough daylight to start digging out.

Strong winds will be possible from Friday night through Saturday, potentially causing blowing and drifting snow. Those conditions could create very low visibilities, especially along the Delaware and New Jersey Coasts.

Wind chills will also be frigid, with temperatures already forecasted to be in the 20s Saturday. Dangerous wind chills are expected Saturday night and into Sunday morning.

Minor coastal flooding is expected Saturday morning along portions of the New Jersey and Delaware coasts. The National Weather Service says the maximum storm surge is about 1.5 to 2 feet, and that any flooding should be minor thanks to fortunate timing.

Gale Warnings have also been issued in areas off the coast.

For the latest forecasts and conditions, download the FOX 29 Weather Authority app.

The National Weather Service has also issued Blizzard Warnings along the coasts of Maine, New Hampshire, Massachusetts, and the southern Delmarva Peninsula. This includes the cities of Boston; Portland, Maine; and Ocean City, Maryland.

Winter Storm Warnings are in effect for a larger area of the Northeast from Maine to North Carolina, including New York City and Norfolk, Virginia. Winter Weather Advisories extend farther south and westward into parts of the Southeast and Appalachians. 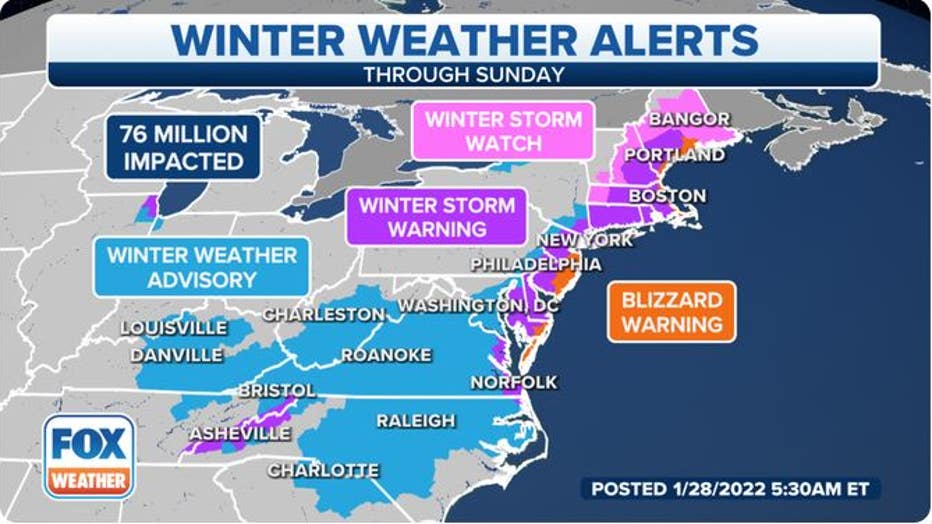 Before the storm's arrival, another blast of arctic air will surge into the Northeast on Friday in the wake of a cold front. An intensifying low-pressure system will then track near or off the East Coast late Friday through Saturday in response to an upper-level jet stream disturbance punching out of Canada and into the eastern half of the U.S.

The cold air will team up with that strengthening area of low pressure to fuel a potentially high-impact winter storm for parts of New England and the coastal mid-Atlantic.

This nor'easter is expected to intensify into a bomb cyclone, a term used to describe a low-pressure system that undergoes "bombogenesis" – defined as a rapid pressure drop of at least 24 millibars in 24 hours or less – indicative of a very intense storm.

FOX Weather: How the nor'easter will impact the rest of East Coast

FOX Weather's Steve Bender provides a larger look at how the nor'easter that will bring snow to the Delaware Valley Friday and Saturday will impact the rest of the coast.