Che-Che the dog, who lost family to COVID-19 gets walk of honor from shelter after finding forever home

Che-Che first made headlines when photographs circulated social media showing her being held by an MCSPCA worker in protective gear after she was left without a home when her two owners lost their battles with the novel coronavirus.

SYDNEY - A local government in Australia said it will review its "re-homing practices" after it decided to fatally shoot 15 rescue dogs, including several puppies, in an apparent effort to prevent out-of-town volunteers from spreading COVID-19 while traveling to pick up the animals.

The Bourke Shire Council, located in a small rural area of New South Wales, said in a statement that it could no longer care for all of the dogs at the Bourke Animal Shelter, which has five dog holding pens that were at capacity. It said out of the 15 dogs in its care, two of the dogs had become "very aggressive against each other," raising concerns by staff.

The council said it made contact on two occasions with the person who regularly helps to find new homes for the dogs, but the individual was unavailable. The statement added that the council had other "unsuccessful attempts at alternative action," and that the dogs had been in the pound "well in excess of the time required under the state’s Companion Animals Act."

"And coupled with Council seeking to stop people from other communities entering Bourke given the level of vulnerability in the community (with all regional NSW under stay-at-home orders at the time), the decision was made to euthanise the dogs," the statement reads.

It added: "The town is in a tenuous situation at the moment with COVID. Positive cases are on the increase. Council is being very careful with people entering Bourke. The majority of council staff have been stood down to avoid the virus spreading further in the community." 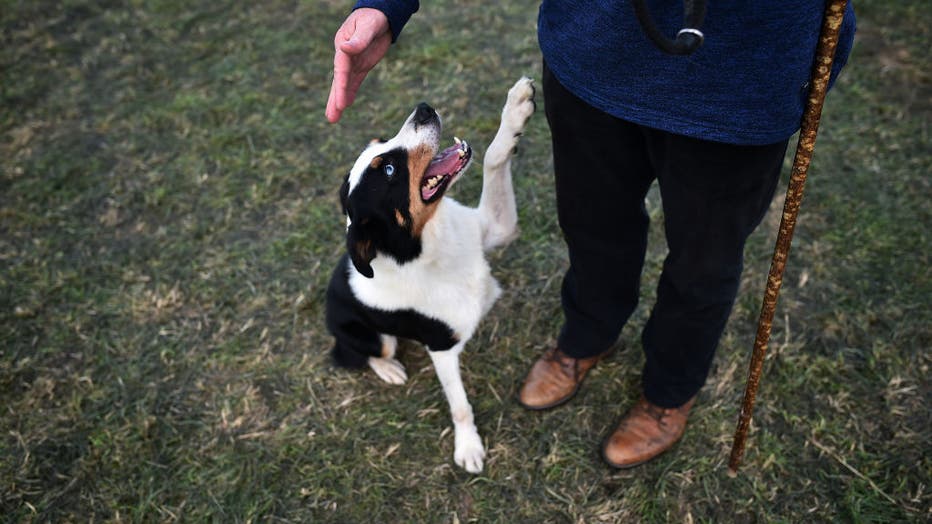 FILE - A file picture shows a dog reaching for its handler on Sept. 9, 2018, in Dromore, Northern Ireland. (Photo by Charles McQuillan/Getty Images)

Emma Hurst, a New South Wales lawmaker from the Animal Justice Party, told the New York Times that the council had killed the dogs, including a mother and her puppies, instead of allowing volunteers from an animal shelter in another town to come and pick them up.

Hurst added on Twitter that advocates had tried "desperately to stop Bourke Shire Council killing the homeless and lost dogs in their care, only to find out they had been killed already."

New South Wales is under a stay-at-home order amid the spread of the delta variant of the coronavirus, which reported more than 900 new COVID-19 cases on Tuesday — a new daily high. Residents are urged not to travel outside of their local area "if you can avoid it." Animal welfare, care and accommodation service workers are classified as "authorized workers," meaning they can travel outside of their local government areas if required for work.

The Office of Local Government, a government agency that oversees local councils in New South Wales, has encouraged councils to keep rehoming animals where health advice can be followed, according to the Sydney Morning Herald. It is looking into the incident to see whether the council’s actions complied with animal cruelty laws.

The Bourke Shire Council said in its statement that none of the dogs were registered or chipped. It initially had five dogs at the shelter in early August. One of the dogs had a litter of 14 puppies, four of which died. Two of the dogs had been surrendered to the council and shown aggression towards the shelter staff and three were picked up while roaming the streets.

The council statement said Bourke had supported re-homing animals in the past and would continue to do so, noting that its euthanizing rates had dropped from 95% in recent years to nearly zero thanks to the rehoming of dogs — "up until this required action."

"Council is reviewing its re-homing practices and will be reaching out to organisations who may be able to assist during these difficult times," it said.