21 Years ago, Bill Clinton became the second president to be impeached

On Dec. 19, 1998, after 14 hours of discussion, the House of Representatives voted to approve two articles of impeachment against Clinton.

On Dec. 19, 1998, after 14 hours of discussion, the House of Representatives voted to approve two articles of impeachment against Clinton, making him the second president in American history to be impeached.

Unlike Nixon before him, Clinton vowed to finish his term.

The Constitution states that “The President, Vice President and all Civil Officers of the United States, shall be removed from Office on Impeachment for, and Conviction of, Treason, Bribery, or other High Crimes and Misdemeanors.”

Clinton was charged with lying under oath to a federal grand jury and obstructing justice after it came to light that he had been having an affair with Monica Lewinsky, a 21-year-old unpaid intern — an affair which he originally denied.

The affair began in November 1995, and Clinton and Lewinsky had nearly a dozen sexual encounters at the White House over the course of a year and a half.

In 1997, after Lewinsky was transferred to the Pentagon, she began confiding in her coworker Linda Tripp about the affair. Tripp secretly recorded the conversations.

In December, Lewinsky was subpoenaed by the lawyers of Paula Jones, who was suing Clinton for sexual harassment. Though she originally denied the affair in an affidavit, FBI agents and U.S. attorneys eventually got her to cooperate with the prosecution.

The story broke in late January 1998, and Clinton infamously publicly denied the allegations by saying, “I did not have sexual relations with that woman, Ms. Lewinsky.”

When then-President Clinton testified in front of a grand jury on Aug. 17, he admitted to prosecutors from the office of independent counsel that he had, indeed, had an extramarital affair with Lewinsky.

During a closed-door testimony, Clinton became the first sitting president to ever testify before a grand jury in an investigation of his conduct.

Later that evening, he gave a four-minute televised address to the American public, acknowledging that he had engaged in an inappropriate relationship with Lewinsky.

"As you know, in a deposition in January I was asked questions about my relationship with Monica Lewinsky," he said. "While my answers were legally accurate, I did not volunteer information,” he said. “I know that my public comments and my silence about this matter gave a false impression. I misled people, including even my wife."

On Sept. 9, Independent Counsel Kenneth Starr submitted a report to the House of Representatives comprised of 18 boxes of supporting documents, known as the Starr Report. Two days later, it was released to the public. 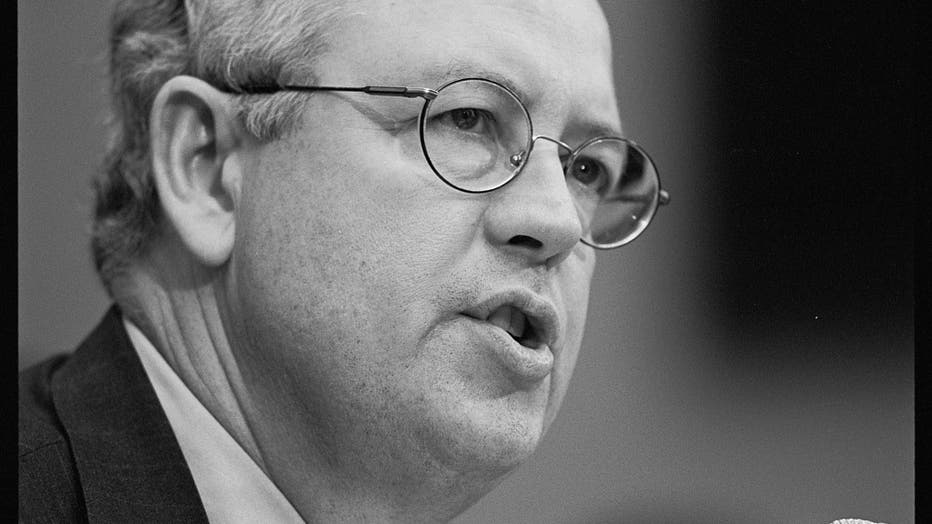 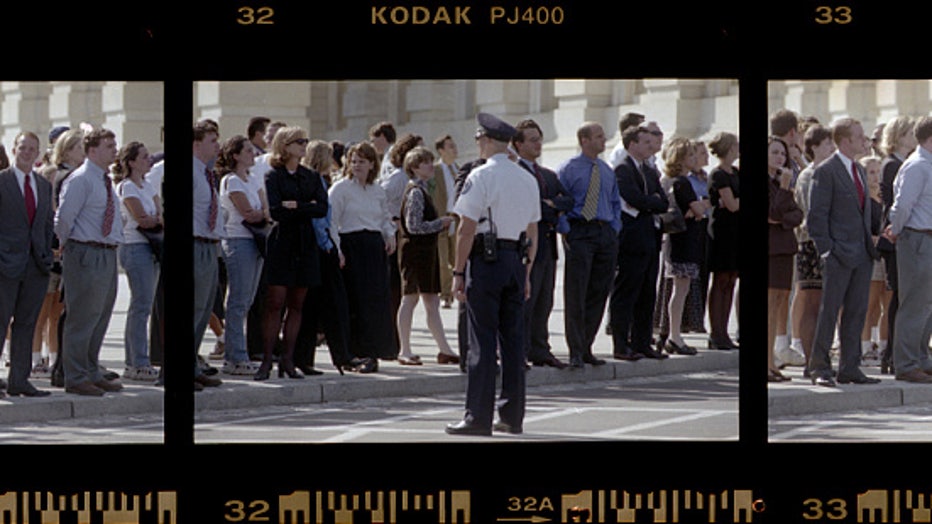 Film negatives from Clinton impeachment. Spectators watch the delivery of Independent Counsel Kenneth W. Starr's 445-page report to the House steps which describes "substantial and credible evidence" that "may" constitute grounds for impeachment of P (Scott J. Ferrell/Library of Congress)

The Starr Report presented a case for impeaching Clinton on 11 grounds, including perjury and witness-tampering. An impeachment inquiry was authorized by the House on Oct. 8. 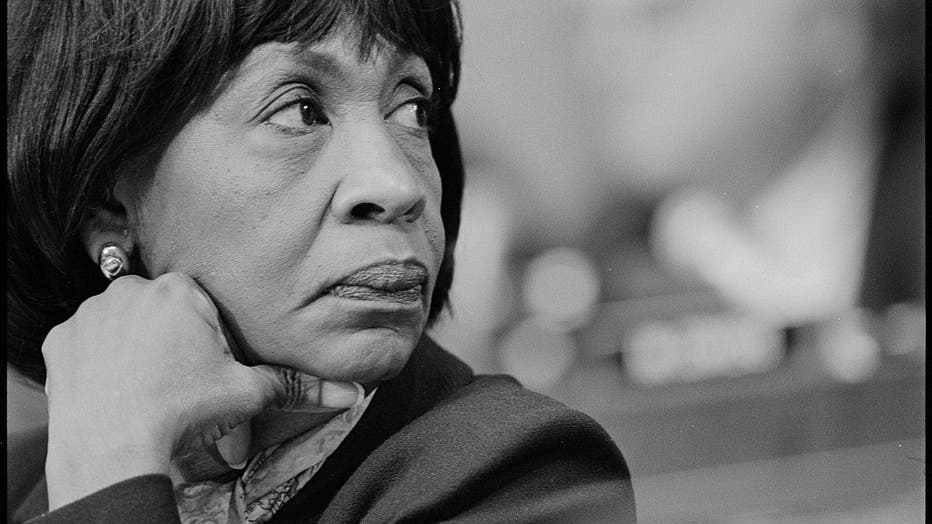 Representative Maxine Waters during a Judiciary Committee hearing related to the impeachment of President Bill Clinton. (Rebecca Roth/Library of Congress) 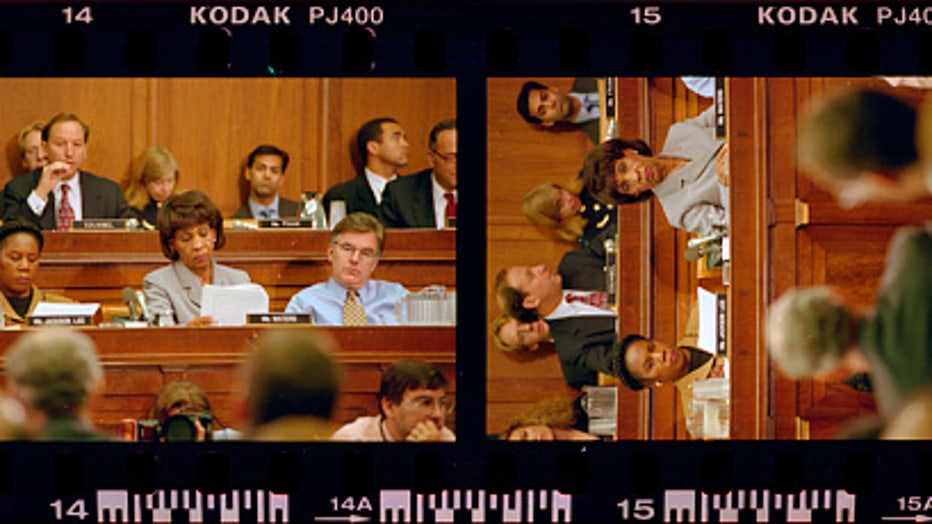 On Dec. 19, the House voted to impeach Clinton.

“I have accepted responsibility for what I did wrong in my personal life, and I have invited members of Congress to work with us to find a reasonable, bipartisan and proportionate response,” Clinton said in his remarks on the White House lawn immediately following the vote.

“That approach was rejected today by republicans in the House, but I hope it will be embraced in the Senate,” he continued. “I hope there will be a constitutional and fair means of resolving this matter in a prompt manner. Meanwhile, I will continue to do the work of the American people.”

The trial was then sent to the Senate on Jan. 7, 1999. Per the guidelines laid out by the U.S. Constitution, the chief justice of the U.S. Supreme Court — then William Rehnquist — was sworn in to preside as judge, and senators were sworn in as the jury.

On Feb. 12, the Senate held a vote to determine whether Clinton would be removed from office. The president was acquitted on both articles of impeachment after the prosecution failed to achieve the two-thirds majority necessary to convict.

Following the vote, Clinton then addressed the nation once more.

Now that the Senate has fulfilled its constitutional responsibility, bringing this process to a conclusion, I want to say, again, to the American people how profoundly sorry I am for what I said and did to trigger these events, and the great burden they have imposed on the Congress and on the American people.I also am humbled and very grateful for the support and the prayers I have receive from millions of Americans over this past year. Now, I ask all Americans — and I hope all Americans, here in Washington and throughout our land — will rededicate ourselves to the work of serving our nation and building our future together. This can be, and this must be, a tie of reconciliation and renewal for America.