The Ruby Roman strain was first introduced to the market 12 years ago after 14 years of cultivation by the Ishikawa Prefectural Government. They are known for being extraordinarily juicy and having low acidity and high sugar. Each grape must weigh a minimum of 20 grams.

KANZAWA, Japan - A bunch of 24 Ruby Roman grapes was sold Tuesday for 1.2 million yen — the equivalent of about $11,000 U.S. dollars, or $450 per grape — at the first auction of the season in the Ishikawa Prefecture, held in the Kanazawa City Central Wholesale Market.

A $450 price tag for a single grape might seem ludicrous to a Westerner, but in Japan, it’s a rather normal occurrence, harking back to centuries-old tradition.

Forty bunches of Ruby Roman grapes went up for auction on Tuesday, each of which had to meet very strict requirements for sugar content and size. 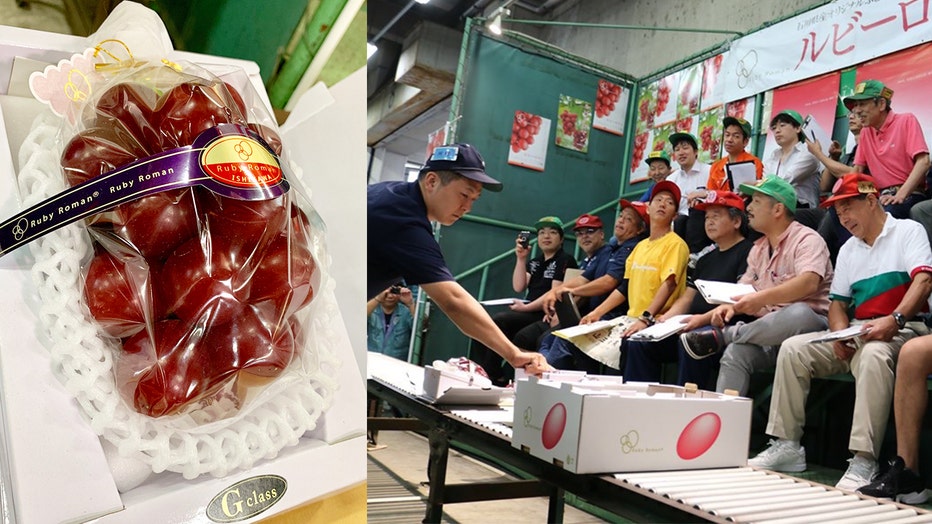 This bunch of 24 Ruby Roman grapes sold Tuesday for 1.2 million yen — the equivalent of about $11,000 U.S. dollars, or $450 per grape — at the first auction of the season in the Ishikawa Prefecture. (Photos courtesy of JA Ishikawa)

The Ruby Roman strain was first introduced to the market 12 years ago after 14 years of cultivation by the Ishikawa Prefectural Government. They are known for being extraordinarily juicy and having low acidity and high sugar. Each grape must weigh a minimum of 20 grams. The grapes you would see at your local American grocery store, by comparison, most likely weigh about 5 grams each, depending on the variety.

The bunch of grapes that sold for 1.2 million yen were considered “G class,” according to the farming co-op that produced the grapes, meaning that each grape actually weighed in at 30 grams or more.Japanese farming cooperative JA Whole Farm Ishikawa refers to Ruby Roman grapes as the “dream grape” because of their color, flavor and size, and it hopes to ship 26,000 bunches of them to market by the end of September. Production of luxury fruits like Ruby Roman grapes is intentionally limited to keep demand high.

According to Japan Times, Tuesday’s bid is the most expensive since Ruby Roman grapes first hit the market 12 years ago.

The bidder was an operator of Hyakurakuso hot springs inns, which are luxury ryokan inns, meaning they focus on presenting an experience of traditional Japanese lifestyle and hospitality. The grapes will be served to guests at Hyakurakuso.

Takashi Hosokawa, who manages one of the inns, explained that the bid amount was symbolic, "We offered 1.2 million yen to mark the 12 years (since the grape came on the market) and to celebrate Reiwa's first auction."

Paying exorbitant (by Western standards) prices for specialty fruits to be given as gifts is a long-standing tradition in Japan, and as long as there’s a market for luxury fruit, farmers will continue to do whatever it takes to produce them.

"Because there’s a market for fruit as a high-end gift, farmers actually go to extreme measures to increase the fruits flavor and to ensure a blemish-less presentation," writer Yukichi Fukuzawa explains in the Tokyo Times. "Orchards are hand-pollinated with tiny wands, the fruits are each given an individual protective boxes to grow in... This is the reason why you’ll see perfect melons sitting behind velvet ropes and bulletproof glass.“

According to Japanese research and development firm Takasago, fruits were so rare for much of Japanese history that they were categorized as confections and called “water sweets.” Culture and environment, Takasago reveals, played a huge role in Japan developing a luxury fruit market.

In Europe, where Western culture originated, much of the water is hard water, which is difficult to drink, and few crops could provide a source of vitamins throughout the year, so fruits, which were rich in water content and vitamins, were considered essential food in people's lives. Fruits were also the main type of preserved foods, being used for jams, juices, wines, and more. In contrast, Japan has a lot of rain, good quality water, and the availability of an abundance of vegetables and edible wild plants year round, from which water content and vitamins can easily be obtained. For this reason fruits were always considered luxury items and gift items.

Japan’s most expensive fruit shop, Sembikiya fruit parlor, has been run since 1834 by a Samurai-descendant family who claims that they were the ones to start the tradition of giving fruit as gifts, according to the Tokyo Times. The family originally ran the business as a budget shop, but the wife of a second-generation owner switched up the business model to bring in more income.

It is customary in Japan to gift expensive fruits to mark special occasions, like weddings, major business deals and even as a “get well” gift for those recovering in the hospital. It is estimated that somewhere between 80-90 percent of all sales at Sembikiya are gifts.