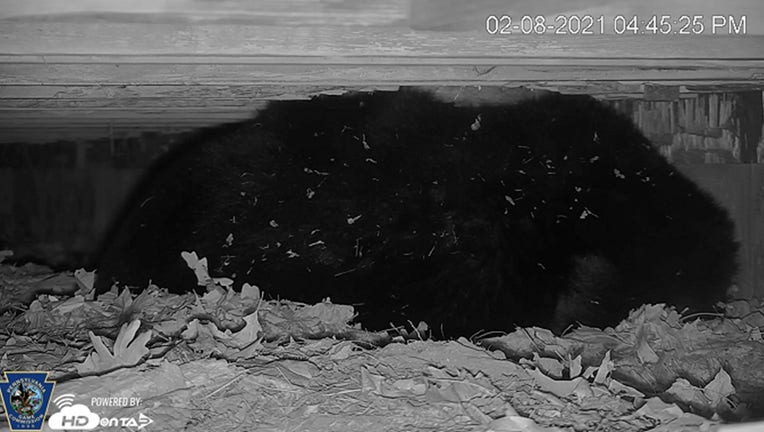 Pennsylvania Game Commission and HDonTap monitor mother black bear and her cubs in the Poconos.

MONROE COUNTY, Pa. - A new bear den is live on camera in Monroe County and the Pennsylvania Game Commission has an eye out for a new mother black bear and her three young cubs under a residential porch.

The Game Commission and HDonTap worked together to provide a live video stream of the bear and her cubs from their temporary den in Monroe County.

The mother and her cubs have made themselves snug in the same location as a black bear and a cub in 2019, under the porch of a home in the Pocono Mountains.

Once that bear and her cub left the residence in 2019, the homeowners placed skirting around their deck. That skirting went undisturbed until just several weeks ago, when they noticed the skirting had been pulled up on a far end. They were then able to record audio of cubs in the location and they reported their findings to the Pennsylvania Game Commission’s Northeast Region Office.

A camera has been re-established in the location. According to the Pennsylvania Game Commission, the mother and her cubs can be expected to remain in this location until about April, when they may move on.

Officials have been careful not to reveal the exact location of the bear to avoid the risk of the hibernating bears being disturbed by human activity.

On the live streaming page, the laws surrounding feeding bears are made very clear, while viewers are also encouraged to refrain from naming the bear and her cubs to respect them as wild animals.

Anyone can watch the bears by clicking here.