Countless Americans and first responders worldwide continued the tradition of climbing stairs to honor the firefighters killed in the 9/11 attacks.

The stair climb pays homage to the New York City Fire Department, or FDNY, fighters who raced up 110 stories of the World Trade Center in a desperate act to save those trapped after two jetliners slammed into the towers on Sept. 11, 2001.

20 years after Sept. 11, Biden says unity is our greatest strength

In a video released the night before the 20th anniversary of the September 11th terrorist attacks, President Joe Biden mourned the ongoing losses of that day.

The Orlando Fire Department posted a video of firefighters in full gear climbing 110 flights of stairs "to pay respect to those who were running into the World Trade Center to help others during the attacks on 9/11 - 20 years ago."

"We are humbled by the turnout today to support the stair climb that honors all of the fallen each year on 9/11," the department wrote on social media.

Even Firefighters in Bristol, England, have taken part in the challenge, climbing Ashton Gate Stadium in solidarity with their American counterparts.

According to the National Fallen Firefighters Foundation, several stair climbing events will take place in September and October. 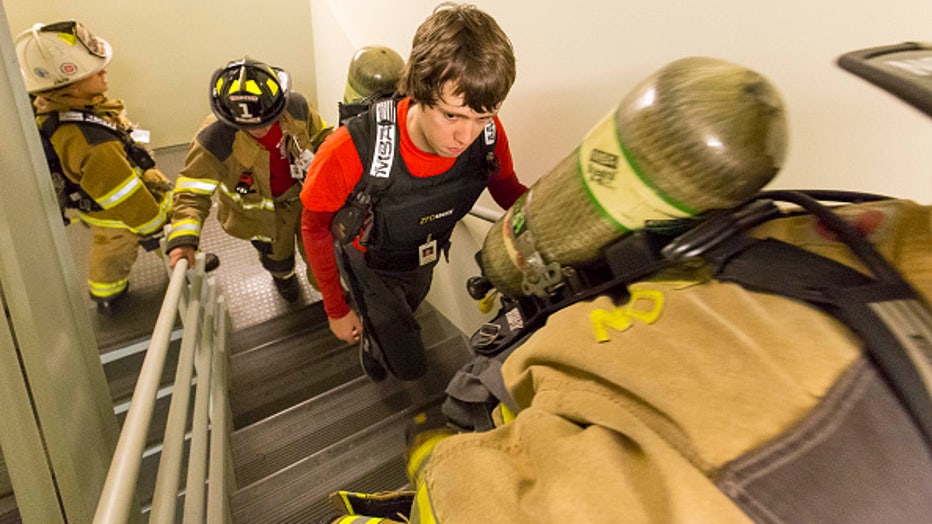 PORTLAND, ME - SEPTEMBER 20: Firefighter Mike Gallagher, center, of the Ellington, Connecticut, fire department was one of about 100 participants to climb the stairs at 2 Monument Square on Sunday to memorialize the firefighters lost on 9/11 and to r

In addition to vertical climbs, many firefighters take part in 5K runs or walks as part of the Tunnel to Towers Series — which honors the sacrifice of Stephen Gerard Siller.

Siller gave his life saving others on 9/11. He was on his way to play golf with his brother after his shift that morning when he got word of a plane hitting the north tower.

He canceled and went back to work. Once he arrived at Brooklyn Battery Tunnel, he strapped 60 pounds of gear on and raced to the Twin Towers.

RELATED: Tunnel to Towers: Brother of firefighter who died on 9/11 made helping others his mission

Siller left behind a wife and five children.

In his honor, the Tunnel to Towers Foundation holds a series of walks, runs and climbs to raise money for a variety of programs benefiting veterans and first responders.

Frank Siller, the foundation's founder and the brother of Stepen Siller, honored those who lost their lives by walking from the Pentagon to Shanksville, Pa. to New York City.

At the end of his journey, Siller will retrace his brother's steps. "Walking through the same tunnel that my brother ran through as a New York City firefighter. He gave his life while saving others," Siller said.

The Associated Press and Chris Williams contributed to this report. This story was reported from Los Angeles.