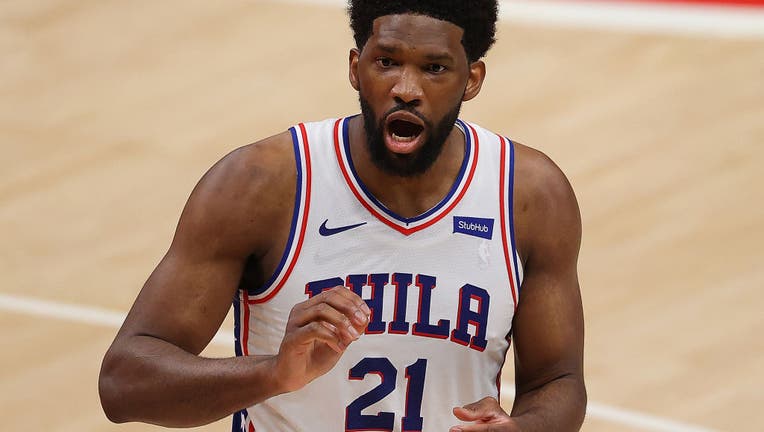 ATLANTA, GEORGIA - JUNE 11: Joel Embiid #21 of the Philadelphia 76ers reacts after drawing a foul from the Atlanta Hawks during the first half of game 3 of the Eastern Conference Semifinals at State Farm Arena on June 11, 2021 in Atlanta, Georgia. NO

PHILADELPHIA - The Philadelphia 76ers have kept their trust in Joel Embiid.

A person familiar with the situation told The Associated Press that Embiid and the Sixers agreed on a four-year, $196 million contract extension that will take the All-Star center through the 2026-27 season. The person spoke on condition of anonymity because the deal was not expected to be formally announced until later Tuesday.

The 27-year-old Embiid was NBA MVP runner-up this season to Denver's Nikola Jokic and led the Sixers to the best regular-season record in the Eastern Conference. The Sixers lost in the second round to the Atlanta Hawks.

Embiid averaged of 28.5 points and 10.6 rebounds last season and became eligible for the NBA's super-max extension. Embiid, the No. 3 overall pick of the 2014 draft, suffered a tear in his right meniscus during the playoffs. He played through the injury and has emerged as Philadelphia's franchise player.

"It just felt like this was going to be our year," Embiid said after the Sixers were eliminated in Game 7. "If there’s one thing I want to say, I gave everything I had. It’s not easy, especially when something always happens at the wrong time. I was ready, this whole playoffs, to just come in and dominate and do what I had to do. The meniscus happened."

Embiid averaged 24.8 points and 11.3 rebounds over his first five seasons in the NBA. Embiid, a native of Cameroon, sat out his first two seasons with injuries and has never played more than 64 games in a season over his career. He missed games this year with a bone bruise on his left knee.

He scored a postseason career-high 36 points in 28 minutes in a Game 3 first-round win over Washington.

Embiid has solidified his future in Philly at the same time fellow All-Star guard Ben Simmons faces an uncertain one with the team after a rough offseason. The Sixers expected to pair Embiid and Simmons as cornerstones who could keep the Sixers East contenders for a decade. Instead, Simmons became the scapegoat for the Sixers' early elimination from the playoffs and his name has been dangled in trade rumors all summer.