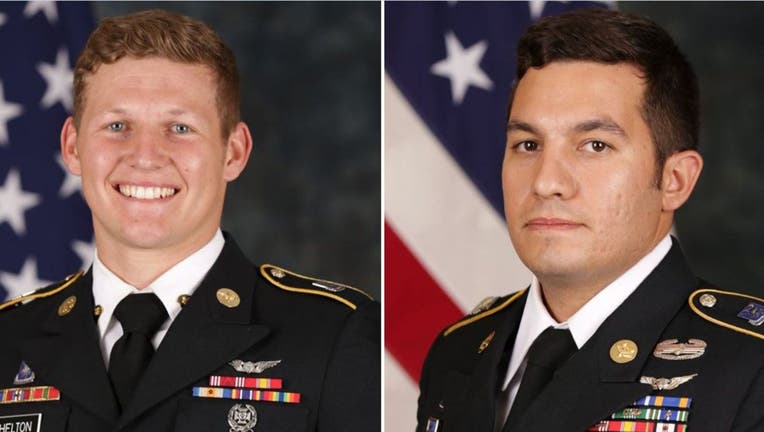 Staff Sgt. Vincent Marketta, 33, of Brick, N.J., and Sgt. Tyler Shelton, 22, of San Bernardino, Calif., were killed in the crash on San Clemente Island and three others on board were injured, according to the San Diego Union-Tribune.

“The loss of Staff Sgt. Marketta and Sgt. Shelton has left a scar in this Regiment that will never completely heal,” said Col. Andrew R. Graham, commander of the 160th Special Operations Aviation Regiment (Airborne). “Their level of dedication to the 160th SOAR (A) and their exemplary service in the Army is the embodiment of what it means to be a Night Stalker and a Soldier.

"Our priority now is to ensure the Families of our fallen warriors receive our complete support as we work through this tragedy together. We ask that you keep Staff Sgt. Marketta, Sgt. Shelton, their Families and fellow Night Stalkers in your thoughts and prayers.”

The U.S. Army Special Operations Command was conducting routine training off the coast of Coronado, Calif. – across the bay from downtown San Diego – when an “aircraft incident" occurred, an Army public affairs officer said, according to FOX 5 in San Diego.

The Army hasn't disclosed any other details about the crash.

A Defense Department official who spoke on condition of anonymity told the newspaper the helicopter had crashed.

The island, about 70 miles west of Coronado, is administered by Naval Base Coronado but is part of Los Angeles County.

Marketta enlisted in 2011 and had deployed multiple times to the Middle East.

Shelton enlisted in 2016 and had deployed to Afghanistan.

Related: US Marine lands deal with Patriots after putting football career on hold to serve

Both Marketta and Shelton will receive the Meritorious Service Medal posthumously, according to the Union-Tribune.

This is the second deadly training incident in California this summer.

Last month, eight Marines and a sailor were killed when an Assault Amphibious Vehicle sank near San Clemente Island.