Homeland Security Secretary Alejandro Mayorkas appeared before the Senate Appropriations Committee on May 12, 2021, and testified about domestic violent extremism in the U.S. and the resources being dedicated to the issue.

WASHINGTON - The heads of the U.S. Justice Department and Department of Homeland Security testified Wednesday about the "elevated threat" of domestic violent extremism before a Senate committee and said more resources are being dedicated to the issue.

Attorney General Merrick Garland and Homeland Security Secretary Alejandro Mayorkas appeared before the Senate Appropriations Committee about their budget needs as both agencies confront the growing threat from domestic violent extremism in America.

In his testimony, Garland noted how the intelligence community has labeled domestic violent extremists as an "elevated threat" in 2021 — particularly White supremacy extremists.

Garland noted that it’s not a crime to espouse extremist views or associate with such hate groups, "but when someone tries to promote or impose an ideology through acts of violence, those acts can be the most dangerous crimes we confront as a society."

"We will use every appropriate tool at our disposal to deter and disrupt such criminal acts and to bring their perpetrators to justice," he told the committee. 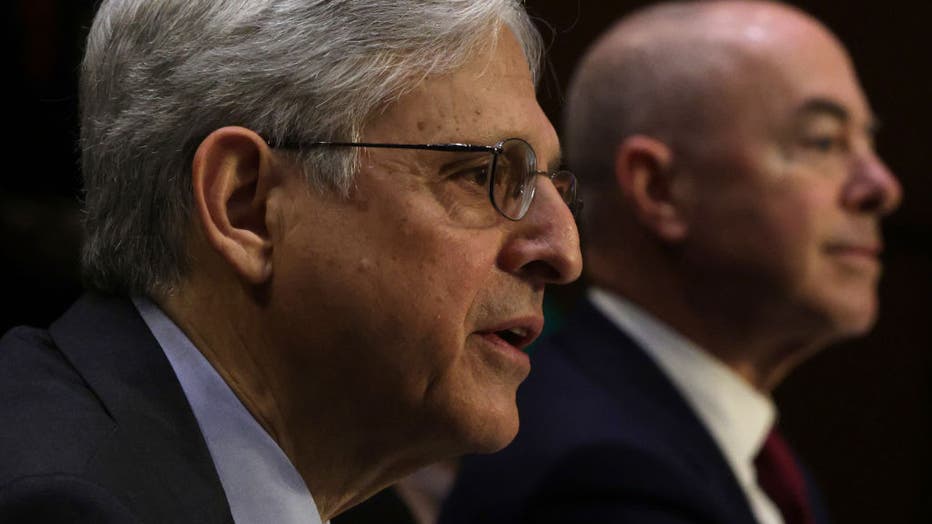 U.S. Attorney General Merrick Garland (L) and Homeland Security Secretary Alejandro Mayorkas testify during a hearing before the Senate Appropriations Committee at Hart Senate Office Building on May 12, 2021 on Capitol Hill in Washington, D.C. The co

Wednesday’s hearing was held amid a series of congressional hearings centered on the deadly riot at the U.S. Capitol earlier this year.

Garland said the DOJ is still in the early days of its investigation of the insurrection on Jan. 6 — having only been a "relatively short" period since the riot by supporters of former President Donald Trump sought to overturn the results of the November election. He noted the large number of separate investigations and huge amount of video and other data that authorities are combing through as they pursue leads in the investigation

More than 430 people have been charged so far in the Jan. 6 insurrection, Garland said.

The riot left five people dead, including Capitol Police Officer Brian Sicknick, who was hit in the head by a fire extinguisher. Sicknick was later ruled to have died of natural causes. Another officer died in an apparent suicide after the attack.

"We will pursue each lead until we’re confident that we will have reached the end," he said.

Garland, who led the investigation into the Oklahoma City bombing in 1995 as a Department of Justice staffer, has previously said the same domestic extremism that led to the bombing still exists today.

"Although many years have passed, the terror perpetrated by people like Timothy McVeigh is still with us," Garland said last month while speaking at a remembrance ceremony in Oklahoma City. McVeigh was ultimately convicted and executed for carrying out the attack.

Meanwhile, Mayorkas similarly vowed that the Department of Homeland Security will increase its monitoring of domestic extremist groups and their online activities. DHS announced this week a new branch within the department to combat terrorism and targeted violence and to help produce timely intelligence needed to combat such threats.

In his testimony, Mayorkas said terrorism threats the U.S. faces have "significantly evolved" since the DHS was created in the wake of the 9/11 terrorist attacks.

The DHS chief told lawmakers that such threats are often "fueled by false narratives, conspiracy theories and extremist rhetoric spread throughout social media and other online platforms."

He added that the department also launched an internal review to address potential threats of extremists within its own ranks.

Many of the recent congressional hearings centered on the Capitol riot have sought to analyze law enforcement’s response in the lead-up to the insurrection and the aftermath. The Capitol Police have faced criticism for being badly overrun, the FBI for failing to share with sufficient urgency intelligence suggesting a possible "war" at the Capitol, and the Defense Department for an hourslong delay in getting support to the complex despite the violent, deadly chaos unfolding on TV.

Former acting Defense Secretary Christopher Miller during the Capitol riot also testified Wednesday before the House Oversight Committee, one of two senior Trump administration officials who appeared during the hearing and defended their actions related to the insurrection.