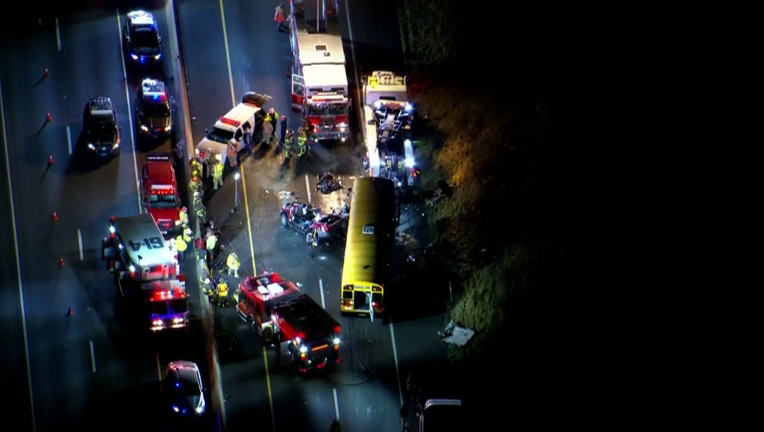 Skyfox over the scene of a fatal multi-vehicle accident in Berks County.

The first crash happened around 8:30 p.m. when a 69-year-old Georgia woman who was driving an empty school bus failed to stop in a construction zone on Interstate 78 near Hamburg, Berks County, and slammed into the back of a sedan, killing the 20-year-old driver, authorities said. The bus then went over the top of the sedan and rear-ended an SUV, killing the front-seat passenger, police said.

The bus was new and was being driven to Canada for delivery, police said.

About two hours later, the 64-year-old driver of a tractor trailer that was being detoured off I-78 because of the earlier crash failed to slow down for stopped traffic and rear-ended a van, causing a chain-reaction crash involving three other vehicles. Killed were a 24-year-old woman from Reading who was riding in the back seat of a sedan, and a 54-year-old man from Williamsport who was driving an SUV, police said.

The names of the victims were not immediately released. No one had been charged as of Wednesday morning as police continued to investigate.