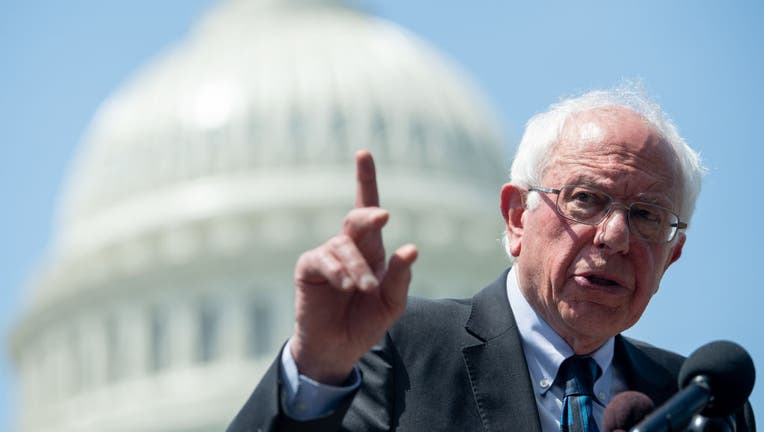 US Senator Bernie Sanders, Independent of Vermont, speaks during a press conference to introduce college affordability legislation outside the US Capitol in Washington, DC, June 24, 2019. (Photo by SAUL LOEB / AFP) (Photo by SAUL LOEB/AFP via Getty I

Sen. Bernie Sanders is taking aim at the effort to recall Gov. Gavin Newsom of California as "a bold-faced Republican power grab" in a new TV commercial and digital ad supporting the embattled Democratic governor.

The running of the statewide spot comes with just 15 days to go until California’s Sept. 14 recall election, with the latest public opinion polls suggesting that those likely to cast ballots are divided on whether to recall Newsom.

"At this unprecedented moment in American history, when we’re trying to address the crisis of climate change, guarantee health care for all, and pass real immigration reform, the last thing we need is to have some right-wing Republican governor in California," the longtime senator from Vermont says in the spot, speaking directly to camera.

"The Sept. 14 recall of Gov. Newsom is a bold-faced Republican power grab," Sanders charges in the ad. "Don't let it happen. Please, return your ballot or vote no in person by Sept. 14."

The progressive champion from Vermont who came in second to now-President Biden in the 2020 Democratic presidential primaries remains extremely influential among those on the left. And Sanders may retain plenty of influence in California, a state he won by eight points over Biden during last year's Democratic nomination battle.

Sanders becomes the second leading progressive to star in a commercial taking aim at the recall and supporting Newsom. Sen. Elizabeth Warren of Massachusetts, another 2020 Democratic presidential candidate, appeared in a similar spot in July.

State election officials two weeks ago began mailing ballots to California’s 22 million registered voters, as the Republican replacement candidates on the ballot stepped up their attacks on the Democratic governor and Newsom kicked into high gear his efforts to encourage supporters to cast ballots.

Newsom and his allies acknowledge that they need a strong turnout to counter Republican voters motivated to cast ballots in hopes of ousting the governor.

The latest public opinion polls indicate those likely to vote in the recall contest are divided on ousting Newsom. The surveys also point to how crucial turnout will be in a state where registered Democrats greatly outnumber registered Republicans. One of the recent surveys, a UC Berkeley Institute of Governmental Studies/Los Angeles Times poll conducted late last month, indicated that Republicans appear to be more motivated to cast ballots in the recall contest. Although Republicans only account for roughly a quarter of all registered voters in California, the poll suggested they made up a third of those most likely to vote in the recall election.

Newsom’s recall campaign team, formally known as Stop the Republican Recall, also went up on Monday with a second TV commercial explaining to voters how to fill out the ballots they’ve received in the mail.

"Here’s what you need to know about the Sept. 14 recall," says the narrator in the spot. "Voting yes elects an anti-vaccine Trump Republican. Voting no keeps Gavin Newsom fighting the pandemic based on science, compassion and common sense. And if you don’t vote, we could have an anti-vax Republican Governor of California."

The ad is the latest to take aim at conservative talk radio host Larry Elder, who jumped into the race just six weeks ago. Most of the latest surveys indicate that Elder’s the front-runner among the 46 gubernatorial replacement candidates on the ballot. Both of the spots were first reported on Monday by Politico.

The release of the ads comes as the Democratic Governors Association (DGA) moved $3 million to Newsom’s recall defense efforts. Fox News confirmed the transfer, which brings to $4.5 million the DGA’s contributed to the California governor this year.