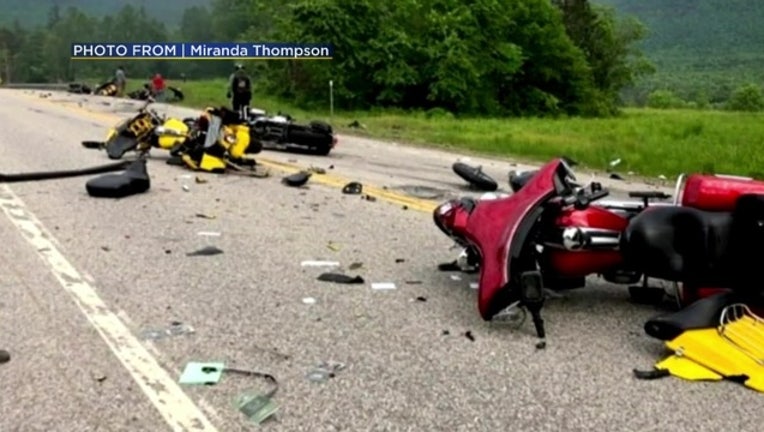 COLUMBIA, N.H. - A long-planned Blessing of the Bikes ceremony for motorcycle enthusiasts became a scene of mourning and reflection Sunday as about 400 people paid tribute to seven bikers killed in a devastating collision with a pickup truck.

The victims of the wreck Friday evening were members or supporters of the Marine JarHeads - a New England motorcycle club that includes Marines and their spouses - and ranged in age from 42 to 62.

"When they fall, we all fall," said Laura Cardinal, vice president of the Manchester Motorcycle Club, adding that fellow bikers will support the families of those who died. "Those families, they're going to go through a lot now. They have a new world ahead of them."

A pickup truck towing a flatbed trailer collided with a group of 10 motorcycles on a two-lane highway in the small town of Randolph, leaving victims strewn on the grass amid their shattered bikes. The cause of the crash was under investigation, and no immediate charges were filed.

Blessing of the Bikes ceremonies are held in many locations as a way to give prayers for a safe season. Sunday's event, situated about an hour from the accident site, was expected to draw maybe 100 or 200 people before it was transformed by tragedy. 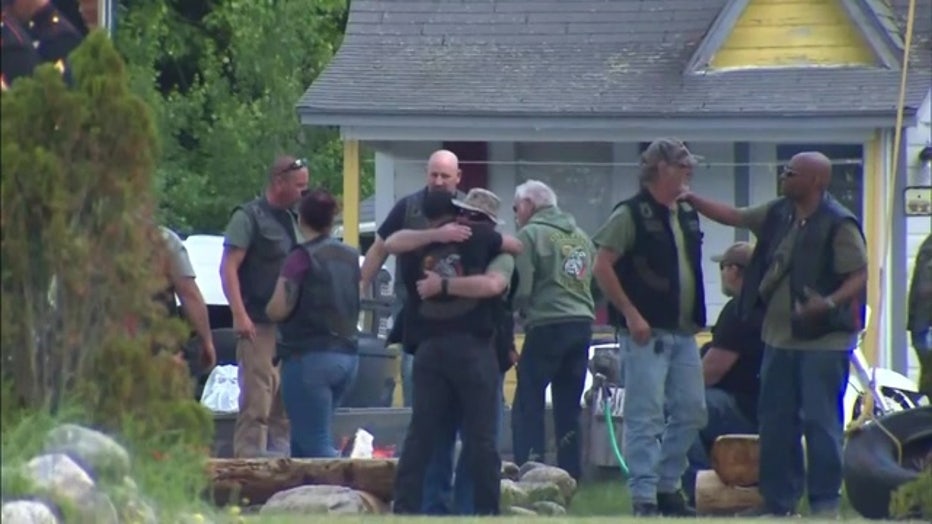 The Rev. Rich Baillargeon presided, blessing the bikes using a branch dipped in holy water as they filed by, and held a moment of silence and prayer for the victims. One biker got up to say a prayer but got choked up and couldn't finish. The ceremony also included a bugle playing of taps.

Many of the bikers wore jeans and leather jackets with their club patches and rumbled in on their Harley-Davidsons. The outdoor gathering took place on the property of a former church, with bikers parking in rows in the parking lot and on the grass on a warm, sunny day as vendors sold corn dogs, french fries, pizza, sausage and lemonade.

Gary and Sheila Judkins came from Sumner, Maine, in part because of the crash, saying being there was a way to feel connected to other riders.

"It's a positive thing for bikers. And if anything, bikers need something positive," Gary Judkins said.

One person injured in the wreck remained hospitalized in stable condition. Relatives of all but one of the victims could not be reached for comment or their numbers were not listed. The state attorney general's office said the Ferazzi family had asked that reporters not contact them.

Mazza Jr.'s family described the former Marine and father of two as a quiet, self-starter who fell in love with motorcycles at an early age and always seemed to best anyone he competed against. When he got out of the Marines, he worked in the defense industry and then the construction business. Along with bikes, relatives said Mazza Jr. was passionate about judo and hunting when he was growing up. In the past two decades, his father Albert Mazza said he had very little contact with his son partly because he lives in Kenly, North Carolina.

"He was a young man who could do anything. I competed in all kinds of things in my life ... and everything he tried to do, he beat me in," Albert Mazza said. "He was a natural at everything ... He was a tough, young guy who didn't know how to quit ... I was always proud of him and I always bragged on him because I knew he was a better man than I was."

Joseph Mazza, Mazza Jr.'s uncle who lives in Haverhill, Massachusetts, said he was still dealing with the accident and trying to comprehend how so many bikers died in one accident.

"The truck was coming in the opposite direction. It's hard to figure how he could hit 10 motorcycles without getting out of the way," Joseph Mazza said. "Right now, the details are very vague. I'm very confused ... I need more information." 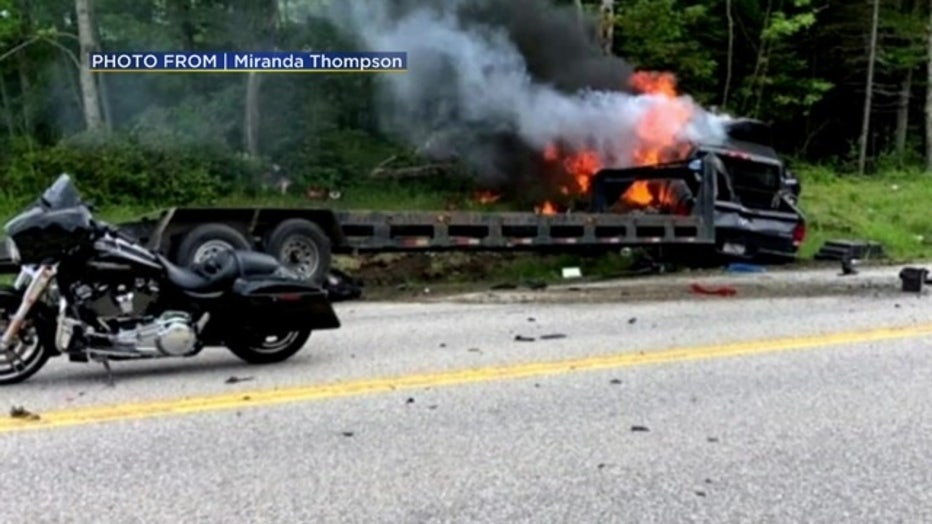 The tragedy left the close-knit motorcycle community in shock, with many remembering their own close calls on the road.

"Seven people. C'mon. It's senseless," said Bill Brown, a 73-year-old Vietnam War veteran and motorcyclist, who visited the accident scene Saturday to plant flags. "Somebody made a mistake, and it turned out to be pretty deadly."

The pickup driver, Volodoymyr Zhukovskyy, 23, an employee of a Springfield, Massachusetts, trucking company, was not seriously hurt. The National Transportation Safety Board, which is investigating, said he was interviewed at the scene by police and allowed to return to Massachusetts.

A man reached by phone who identified himself as Zhukovskyy's father said his son is cooperating with the investigation and was not available to talk to a reporter.

Authorities asked for the public's help in the form of videos, photos or other information about the accident or the vehicles.