TULSA, Okla. - Video captured a car plowing into the front of a Twisters Wireless store in Tulsa, Oklahoma and police are asking for the public’s help identifying the bold culprits.

At 4 a.m. on Thursday, outdoor security cameras recorded a taupe-colored 1996 Buick Century turning around in a parking lot.

A few seconds later, the car is seen accelerating, so much so that the front end of the car jumps a bit and crashes into the storefront window.

As soon as the car is inside, the driver of the car, wearing what appeared to be a black ski mask and all black clothing, jumps out of the car and appears to take merchandise from the store display cases. 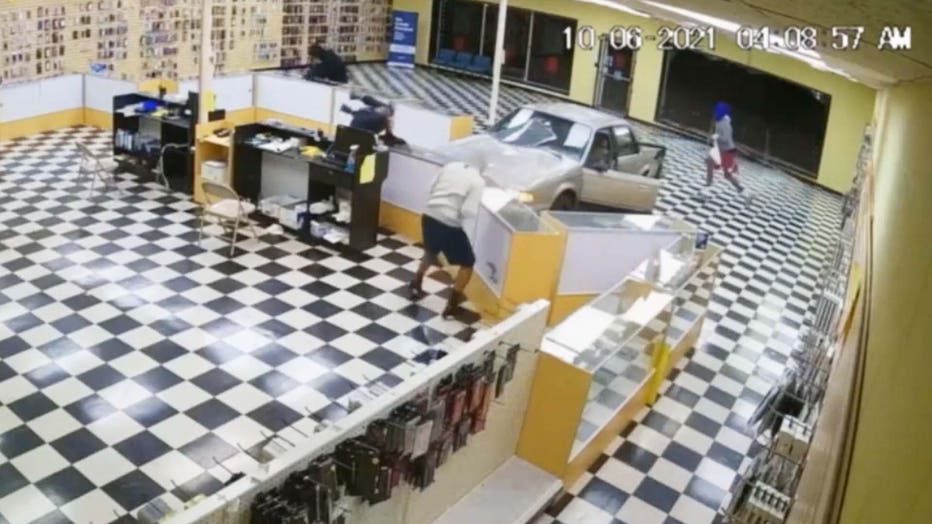 RELATED: Robber pulls down his mask, letting surveillance cameras get a clear image of his face

As the car continues to roll forward, another three suspects can be seen running into the store, taking more items. Investigators said the suspects stole more than $15,000 worth of phones, tablets and watches.

Once the burglars were done, all four appeared to abandon the car and flee the scene. The entire robbery took no more than a couple of minutes to execute, according to the police department.

Detectives from the Tulsa Police Department believe the car was also stolen and suspect there may have been a getaway driver waiting outside while the other four individuals allegedly robbed the store.

Anyone with information can contact the Tulsa Crime Stoppers at 918-596-COPS and could be entitled to a cash reward.