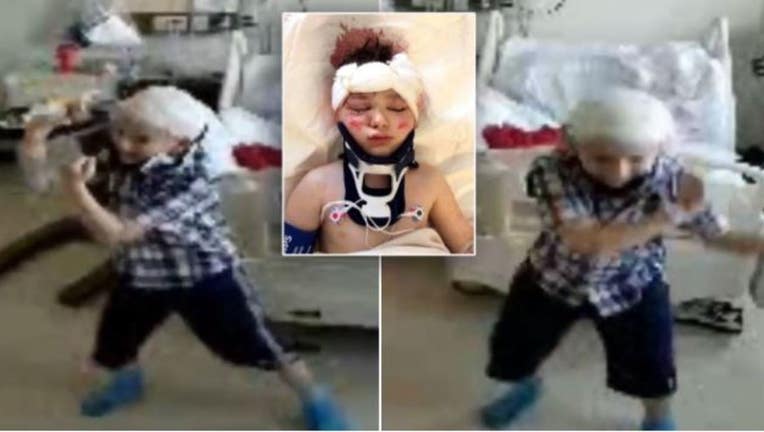 INSIDE EDITION - After one very long month of suffering, a 7-year-old boy has finally been sent home from a New York hospital.

Kaden Mitchell nearly lost his young life after two Rottweilers attacked him in a family friend's backyard on June 6.

He needed more than 400 stitches and staples, mostly on his head, and was placed in a medically induced coma following the mauling.

"It's been a long, hard month," dad Kenneth Mitchell told InsideEdition.com Thursday, as he left to pick up his son from the Women and Children's Hospital in Buffalo. "He's very happy to go home."

In a video taken by his step-grandfather, the little boy is seen dancing across his hospital room at the prospect of freedom. His head, which is still healing, was covered in bandages.

The child has a stent in his neck, where an artery to his brain was badly damaged when one of the dogs clamped down on his throat, Mitchell said. He will have to live with that for the rest of his life.

Kaden's ears were nearly ripped off and had to be surgically reattached. He has endured multiple surgeries and suffered a minor stroke that left him with a lopsided smile, his dad said.

But his grin eventually returned, as Thursday's video clearly showed.

Mitchell said Kaden and a 4-year-old girl had been playing at a babysitter's house, when the woman stepped outside to cage her two Rottweilers.

The children busted through the back door, thinking the dogs were locked up, Mitchell said.

"The little girl ran one way and my son ran another and the dogs went after him," Mitchell said.

The owner grabbed the animals and tried to pull them off while screaming for help.

The child was rushed to the hospital, where Mitchell was already waiting. A neighbor had phoned him at work, he said, and told him about the attack.

"He was awake when they arrived," Mitchell said of his son.