RAYMOND, N.H. - Police said that a juvenile will face animal cruelty charges after a rabbit was rescued from a river with a rope tied around her neck and a 5-pound weight attached to it on Sunday.

Raymond Police Lt. Chad Shevlin responded to the incident on Lamprey River in Raymond, New Hampshire, and called it “disturbing.”

“I really haven’t seen anything this bad,” he said. 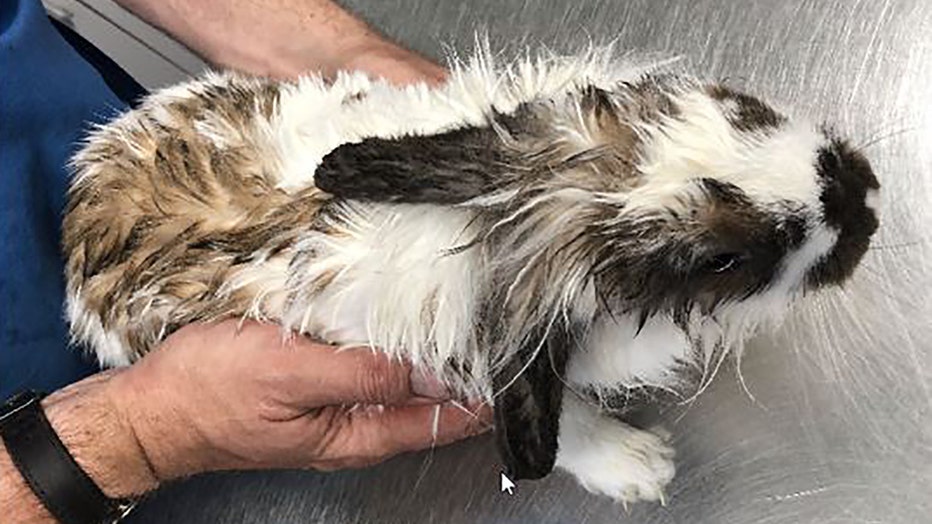 Police said Monday that a juvenile will face animal cruelty charges after a rabbit was rescued from a river with a rope tied around her neck and a 5-pound weight attached to it on Sunday. (Photo Courtesy: Lt. Chad Shevlin/ Raymond Police Department)

Lothrop told the New Hampshire Union Leader that the rabbit was able to keep its head above the water to avoid drowning.

Eaton discovered the rabbit while he was kayaking. He then called over to Lothrop and asked if he had a knife, the paper reported. Lothrop then handed Eaton a small knife to cut the rope.

“We were lucky. We just came together with our resources,” Lothrop told the Union Leader.

The two men then alerted the authorities, who brought the rabbit to Candray Pet Care Center for care.

The rabbit was a family pet that belonged to the juvenile and will not be returned. Shevlin said that police have contacted the Society for the Prevention of Cruelty to Animals.

“I feel that whoever did this should be evaluated or answer for the charges because there is some underlying issue,” Shevlin said, adding that it was an isolated incident.

The lieutenant said it’s unclear if the rabbit was dropped from the bridge or placed in the water from the edge of the river.

Lothrop was also a former police officer who said the incident was upsetting but glad the rabbit was rescued, the paper reported.

“What really kind of bothered me the most is that with abuse of an animal like that, there’s oftentimes some deeper things going on,” he said.

But the bunny is safe, alive and well, Shevlin said Tuesday.

Matthew Cobb of the Candray Pet Care Center said the rabbit is being treated for water aspiration.

“She is a friendly, young rabbit and clearly used to being handled.  We will continue nursing care for the next few days with the main concern being the possibility of pneumonia developing,” Cobb said.

“I can't really comment on why someone would do such a thing, it is beyond me,” he said.