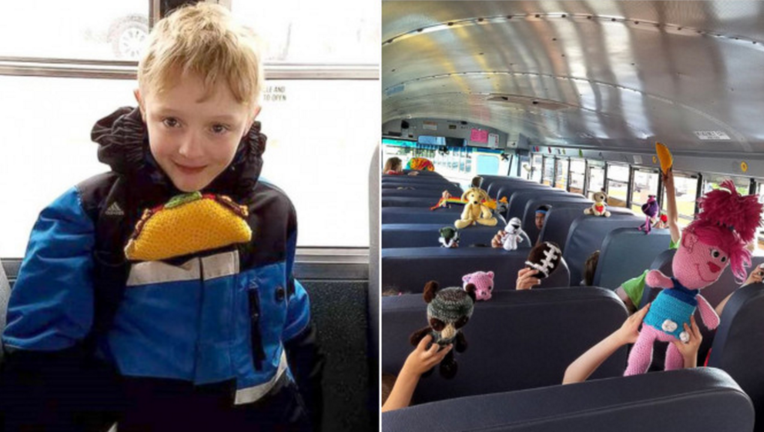 (INSIDE EDITION)--A Wisconsin bus driver brought her hobby to work with her and in the process brought joy to a group of children.

Trudy Serres, who works for Oconomowoc transport, has been crocheting for 3 years and often does so while she waits for the kids elementary kids she drives to board the bus in the afternoon.

Serres said it all started with one student, Vincent, who asked her if she could crochet a taco, which she did and then gave to him.

"He'd always say he wanted to see the finished product of whatever I was making. And one day he goes 'you think you you can make a taco?' and I said 'I could try,'" Serres told InsideEdition.com. "I gave it to him because I don't need a taco. And he showed it to every kid on the bus."

Before Serres knew it, most of her students were asking her if she could make them something as well.

She began crocheting things for every student who wanted something. The requests included ice cream cones, Pokemon characters, hockey players, fruits, cats, an owl, and more.

Serres spent three months making the children's requests - all 34 of them.

"Each day I would come on the bus with a finished product. Before I got to their stop, I'd have it on the dashboard for them," Serres said. "I just did it. I figured if I've got the time in between my route I couldn't just do it for one child. I had to do it for all."

Local parents took notice of Serres' kind deed and noted how much their children loved the toys.

"She really cares and loves all the kids. She is my boys' mom when they are on her bus," Peggy Lamon, Vincent's mom, told InsideEdition.com.