Governor Wolf announces 24 counties will reopen on May 8th

HARRISBURG - As swaths of Pennsylvania prepare for a limited reopening Friday, some fed-up business owners are jumping the gun and have resumed serving customers in defiance of Gov. Tom Wolf’s shutdown order.

A salon and a gym in Blair County both reopened last week, declaring Wolf had no right to keep them closed during the pandemic. Blair County, about midway between Harrisburg and Pittsburgh, has reported only 25 coronavirus infections and no deaths.

“I had to save my business,” Julie Potter, who has owned Tame Your Mane salon in East Freedom for 25 years, said Wednesday. “I couldn’t let it end like that.”

The salon has done brisk business since reopening Friday. Customers wear masks and undergo temperature checks as they enter, and equipment and chairs are wiped down frequently, Potter said.

The Gorilla House Gym, in Altoona, has also reopened, flouting a business shutdown now in its seventh week. The gym was cited by local police and code enforcement — carrying potential fines of $10 to $50 — but the owners say they have no intention of closing again.

“We just decided to do it. We didn’t ask permission to do it. We just did it, and we’re going to keep doing it,” gym co-owner Ray Ross told the Altoona Mirror. “Someone had to take a stand. Enough is enough.”

At least for now, Blair County and most of the rest of Pennsylvania remains on “red” in Wolf’s color-coded reopening plan, meaning residents are supposed to stay home and “non-life-sustaining” businesses like barber shops, gyms and clothing stores are supposed to be closed.

In hard-hit suburban Philadelphia, still under the “red” designation, Giovanni’s barber shop owner Nichole Missino said that she and her six employees have been unable to get unemployment compensation and collectively decided to reopen.

“We just all came to the decision, ‘We’re going to have to open because pretty soon we’re going to run out of money to feed our families,’” said Missino, whose shop is in Media.

Barbers are trained to contain infectious diseases, Missino said, and she plans to reopen Saturday with plenty of additional safety precautions, including masks, face shields and partitions between barber chairs. Still, police warned her they would revoke her certificate of occupancy if she went through with it, she said.

New coronavirus cases below 1,000 for 4th straight day in Pennsylvania

With economic losses mounting, some business owners and Republican lawmakers are demanding that Wolf, a Democrat, reopen the state more quickly. Wolf plans to ease some pandemic restrictions in 24 counties that have seen relatively few virus cases — covering 1.5 million of the state’s 12.9 million residents — but has said he wants to see steeper declines in new infections before reopening more of the state.

Several legal challenges to Wolf’s business shutdown have failed, including one that was turned away by the U.S. Supreme Court on Wednesday.

Wolf and other officials have said that businesses that ignore his shutdown order risk spreading the virus. Businesses that open prematurely, before their workers and customers feel it's safe, are “going to have trouble inspiring confidence,” he said Wednesday.

The state is largely relying on voluntary compliance by businesses instead of enforcement to make sure they abide by the shutdown. State police have issued 312 warnings but only one citation, to a Lebanon County roofing business that had already been warned twice about staying open. The Pennsylvania Liquor Control Board, another state agency tasked with enforcement, has suspended four licenses so far.

The state also has an online “COVID-19 Complaint Form” that allows people to report workplaces that are operating in violation of the shutdown, or, for those permitted to remain open, that aren't adhering to social-distancing guidelines. More than 7,000 complaints have been filed to date, though many of them were lodged by pranksters or protesters who ridiculed it as a “snitch form," according to the state Health Department.

FOX 29 journalist Joyce Evans talks to the owners of a Havertown tuxedo shop in need of help during the coronavirus after being open 65 years.

“We push back heavily on the snitch form narrative,” spokesman Nate Wardle said. “This is for people who are concerned about their public health.”

It’s not only mom-and-pop operations that have defied Wolf. Statewide, some corporate behemoths have also ignored the business shutdown.

Garden centers were supposed to close their in-person retail operations under Wolf’s March 19 order, and many did. But Lowe’s and Home Depot continue to sell garden products at stores throughout Pennsylvania, even though the shutdown order covered garden centers attached to larger retail stores. The governor’s office wrote to their corporate offices on April 7 to remind them of the shutdown order, to no avail.

Home Depot said Wednesday that “many essential items” are in the outside garden area of its stores, including building materials, retaining walls, and drainage and repair products. 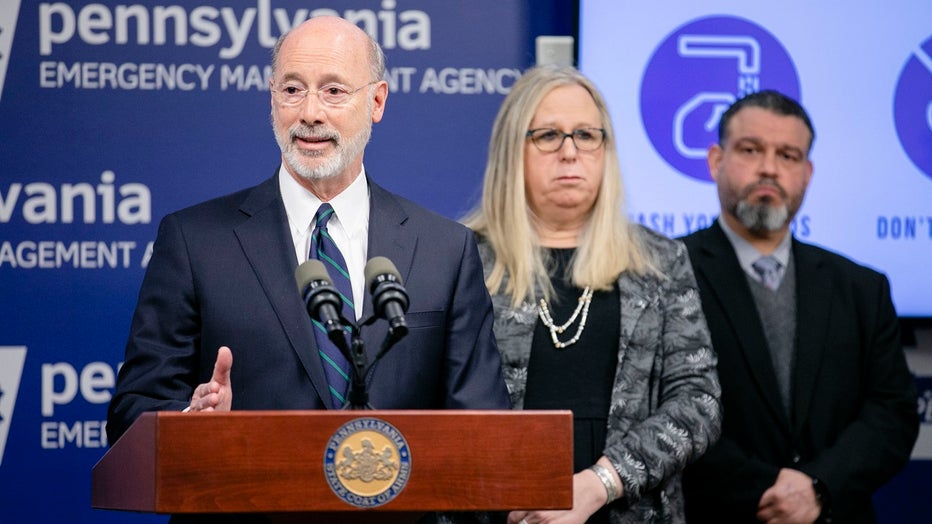 “We’ve been partnering with the state for some time to share our efforts to keep our associates and customers safe,” Home Depot spokesperson Margaret Smith said in a written statement.

Some customers, weary of the shutdown, are supportive of businesses that take a chance on reopening.

At Tame Your Mane, 70-year-old customer John Black said Wednesday he wasn’t especially concerned that he was risking his health by getting a haircut — his first in seven or eight weeks — even though he’d had a heart attack seven months ago.

“You got to get on with your life and get the country opened up,” Black said. “As long as you watch what you're doing.”'