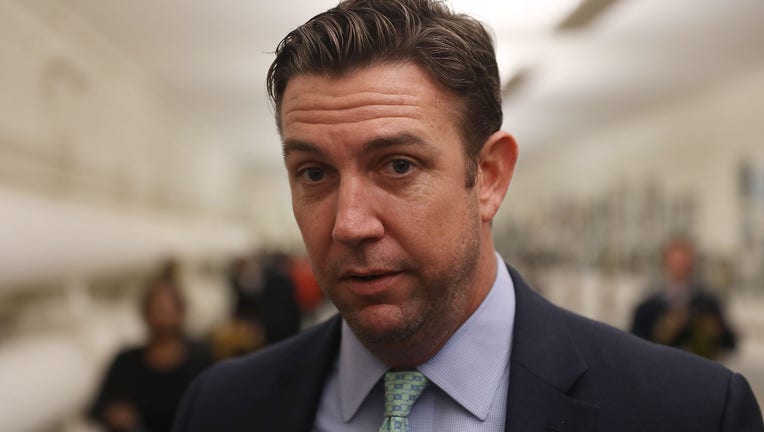 WASHINGTON, DC - JANUARY 10: Rep. Duncan Hunter (R-CA) speaks to the media before a painting he found offensive and removed is rehung on the U.S. Capitol walls on January 10, 2017 in Washington, DC. The painting is part of a larger art show hanging i

The San Diego-area Republican did not provide a specific date for his departure in a two-sentence statement. He previously indicated he intended to leave Congress but had provided no time frame.

“Shortly after the holidays, I will resign from Congress. It has been an honor to serve the people of California’s 50th District, and I greatly appreciate the trust they have put in me over these last 11 years,” Hunter said.

Hunter had long dismissed the charges as a politically motivated conspiracy to drive him from office. In an abrupt turnaround Tuesday, he pleaded guilty to a single charge of conspiring with his wife to illegally use at least $150,000 in campaign cash for personal expenses, including his daughter’s birthday party at a posh hotel and an outing with friends at a French bistro.

He is scheduled to be sentenced in March. The charge carries up to a five-year sentence, but the deal calls for prosecutors to recommend much less time to a judge.

Members of Congress are paid monthly, on the first day of the month. If Hunter resigns after Jan. 1, he apparently would pocket another month of his $174,000 annual salary. Prosecutors have said Hunter and his wife were in financial disarray.

Hunter and his wife were initially charged with 60 criminal counts. Prosecutors accused them of spending about $250,000 in campaign funds on things like family vacations to Italy and Hawaii, private school tuition for their children and airline tickets for their family’s pet rabbit.

Prosecutors also revealed that Hunter spent some of the money on romantic relationships with lobbyists and congressional aides.

An early supporter of President Donald Trump’s 2016 election bid, Hunter is the second Republican congressman to plead guilty to federal charges this year. In October, former four-term Republican Rep. Chris Collins of New York pleaded guilty in an insider trading case, a day after he resigned from Congress.

Earlier this week, House leaders sent a letter to Hunter urging him not to vote in the the chamber following his guilty plea, citing legislative rules.

It was not immediately clear if a special election would be held to fill the seat for the rest of Hunter’s term.

According to the secretary of state’s office, Democratic Gov. Gavin Newsom is not required to schedule a special election because Hunter is leaving after a Dec. 6 deadline. Hunter was facing reelection next November.

When Hunter departs, he will become the fourth House Republican this year to resign and leave Congress before their term expires. That’s in addition to 22 others who have announced they are not seeking reelection in 2020.

That compares to one House Democrat who has quit and nine others who aren’t running for reelection. The number of GOP departures is one reason Republicans are considered unlikely to capture a House majority in next year’s election.

Associated Press writers Alan Fram in Washington and Kathleen Ronayne in Sacramento contributed to this report.