Satellite imagery from Planet Labs Inc., taken on July 4 and July 6, appears to show changes in the area close to the quake’s epicenter.

RIDGECREST, Calif. - The powerful 7.1 earthquake that shook Southern California on Friday appears to have also caused a crack in the earth’s surface that was captured by satellite cameras from space.

Satellite imagery from Planet Labs Inc., taken on July 4 and July 6, appears to show changes in the area close to the quake’s epicenter. Planet Labs Co-Founder and CEO Will Marshall tweeted the images, adding that the before and after “clearly show surface rupture.”

The earthquake was reported at 8:19 p.m. Friday and was centered 11 miles from Ridgecrest, where a magnitude 6.4 quake also struck on Thursday, according to the U.S. Geological Survey.

Friday’s quake initially registered as a 7.1, but was downgraded to a 6.9, then upgraded back to a 7.1 by the USGS. 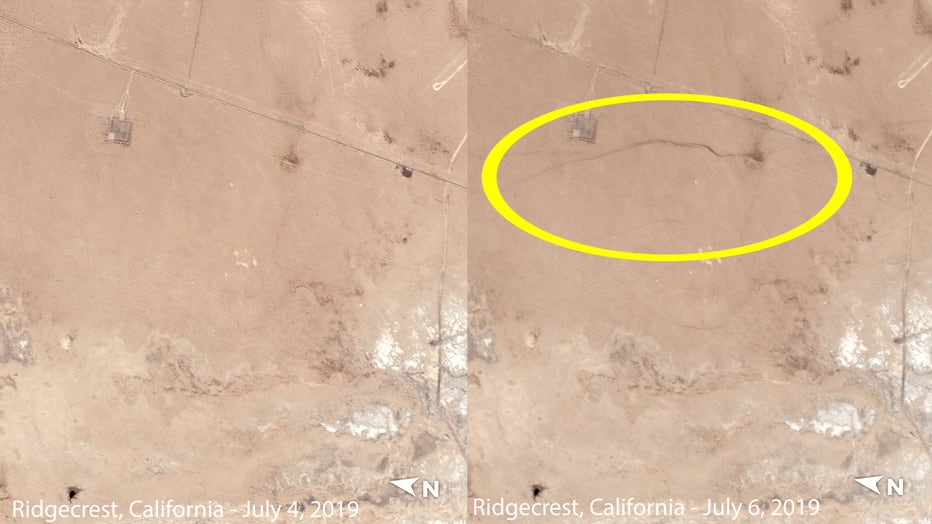 In addition to changes in topography in the area, the temblor led to structural damage of homes, shattered glass, power outages and more.

Dr. Lucy Jones, a seismologist at the California Institute of Technology and USGS veteran, said the 7.1 earthquake was considered the “main event” in an “earthquake sequence.” Jones added that Thursday’s magnitude 6.4 was labeled a “foreshock,” an earthquake that precedes a larger temblor.

Multiple aftershocks have rattled the Ridgecrest area since the large quake.