If a picture is worth a thousand words, a California woman's ID photo says a lot about life during the pandemic.

LAGUNA HILLS, Calif. - Like many people, Huntington Beach resident Leslie Pilgrim had been putting off her next trip to the DMV.

"It had been on my to-do list for a while," said Pilgrim.

She needed to go to the DMV in person, in order to present the necessary documentation to obtain a REAL ID, which will be required to fly domestically beginning Oct. 1, 2021.

Pilgrim visited the DMV in Laguna Hills in early February and said that the line at the DMV wrapped around the building.

"It was unlike any other DMV experience I ever had," she said.

Pilgrim said the agency had implemented several new COVID-19 safety protocols and that the staff was working incredibly hard to make sure everyone was in compliance and practiced social distancing.

"I decided I wasn't going to be difficult," Pilgrim told FOX 11.

After over two hours in line, Pilgrim said her biggest fear was being sent to the back of the line for not following COVID-19 protocols, so, being mindful of others, she chose to not remove her mask until she was told to do so.

She said she immediately knew that the mask in her photo was an issue, so she waited until the DMV employee noticed that she still had her mask on in the photo.

"He must have realized, 'well that can't work,' so he said, 'now you can take your mask off and look into the camera,'" said Pilgrim.

After the DMV employee snapped the second image of Pilgrim, without her mask on, she assumed the mistake was fixed and finished up her appointment and called it a day.

A short time later, Pilgrim got a letter from the DMV containing her new REAL ID, and to her surprise, they used her masked photo.

"It is a little astonishing to me that, I am assuming it had to go through many phases, and it wasn't flagged in any of those stages," said Pilgrim. 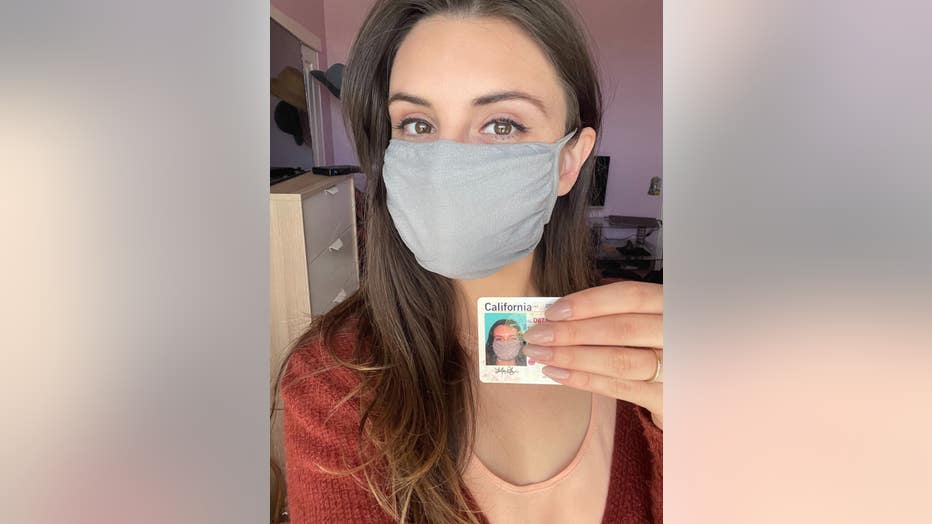 The DMV told her that it is a valid, government-issued ID and that she could keep it, if she chose to, for the next five years. However, Pilgrim said she intends to get a new ID because she "doesn't want to risk it with TSA." She has a new DMV appointment on Friday and plans to frame the mask ID for her kids one day.

"I was raised to see the humor in everything, so to me, at the end of the day, this is funny," Pilgrim said. "With all the things happening in the world right now, this is an incredibly minor inconvenience."