LOS ANGELES - Amid the devastating loss of life caused by the novel coronavirus, several obituaries written by family members of those claimed by COVID-19 have expressed frustration on how certain lawmakers are handling the ongoing pandemic.

The obituary for a North Texas woman who died from COVID-19 puts blame on the "carelessness" of politicians, and added that her death could have been prevented.

The obituary for Isabelle Odette Hilton Papadimitriou, 64, which was published Tuesday by The Dallas Morning News, described her as "a compassionate spirit" and "a ray of light in everyone's life."

"Her undeserving death is due to the carelessness of the politicians who continue to hedge their bets on the lives of healthcare workers through a lack of leadership, through a refusal to acknowledge the severity of this crisis, and through an inability and unwillingness to give clear and decisive direction on how to minimize the risks of the coronavirus. Her death could have been prevented," the obituary said.

Papadimitriou, who reportedly worked as a respiratory therapist, died on July 4 after a week of battling COVID-19.

Her daughter, Fiana Paulette Tulip, also wrote an op-ed published by the Austin American-Statesman, in which she invited Texas Gov. Greg Abbott to her mother's funeral, and blamed his "inaction and active denial of the devastation from COVID-19" for the thousands of COVID-19 deaths in Texas.

According to FOX 10 Phoenix, Arizona Gov. Doug Ducey was invited earlier this month to a vigil at the state capitol by the daughter of a 65-year-old man who died of COVID-19.

KJZZ reported that Mark Urquiza’s family wrote on Facebook that he had believed it was safe to resume his normal activities because of Ducey’s choice to end a stay-at-home order on May 15.

Urquiza was reportedly placed on a ventilator on June 26 and died four days later.

His daughter, Kristin Urquiza, wrote in a letter to Ducey that her father became ill with the virus “during the period you forbade local governments from implementing their own safety measures, such as mandating the wearing of masks.” 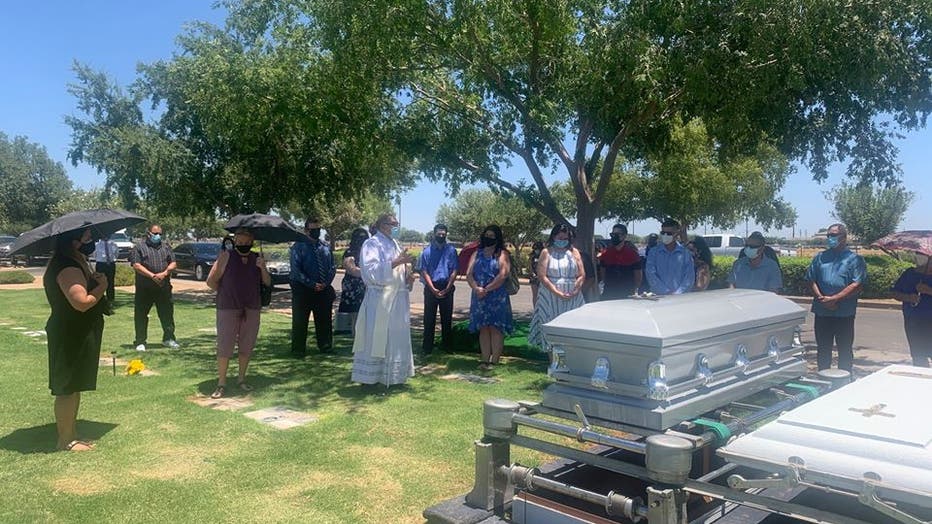 Photograph of the funeral held for Mark Urquiza. (Courtesy of Christine Keeves)

In Iowa, teachers have even gone so far as to write their own obituaries, sending them to Gov. Kim Reynolds after she announced last week that schools must hold at least 50 percent of classes in-person despite a surge in confirmed cases.

“I have prepared my obituary and am sending it to Gov. Kim Reynolds to express my concern regarding the absence of a statewide mask mandate for our schools,” Jeremy Dumkreiger, a Sioux City educator, wrote in an op-ed published in the Iowa Starting Line.

The U.S. had over 4 million confirmed coronavirus cases and more than 143,000 deaths as of July 23, according to a tally by Johns Hopkins University of Medicine.

FOX News and FOX 4 Dallas, contributed to this story.