LOS ANGELES - Data from the U.S. Centers for Disease Control and Prevention is finding that women make up a majority of those reporting negative side effects to the COVID-19 vaccines.

The CDC published a report last month consisting of data from the first 13.8 million vaccine doses administered to Americans between Dec. 14, 2020 and Jan. 13, 2021. Of those doses, 61% went to women. Of the 6,994 people who reported experiencing side effects from the vaccines, 79% were women.

Headache, fatigue and dizziness were the most frequently reported symptoms after vaccination, according to the CDC study.

In a separate CDC report published on Jan. 15, researchers said that "most reported anaphylaxis cases after receipt of Pfizer-BioNTech COVID-19 vaccine occurred in women." Anaphylaxis is a life-threatening allergic reaction that can occur after vaccination.

In January, the CDC published a report saying that out of more than 4 million of the first administered doses of the Moderna COVID-19 vaccine, only 10 cases of anaphylaxis — a rare, life-threatening allergic reaction — have occurred.

No anaphylaxis-related deaths have been reported in anyone who has taken the COVID-19 vaccine, according to the CDC.

The CDC says anyone who has experienced anaphylaxis after getting the first dose of a COVID-19 vaccine should not get a second shot of that vaccine.

Shelly Kendeffy, a medical technician at a State College in Pennsylvania, told the New York Times that she, along with six of her seven female colleagues who received the Moderna coronavirus vaccine, experienced an array of unwanted symptoms including body aches, chills, and fatigue.

She told the Times she initially felt fine immediately after receiving the shot but later that afternoon she said "my teeth were chattering, but I was sweating — like soaked but frozen." She added that of her eight male colleagues, only one experienced soreness while another got a headache and two felt fatigued. She said four felt no symptoms. 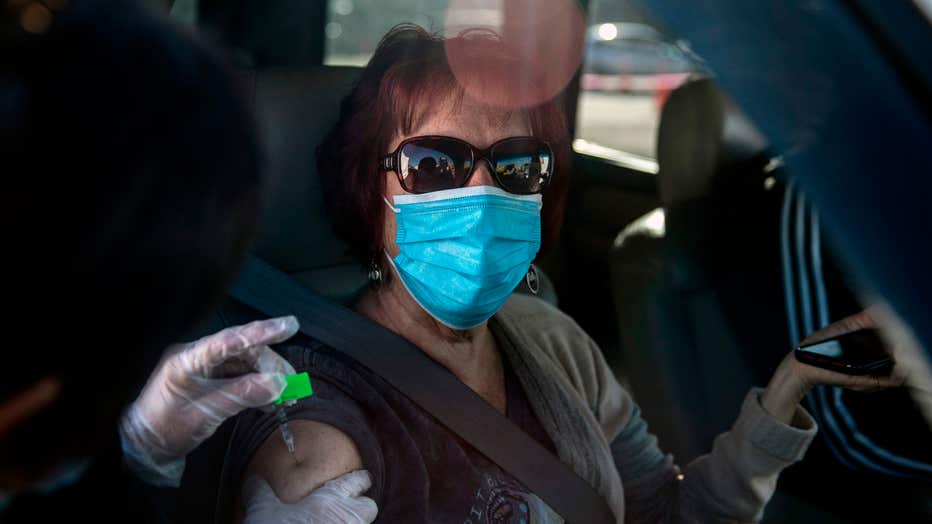 A woman gets her first dose of the Covid-19 vaccine administered during mass vaccinations at Coors Field baseball stadium on Jan. 30, 2021, in Denver, Colorado.

Some people who have received a COVID-19 vaccine have reported a red, sometimes bumpy rash on their injection arm. Dermatologists are referring to the rash as "COVID arm," but the CDC says it’s no cause for alarm.

"If you experience "COVID arm" after getting the first shot, you should still get the second shot at the recommended interval if the vaccine you got needs a second shot," the CDC said.

RELATED: Coronavirus vaccines: Some side effects are common and expected, experts say

While some side effects from taking the vaccine can be concerning, medical experts say most are common and expected.

Pfizer and Moderna have the leading vaccines in terms of efficacy in the United States, both boasting data that shows their formulations are more than 90% effective in preventing COVID-19.

It’s a path out of the pandemic that has claimed more than 1 million lives across the globe. But as is the case with all drugs, recipients have to be mindful of potential side effects.

According to History of Vaccines, an educational resource provided by the College of Physicians of Philadelphia, most side effects from vaccinations are mild.

According to the CDC, the most common side effects after getting a coronavirus vaccine include:

Pain, redness and swelling can also occur in the area of the skin that the shot was administered, the health agency says.

How do we know the vaccines are safe?

Scientists look for safety issues during the testing phase and continue their monitoring as shots roll out around the world. So far, the only serious warning to emerge is a rare risk of severe allergic reactions.

Different types of COVID-19 vaccines have been authorized and it’s possible side effects will differ for each — although there’s more public data on the vaccines being rolled out in Western countries than elsewhere. Countries also vary in their vaccine standards, with some allowing the use of shots before final-stage testing involving large numbers of volunteers.

But in the U.S., Britain and European Union, regulators required any vaccine to be tested in tens of thousands of people before distribution. So far, the U.S. is using shots from Pfizer and Moderna, while Britain and Europe have cleared those plus the AstraZeneca vaccine.

Those companies’ large studies found that common side effects were minor and typical of the immune system revving up: soreness in the arm, fever and flu-like symptoms including fatigue, chills and headache.

But since extremely rare problems might not turn up even in large tests, the vaccines still are being monitored. The U.S. and British governments and the European Medicines Agency track reports filed by health workers and the public about suspected side effects. Extra scrutiny in the U.S. includes tracking insurance claims for red flags. And U.S. vaccine recipients can sign up for a program that sends text messages to see if they’re feeling side effects.

Officials expected to receive reports of health problems, even deaths, that occur just by chance in the days or weeks after vaccination, given the huge numbers of people, including the frail elderly, getting inoculated.

With approximately 28 million people who have been fully vaccinated in the U.S. by early March, the CDC says it hasn’t detected any patterns in deaths that signal a safety problem.

Jordan Smith and the Associated Press contributed to this story.