Black Americans are more likely to know someone who has been diagnosed with COVID-19 according to a survey.

A recent study released by the U.S. Centers for Disease Control and Prevention revealed that a more "efficient and equitable administration" of COVID-19 vaccines needs to be a high priority after preliminary data showed mostly non-Hispanic White women received the COVID-19 vaccine so far.

During the first month of vaccine rollouts, approximately 12,928,749 received their first dose, according to the CDC.

"Among persons who received the first vaccine dose and had available data for the respective demographic characteristic variable, 63.0% were women, 55.0% were aged ≥50 years, and 60.4% were White, which likely reflects the demographic characteristics of the persons (health care personnel and LTCF residents) recommended to be vaccinated in the Phase 1a priority group," according to the study.

This disproportionate number may not be extremely out of the ordinary, however, according to data collected in 2019 by the American Community Survey which revealed "60% of health care workers were White, 16% were Black, 13% were Hispanic, and 7% were Asian."

It was also noted that women make up about 3/4 of the people who work in the health care industry, and according to a National Study of Long-Term Care Providers done between 2015-2016, "65% of nursing home residents were women, 75% were White, 14% were Black, and 5% were Hispanic," the CDC study stated.

Despite these disparities, researchers highlighted the glaring fact that people of color "have more severe outcomes from COVID-19 than persons who are White," and careful monitoring of vaccinations by race and/or ethnicity is crucial. 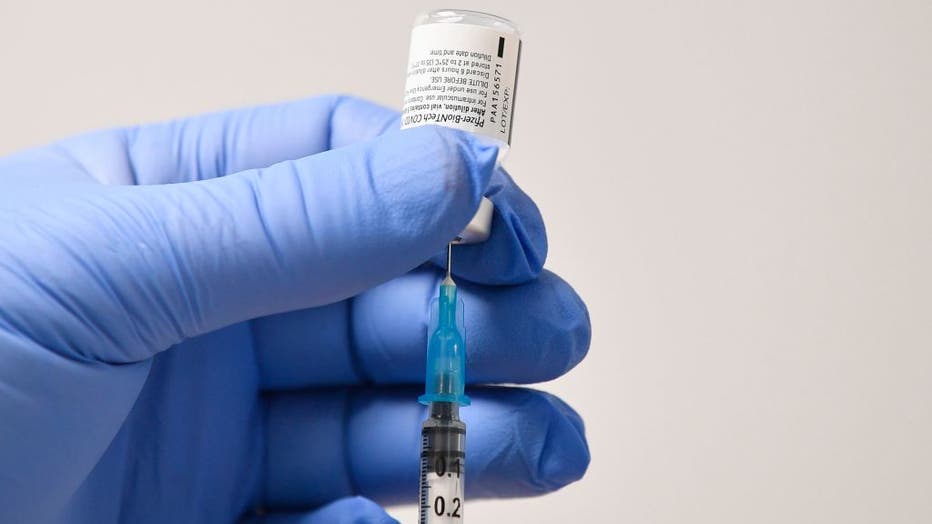 FILE - A member of staff uses a needle and a phial of Pfizer-BioNTech Covid-19 vaccine to prepare a dose at a vaccination health center in Cardiff, South Wales' on Dec. 8, 2020. (JUSTIN TALLIS/AFP via Getty Images)

The CDC study cited three main limitations: First, the race and/or ethnicity for approximately half of the total vaccinated population was not known. Second, a proportion of people who were early recipients of the vaccine did not report their race, and third, a high number of vaccine recipients were categorized as non-Hispanic, multiple or other races, according to the study.

But according to the CDC, the preliminary data that was recorded revealed the lack of proper race and/or ethnicity reporting when it comes to vaccinating people who are at higher risk for sickness.

"Jurisdictions should monitor the demographic characteristics of vaccinated persons to identify emerging disparities," the CDC stated. "Equitable and sustainable COVID-19 vaccine administration in all populations requires focus on groups with lower vaccine receipt who might face challenges with access or vaccine hesitancy."

Several studies have revealed that the novel coronavirus has disproportionately affected people of color in the U.S. In late January, the Biden administration reemphasized the importance of including "social vulnerability" in state vaccination plans — with race, ethnicity and the rural-urban divide at the forefront — and asked states to identify "pharmacy deserts" where getting shots into arms will be difficult.

Overall, 18 states included ways to measure equity in their original vaccine distribution plans last fall — and more have likely done so since the shots started arriving, said Harald Schmidt, a medical ethicist at the University of Pennsylvania who has studied vaccine fairness extensively.

RELATED: COVID-19 pandemic has an alarming impact on minority communities

"We’ve been telling a fairly simple story: ‘Vaccines are here.’ Now we have to tell a more complicated story," said Nancy Berlinger, who studies bioethics at The Hastings Center, a nonpartisan and independent research institute in Garrison, New York. "We have to think about all the different overlapping areas of risk, rather than just the group we belong to and our personal network."

Attempts to address inequities in vaccine access have already prompted backlashes in some places. Dallas authorities recently reversed a decision to prioritize the most vulnerable ZIP codes — primarily communities of color — after Texas threatened to reduce the city’s vaccine supply. That kind of pushback is likely to become more pronounced as states move deeper into the rollout and wrestle with difficult questions about need and short supply.

To avoid legal challenges, almost all states looking at race and ethnicity in their vaccine plans are turning to a tool called a "social vulnerability index" or a "disadvantage index." Such an index includes more than a dozen data points — everything from income to education level to health outcomes to car ownership — to target disadvantaged populations without specifically citing race or ethnicity.

Meanwhile, more than 32.2 million doses have been administered in the U.S., according to the CDC. That is up from 16.5 million on the day President Joe Biden took office on Jan. 20.

The number of shots dispensed in the week and a half since Biden's inauguration has been running at around 1.3 million per day on average, well over the president's oft-stated goal of 1 million per day. More than 5.9 million Americans have received the required two doses, the CDC said.

RELATED: Poll: One-third of African Americans say someone close to them has died of COVID-19

And as one of the deadliest months of the ongoing pandemic came to a close, hospitalizations and cases dropped significantly as vaccinations started to ramp up.

As the calendar flipped to February on Monday, the number of Americans in the hospital with COVID-19 fell below 100,000 for the first time in two months. New cases of infection are averaging about 148,000 day, falling from almost a quarter-million in mid-January. And cases are trending downward in all 50 states.

"While the recent decline in cases and hospital admissions are encouraging, they are counterbalanced by the stark reality that in January we recorded the highest number of COVID-19 deaths in any month since the pandemic began," said Dr. Rochelle Walensky, director of the CDC.