Commander in chief's best friend: A look back at presidential pets

For the first time in a very long time, the White House is presidential pet free.

WASHINGTON, D.C. - Bo and Sunny, the two Portuguese water dogs adopted by then-President Barack Obama to fulfill a campaign promise made to his daughters, were some of the most famous four-legged White House inhabitants of all time, but they certainly weren’t the first.

Man’s best friend has sat dutifully — and often adorably — beside the commander in chief at many points in American history, beginning with our very first president.

George Washington had many dogs of many different breeds, and the American Kennel Club even recognizes him as the father of the American Foxhound. He was known to give them rather amusing names, including Sweet Lips, Venus, Trulove, Taster, Tippler, Drunkard and Madame Moose. It’s rumored that Washington’s favorite dog was a greyhound named Cornwallis.

If you think partisan politics are getting out of hand today, just look at the way Franklin Delano Roosevelt had to defend his dog Fala during his presidency.

"These Republican leaders have not been content with attacks on me, or my wife, or on my sons. No, not content with that, they now include my little dog, Fala," FDR said to a crowd that responded with uproarious laughter.

Fala was the only presidential pet to ever be featured in a statue at a president’s memorial. 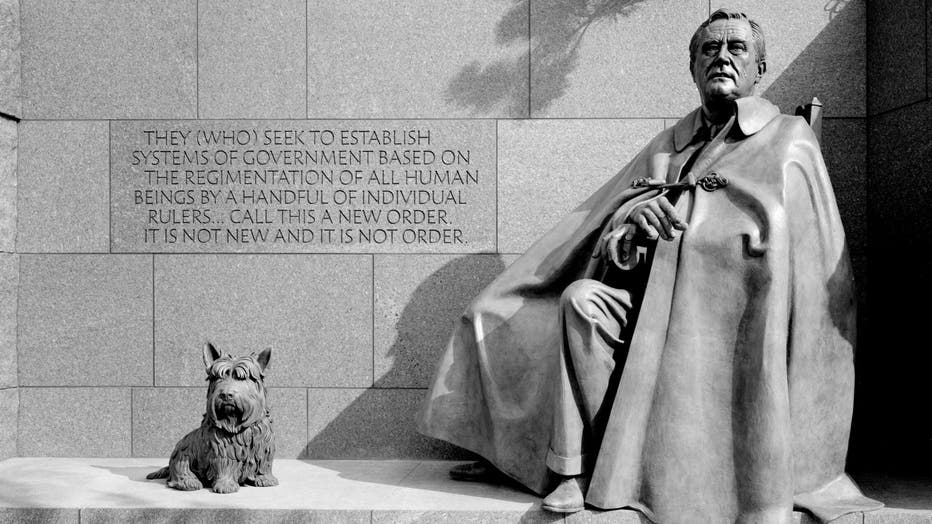 Fala was a Scottish terrier — a breed popular with presidential families.

Former President George W. Bush’s first dog was a Scottie named Barney, who gave annual tours of the White House’s holiday decorations via his “Barney Cam” videos. In 2005, Bush adopted another Scottie for his wife Laura, who named the 10-week-old puppy Miss Beazley. The Bushes also cared for a longhorn cow named Ofelia.

Richard Nixon, like FDR before him, also publicly defended his canine companion. After being accused of accepting illegal gifts, Nixon gave a speech defending his reputation and made clear that there was one gift he would absolutely not be giving back: his dog, Checkers.

“And you know, the kids, like all kids, love the dog and I just want to say this right now, that regardless of what they say about it, we're gonna keep it,” Nixon said.That speech has since been referred to as the “Checkers speech.”

The Kennedy children didn’t stop at just dogs, they turned the White House into a zoo. Also included in their herd of pets were ducklings, hamsters, a rabbit and even a Connemara pony named Leprechaun, given to them by the president of Ireland.

One horse wasn’t enough for Ronald Reagan, who kept several horses and two cats in addition to his many dogs.

The Clintons kept a cat named Socks during Bill’s presidency, and Socks was one of the world’s most famous cats well before felines had taken over just about every corner of the Internet. Socks lived in the White House for both terms and was even drawn by famous political cartoonist Pat Oliphant. Socks was not pleased when Buddy the dog moved into the White House, and the two had to be kept in separate living quarters.

For the first time in a very long time, the White House is presidential pet free.

Donald Trump is the first president since William McKinley (who served as president from 1897 to 1901) to inhabit the White House without any pets at all.