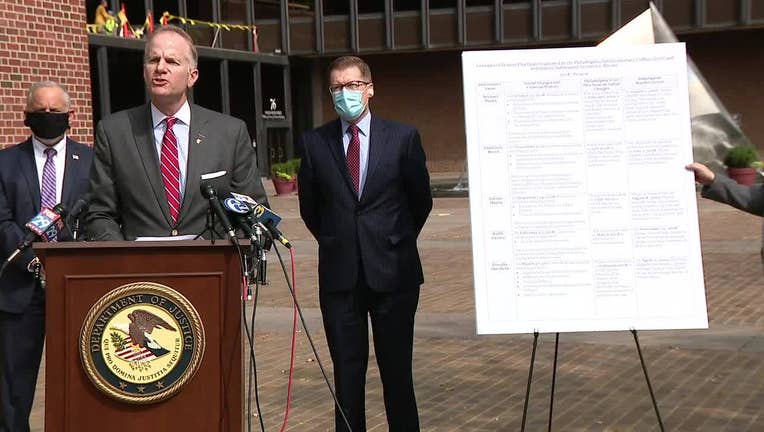 McSwain also went on to detail 10 murder cases in which he claims the defendant was on the street because of "overly lenient" plea deals given out by the DA's office.

In the first of two cases McSwain detailed during press conference Monday, 28-year-old Khalif Tuggle has been charged in a three-count indictment. Tuggle faces charges including carjacking, murder, and a weapons charge in the January 2017 murder of Thomas Petersen.

McSwain's office alleges Tuggle shot Petersen in the chest, dragged him out of the car, robbed him, and left him for dead in the road as he screamed in pain.

Tuggle then fled the scene in Peterson's car, and Peterson later succumbed to his injuries at Temple University Hospital.

In the second case, 53-year-old John Allen Kane is facing one count of possession of a firearm by a convicted felon in a case dating back to January 17, 2018. Kane allegedly possessed a firearm while on probation for committing his second homicide in the City of Philadelphia.

In the Tuggle case, the U.S. Attorney's office alleges District Attorney Larry Krasner's office agreed not to prosecute Tuggle for either first or second-degree murder in exchange for information on his alleged accomplice. According to McSwain, that information never came.

Under his current sentence, Tuggle would be eligible for parole in approximately 10 years. A conviction on the new federal charges brought Monday would bring the possibility of life in prison.

In the Kane case, McSwain says Philadelphia police arrested Kane after he was found to be in possession of a firearm during a traffic stop. He was arrested, as his prior felony convictions prohibit him from possessing a firearm.

Following his arrest, the U.S. Attorney " the District Attorney’s Office saw fit to voluntarily dismiss the charges against Kane on a technicality and he walked free."

He has since been taken into federal custody on the new charge.

"The federal cases against defendants Tuggle and Kane are the latest efforts by my Office to serve as a counterweight to the chaos in Philadelphia created by local criminal justice policies that coddle violent criminals,” said U.S. Attorney McSwain. “These policies create a culture of lawlessness; they leave criminals emboldened; and they have inevitable consequences – one of which is a murder rate in Philadelphia that is the highest it has been in nearly 15 years."

Later in the press conference, McSwain detailed 10 more cases he cited as examples of "shockingly lenient plea deals" from the District Attorney's Office where a defendant was later arrested for murder.

Among those 10 additional cases outlined, was Michael Banks, one of three men facing charges in the shooting death of a seven-year-old boy in West Philadelphia.
In Oct. 2018, Banks was arrested and charged with multiple weapons offenses, including a felony. He had prior convictions at the time of his arrest, but was given a plea deal in which the felony charge was dismissed. Banks received a 3-9 month jail sentence for a misdemeanor gun charge.

Jerome Martin was arrested and charged with possession of a firearm by a felon in Sept. 2018. He had previously been convicted of dealing and possessing drug paraphernalia. A June 2019 plea deal left Martin on house arrest.

Two months later, Martin and another man allegedly broke into a home and murdered a 23-year-old man.

Keith Garner is one of four suspects police say executed four others in the basement of a West Philadelphia home in November of 2018. Garner was arrested and charged with simple assault in February 2018. A plea deal in that case saw him sentenced to probation, despite felony convictions.

Byron Taylor was arrested in March 2018 and charged with a felony weapons offense. Taylor also had prior convictions and received probation following a plea in May of 2019 after the felony gun charge was dismissed.

"It would be inappropriate and irresponsible to comment on any case being prosecuted by another office for which we do not have all of the facts. For instance, it is a fact that Kalif Tuggle is serving a sentence that was determined by a judge after pleading guilty to murder and related felonies. It is also a fact that the District Attorney’s Office recommended that Tuggle be sentenced to serve 25 to 50 years of incarceration for his horrific crime."

The statement added, "Mass incarceration and death by incarceration have not made us safer. Throwing lives away in the name of politics has broken families and communities, further entrenching generational poverty to the point where quality of life indicators for Black people are now worse than prior generations. This Trump appointee is doing his boss’s bidding by telling fact-free tales about crime and public safety; thankfully, Americans know better than to believe them.