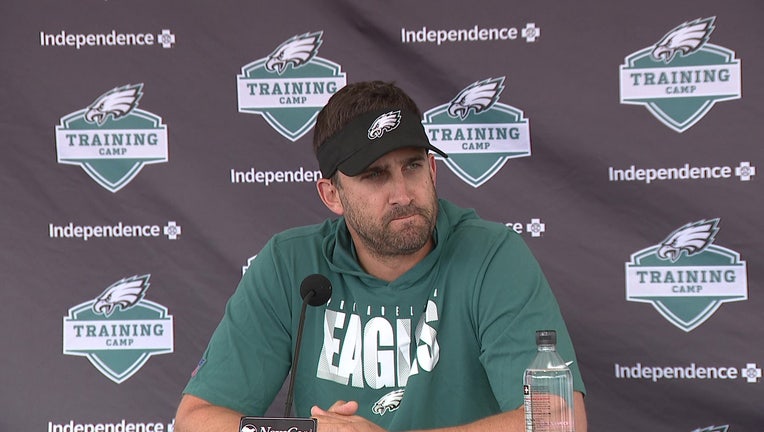 PHILADELPHIA - Coaching football is the genes for the Sirianni family.

Nick Sirianni spent three hours listening to his brother coach Washington and Jefferson College to victory over John Carroll in a Division III college football game Saturday. On Sunday, the entire family will tune in to watch Nick coach his first regular-season game in the NFL when the Philadelphia Eagles visit the Atlanta Falcons.

"I come from a coaching family and it definitely is special to me that I’m going to be coaching my first game as a head coach this Sunday and I know that it’s special for my entire family," Sirianni said Monday. "So I’m really excited about that, excited for my parents to watch on TV. I’m excited for my brothers to watch it on TV. One of my brothers will be getting ready for his next week’s game in the office as he watches it or he updates on his phone or whatever it’s going to be. But yeah, I’m excited just because it’s a family affair. Football has always been such a family affair for us."

Fran Sirianni is a legendary football coach in New York and a member of the Chautauqua (County) Hall of Fame for his successful career as a head coach at Southwestern High School.

His three sons, Mike, Jay and Nick, each coach football at various levels. Mike, the oldest of the brothers, enters his 19th season as the head coach at Washington & Jefferson College. Jay coached Southwestern to consecutive state championships in 2008 and 2009. Forty-year-old Nick is the youngest of the sons and the only one to coach in the NFL.

Sirianni played wide receiver at Division III Mount Union and began his coaching career there as defensive backs coach. He moved on to coach wide receivers at Indiana University of Pennsylvania before landing a job with the Kansas City Chiefs as an offensive quality control coach in 2009.

After four seasons with the Chiefs and five with the Chargers in various roles, Sirianni spent three seasons as the offensive coordinator for the Indianapolis Colts before the Eagles tabbed him to replace Doug Pederson. Sirianni didn’t get an interview for any of the six other head coaching vacancies in the NFL, but impressed Eagles owner Jeffrey Lurie and general manager Howie Roseman.

Nick’s enthusiasm and energy were obvious from the moment he greeted Philadelphia fans and reporters in his introductory video conference in January. Of course, he was criticized in a fickle town filled with passion and plenty of opinions.

All Sirianni has to do is win and they’ll love him no matter what he says.

"Of course I’m excited and I’m really excited again for my family, excited to be in this role, but I just have to make sure I temper my emotions, because I always feel like as the leader of the football team people are looking at you," Sirianni said. "If I’m too up, they’re going to be too up. If I’m too down, they’re going to be down. I just want to keep this even keel, no matter what’s going through my mind. I know myself. I need that so I can stay calm, and I can call the game the way I need to and manage the game the way I need to."

Sirianni has no easy task in Philly. He inherited a team that finished 4-11-1 and traded its franchise quarterback after he had a disastrous season. There’s a mix of young, unproved players and talented veterans with a lot to prove.

But in the weak NFC East, the Eagles have a chance to be competitive.

"I really want to see us being a team that connects. When we’re in the end zone and we get an interception or a fumble recovery or turnover, I want to celebrate together, and then I want to compete," Sirianni said. "I want to see a team that’s fighting, and that’s part of toughness. And accountability and football IQ. I want to see a smart team out there in situational football and knowing what to do and not having mental errors and knowing their opponent and who they’re playing. Then the biggest one to me that I want people to see in our football team is fundamentals. This is something that I talked about from the beginning, that teams that play with good fundamentals, they win one-on-one matchups.

Every coach that I brought in here was brought in here because I believe that they could teach fundamentals and get guys better. So, all those five things particularly, even a little bit more emphasis there on that fundamentally sound thing."