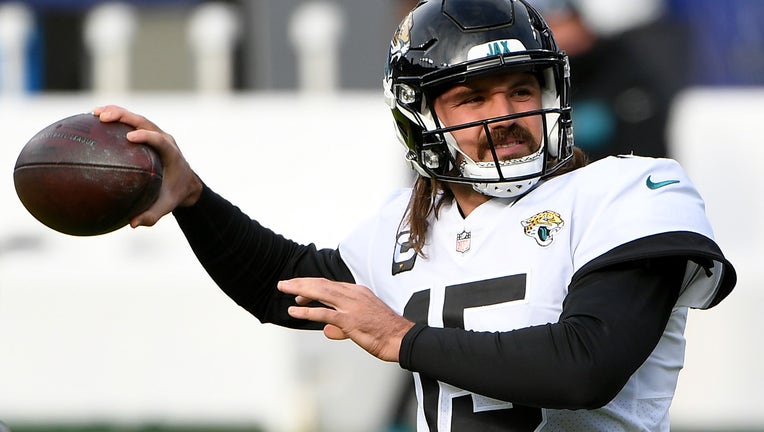 BALTIMORE, MARYLAND - DECEMBER 20: Quarterback Gardner Minshew II #15 of the Jacksonville Jaguars warms up prior to their game against the Baltimore Ravens at M&amp;T Bank Stadium on December 20, 2020 in Baltimore, Maryland. (Photo by Will Newton

PHILADELPHIA - Minshew Mania is on the move.

The Jacksonville Jaguars traded popular backup quarterback Gardner Minshew to Philadelphia on Saturday for a conditional draft pick in 2022. The Jaguars received a sixth-round pick that would become a fifth-rounder if Minshew plays 50% of snaps in three games.

The trade allows Jacksonville to move to C.J. Beathard as Trevor Lawrence's backup and gives Minshew a fresh start in an offense tailored for Jalen Hurts. The Eagles also have 36-year-old Joe Flacco in their now-revamped QB room. They released Nick Mullens to make room for Minshew.

The Jaguars first put Minshew on the trading block during the NFL draft in April, but they didn't get any takers. Coach Urban Meyer ended up having Minshew split repetitions with Lawrence when training camp opened — an odd QB competition that no one believed was anything more than a coach sending a message to a young team.

Lawrence was finally made the starter Wednesday, and Meyer said Minshew would compete for the backup spot with Beathard.

Minshew went 7-13 in 20 starts in Jacksonville after replacing injury-prone Nick Foles. He completed 63% of his passes for 5,530 yards, with 37 touchdowns and 11 interceptions.

He started 12 games in 2019, putting up better overall numbers than fellow rookies Kyler Murray and Daniel Jones and creating a "Minshew Mania" buzz around the city and parts of the country.

His quirky fashion sense, which includes jean shorts, Hawaiian shirts, a thick headband, a throwback leisure suit and ever-evolving facial hair, made him a fan favorite shortly after the Jags drafted him in the sixth round in 2019. His laid-back personality and quick wit made him even more beloved in small-market Jacksonville, which has spent decades longing to find a franchise quarterback.

Minshew was good enough as a rookie that then-Jaguars coach Doug Marrone and general manager Dave Caldwell, who is now a personnel executive for Philly, gave him a chance to prove he could be Jacksonville’s long-term guy.

The Jaguars essentially made their decision then, turning to rookie Jake Luton and then journeyman Mike Glennon. Minshew regained the starting spot briefly late in the year, but he was sacked five times at Baltimore and missed several open receivers deep. He also took a safety, lost a fumble and had an interception that was returned for a touchdown negated by a roughing-the-passer penalty.

The bottom line: Minshew has shown more flaws than flashes since opposing defenses figured him out. He’s a 6-foot-1 quarterback with an average arm and mediocre mobility. And no one really expected him to get the nod over Lawrence, widely considered the best QB prospect since Andrew Luck.

Now, the guy nicknamed the "Mississippi Mustache" — he grew up in Mississippi and made college stops at Troy, Northwest Mississippi Community College, East Carolina and finally Washington State — is looking for a little more love elsewhere.

His new teammates should prepare themselves for his arrival. Minshew prefers to do pregame stretches while wearing only a jock strap. He also once took a hammer to his right hand at East Carolina in a misguided attempt to extend his college career.

He also filmed a skit for ESPN's pregame show that featured Uncle Rico from the 2004 offbeat comedy "Napoleon Dynamite." Rico Dynamite is an overly nostalgic former athlete trying to get over his failed dreams of NFL stardom.

It was all part of Minshew Mania, which might add to Philadelphia's football lore some day.