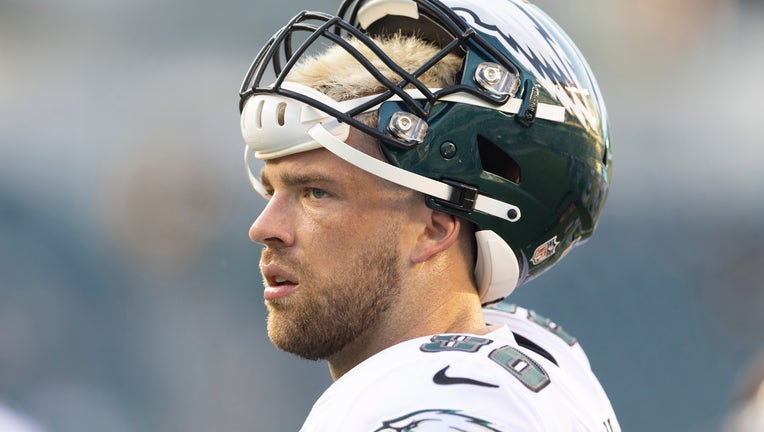 PHILADELPHIA, PA - AUGUST 12: Zach Ertz #86 of the Philadelphia Eagles looks on prior to the preseason game against the Pittsburgh Steelers at Lincoln Financial Field on August 12, 2021 in Philadelphia, Pennsylvania. (Photo by Mitchell Leff/Getty Ima

PHILADELPHIA - Zach Ertz still wants to finish his career with the Philadelphia Eagles.

The three-time Pro Bowl tight end said Wednesday that after more than a year of acrimony with the front office, he was "here to just kind of put it in the past."

Ertz’s return to Philadelphia seemed unlikely at the end of the 2020 season. He hadn’t spoken to reporters since an emotional news conference in January. The Eagles sought to trade Ertz, but teams wouldn’t meet their asking price. Ertz is coming off a poor, injury-riddled season just two years after he set the NFL’s single-season record for receptions by a tight end with 116.

Former Eagles wide receiver Freddie Mitchell joined FOX 29's Alex Holley and Mike Jerrick to talk about his first-hand experience with Tropical Storm Ida after he was rescued when his house flooded in Montgomery County and how he ventured to Walmart in his underwear.

With 561 receptions in a career that began as a second-round draft choice in 2013, Ertz needs 29 catches to pass the franchise’s all-time leader, Hall of Fame wideout Harold Carmichael.

"This isn’t a guy in the twilight of his career," Eagles general manager Howie Roseman said of the 30-year-old Ertz earlier this year.

Ertz looked like his old self in training camp except for platinum blonde hair. He is entering the final year of his contract and it doesn’t seem like the Eagles would fit him and Dallas Goedert under the salary cap in 2022.

"At the end of the day, it’s a moot point," Ertz said, when asked if he felt he’d been dealt with honestly this offseason. "They were standing firm to what they believed was fair. I can’t fault them for that."

Though Ertz clearly still thought he was headed elsewhere when he did not participate in the team’s optional spring work, he said his perspective began to change during an offseason devoted to rehabbing his ankle, as his wife, Team USA soccer star Julie Ertz, rehabbed a knee injury in preparation for the Tokyo Olympics.

Ertz said they called it "couples therapy," as they worked to get healthy while staying with former Eagles linebacker Jordan Hicks in Arizona.

"Just to be able to lean on one another during that time, and really build each other up during that time … it was a really rewarding time" for a couple whose relationship often is long-distance, he said.

Ertz maybe could have forced his way out by publicly criticizing Roseman, Philly fans, or teammates, but that isn’t who he is.

"This team is going to be a lot bigger than ’86′ going forward," he said. "I love this city too much for me to quote-unquote ‘burn it down’ like some people wanted me to do at times ... ultimately, I love this place."