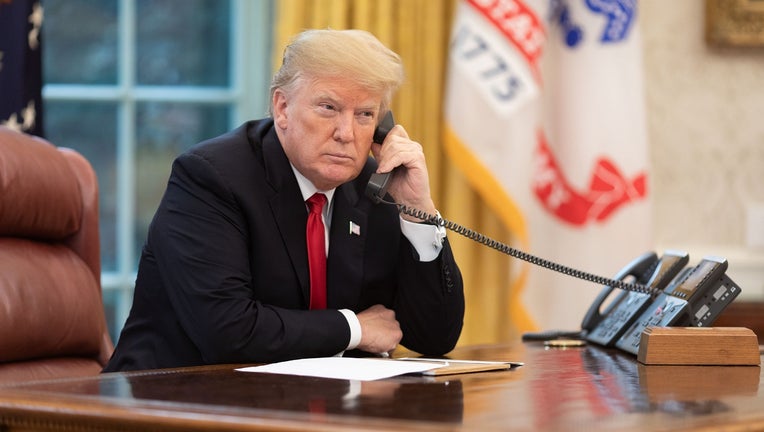 WASHINGTON - President Donald Trump released the rough transcript Friday of a congratulatory phone call he had with the incoming president of Ukraine, holding it out as evidence he did nothing wrong. Instead, the memorandum shows how White House descriptions of Trump’s communications with foreign leaders at times better reflect wishful thinking than the reality of the interactions.

As the House opened its second day of public impeachment hearings on Capitol Hill, Trump released the unclassified record of his April 21 call with then President-elect Volodymyr Zelenskiy. The document bears little resemblance to the paragraph-long official summary of the conversation that the White House released the same day as the 16-minute call.

The discrepancy highlights the gulf that often exists between the message that U.S. national security officials want to deliver to world leaders and the one that is actually delivered by Trump.

For years, U.S. officials have stressed the importance of trying to support democratic norms and root out corruption in Ukraine, which has been fighting a war of attrition against Russian-backed separatists since Russia invaded and later annexed Crimea in 2014.

To that end, the official readout of the Zelenskiy call reported that Trump noted the “peaceful and democratic manner of the electoral process” that had led to Zelenskiy’s victory in Ukraine’s presidential election.

But there is no record of that in the rough transcript released Friday. Instead, it said Trump praised a “fantastic” and “incredible” election.

Current and former administration officials said it was consistent with a pattern in which Trump veers from - or ignores entirely - prepared talking points for his discussions with foreign leaders, and instead digresses into domestic politics or other unrelated matters. In the Ukraine call, for example, Trump praised the quality of the country’s contestants in a beauty pageant he used to oversee and compared Zelenskiy’s election to his own in 2016.

"When I owned Miss Universe, they always had great people,” Trump told Zelenskiy of his country.

The original readout also said Trump “underscored the unwavering support of the United States for Ukraine’s sovereignty and territorial integrity.” But there’s no indication of that in the rough transcript.

Likewise, the readout said the president expressed his commitment to help Ukraine “to implement reforms that strengthen democracy, increase prosperity, and root out corruption.” The word “corruption” is not mentioned in the rough transcript of the actual call.

Corruption did feature prominently in Trump’s second call with Zelenskiy on July 25, the call that helped spark the impeachment drama.

It’s highly unusual for a president to release the rough transcripts of calls with foreign leaders, which are generated by voice transcription software and edited by officials listening in on the calls to ensure they are accurately memorialized. Official readouts, by contrast, are issued as news releases meant to further foreign policy aims. They are typically the only public accounts of the calls that presidents have with their counterparts.

Several current and former administration officials told The Associated Press that the readouts of Trump’s calls with foreign leaders are often pre-written, reflecting official U.S. policy and what National Security Council officials hope the leaders will discuss and the talking points they provide to guide the president’s conversations.

Those readouts are supposed to be revised after the calls to reflect what actually transpired. But that doesn't always happen, according to seven current and former administration officials who spoke on condition of anonymity to describe internal deliberations.

Such a revision didn’t happen in this case, according to a person familiar with the matter. The person said that, as usual, a draft readout of the call had been written in advance based on talking points and had been approved by then-National Security Adviser John Bolton. That draft included reference to Trump raising the issue of corruption, which the NSC had recommended, with specific talking points included in Trump’s briefing materials.

But the president did not raise the issue. And since the call occurred on a Sunday, the person said, the White House may not have updated the press release before it was publicly released.

Other officials noted that staffers tasked with writing readouts typically haven't listened in on the president's calls and instead rely on others to brief them. They are often under a time crunch driven by NSC staffers eager to have the U.S. readouts come out before the other nations releases their own accounts. Sometimes, they said, the administration simply doesn’t want to recount everything discussed. Other times, they have decided the best course of action is not to release a readout at all.

Asked why the rough transcript released Friday differs so much from the readout, White House spokesman Hogan Gidley said it is “standard operating procedure for the National Security Council to provide readouts of the president’s phone calls with foreign leaders.” This one, he said, “was prepared by the NSC’s Ukraine expert.”

The current Ukraine expert at the NSC is Lt. Col. Alexander Vindman, who testified to lawmakers last month behind closed doors and is scheduled to give public testimony Tuesday.

Gidley added, “The president continues to push for transparency in light of these baseless accusations and has taken the unprecedented steps to release the transcripts of both phone calls with President Zelenskiy so that every American can see he did nothing wrong.”

To write a readout that included things that weren’t discussed was “out of bounds,” said the official.

It was practice to leave some details out of readouts to protect sensitive matters discussed on the call. But never were details or facts added or made up during the Obama and George W. Bush administrations, said another official who worked on national security matters in both those White Houses.

Ned Price, a former NSC spokesman under Obama and now director of policy at National Security Action, said it wasn’t uncommon for readouts to provide a “more artful and formal recap” of a foreign leader call.

“But it's certainly not normal for the readout to be nearly entirely divorced from the reality of the call,” he said. “The discrepancies between the transcript and the readout in this case are profound.”

However, one of the former Trump White House officials familiar with the process said there is no “procedural step” in place to ensure the two are in agreement.

Another former Trump administration official familiar with the process said draft readouts of calls were written ahead of time, but since Trump does not adhere to talking points for meetings or calls, "it's a crap shoot on what is actually said."