WASHINGTON - The former U.S. ambassador to Ukraine who was recalled from her post appeared Friday in the second day of historic impeachment hearings to consider the removal of Donald Trump, detailing how she felt threatened after being ousted and responding to real-time attacks by America’s 45th president on Twitter.

Marie Yovanovitch shared how she learned Trump had denounced her in his July phone call with Ukrainian President Volodymyr Zelensky. In that call, Trump referred to her as “bad news” and said she was “going to go through some things.”

The ousted ambassador spoke to members of Congress for about five hours.

Yovanovitch recalled the moment she read the White House’s rough transcript of Trump’s conversation with Zelensky.

“A person who saw me actually reading the transcript said that the color drained from my face,” she testified. “I think I even had a physical reaction. I think, you know, even now, words kind of fail me.”

When asked what the words “going to go through some things” sounded like to her, Yovanovitch responded: “It sounded like a threat.”

Trump himself went after her again as she spoke during the public hearing, tweeting from the White House that everywhere she served had “turned bad.” He emphasized that as president he had the “absolute right” to appoint his own ambassadors.

Rep. Adam Schiff, the Democratic chairman of the the House Intelligence Committee, pointed out the president’s comments on Twitter to Yovanovitch during the hearing, asking what effect such attacks may have on other witnesses’ willingness to come forward.

"It's very intimidating," she responded.

But Trump later responded that he wasn't trying to intimidate any witnesses and is entitled to speak his mind as the investigation plays out.

"It's a political process, it's not a legal process," Trump said of impeachment. "I'm allowed to speak up."

Yovanovitch, who served as ambassador to Ukraine from 2016 until May of this year, was seen as a tough ambassador at a time when the U.S. was trying to root out corruption in the young democracy. 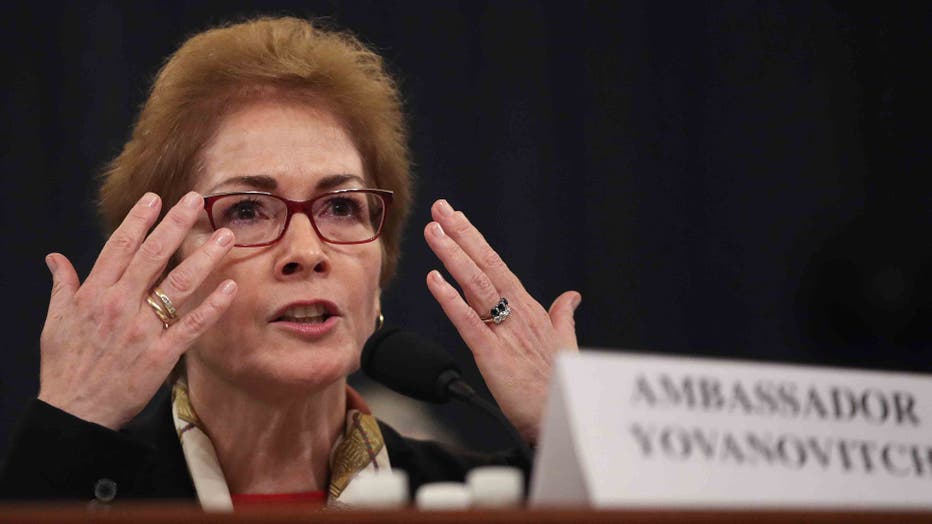 Yovanovitch told the House Intelligence Committee of a concerted “smear” campaign against her by Trump’s personal lawyer, Rudy Giuliani, and others, including the president’s son, Donald Trump Jr., before her firing.

Her removal is one of several events at the center of the impeachment effort.

“These events should concern everyone in this room,” Yovanovitch testified in opening remarks. “Shady interests the world over have learned how little it takes to remove an American ambassador who does not give them what they want.”

RELATED: Impeachment inquiry: Here’s what it means and what happens next

The daughter of immigrants who fled the former Soviet Union and Nazi German, she described a 33-year career, including three tours as an ambassador to some of the world’s tougher postings, before arriving in Ukraine in 2016.

She denied the accusations against her, including that she favored Democrat Hillary Clinton over Trump in the 2016 election and that she circulated a “Do Not Prosecute” list to former top prosecutor in Ukraine, Sergiy Lutsenko, which she called a “fabrication.” 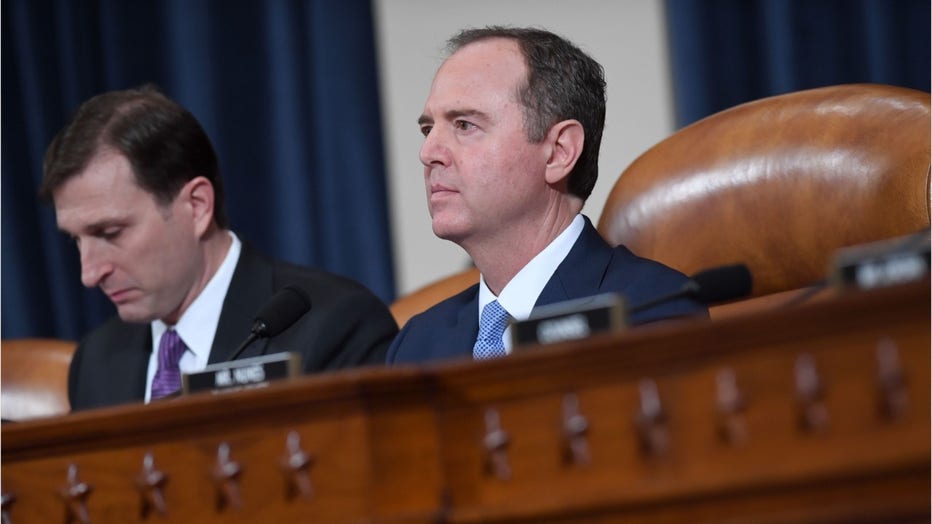 Schiff opened the day’s hearing saying she was “too tough on corruption for some, and her principled stance made her enemies.”

The top Republican on the panel, Rep. Devin Nunes of California, lamented the hearings, calling it a “day-long TV spectacle.”

Nunes complained that Democrats are relying on hearsay testimony from witnesses who only know of Trump’s actions second-hand. He also pressed to hear from the still anonymous government whistleblower who first alerted officials about Trump’s phone call with Ukraine that is in question.

“These hearings should not be occurring at all,” he said.

Just as the hearing was opening, the White House released its rough transcript of an earlier call Trump had with Zelensky that was largely congratulatory.

Nunes read that transcript aloud. In it, Trump mentioned his experience with the Miss Universe pageant in Ukraine and invited Zelensky to the White House. He closed with, “See you very soon.”

RELATED: Trump: Impeachment probe has been 'very hard' on family

Known as “Masha,” Yovanovitch previously testified on Oct. 11 during her closed-door deposition that she was told that people were "looking to hurt" her. One senior Ukraine official said she needed to "watch my back.“

Yovanovitch and others have described Giuliani as leading what one called an “irregular channel” outside the diplomatic mainstream of U.S.-Ukraine relations. When asked during her deposition if anyone at the State Department who was alerted to Giuliani’s role tried to stop him, she testified, “I don’t think they felt they could.”

She also sounded an alarm about the denigration of American diplomacy and the hollowing out of the State Department under Trump.

“I remain disappointed that the department’s leadership and others have declined to acknowledge that the attacks against me and others are dangerously wrong,” Yovanovitch told Congress. “This is about far more than me or a couple of individuals. As Foreign Service professionals are being denigrated and undermined, the institution is also being degraded.” 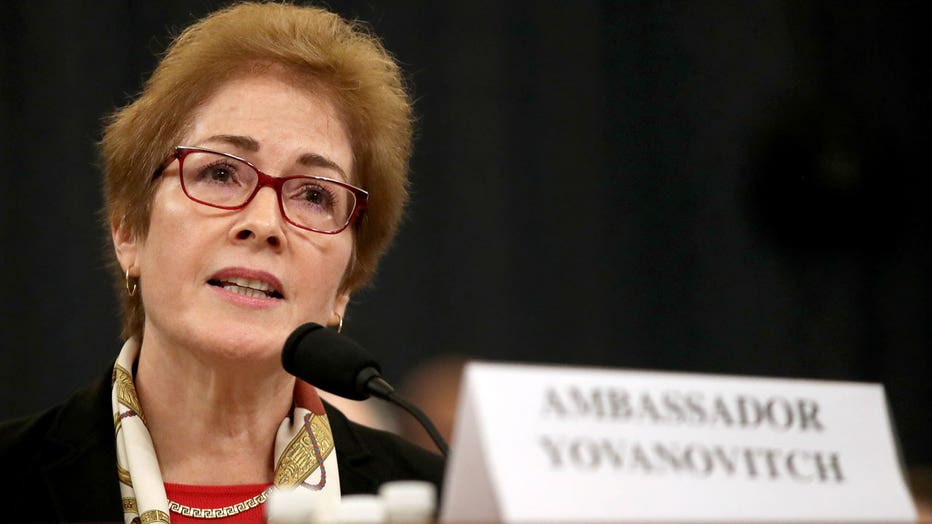 Her testimony, which also included a defense of the role of American diplomats, put a public face on deep dissatisfaction in the department under Trump. His administration has slashed the department’s budget, left many important posts open for extended periods and often disdained the work of the foreign service.

The impeachment inquiry is centered on Trump’s July 25 phone call with Zelensky. In the phone conversation, Trump asked for a “favor,” according to an account provided by the White House. He wanted an investigation of Democrats and 2020 rival Joe Biden.

Later it was revealed that the administration was also withholding military aid from Ukraine.

During Wednesday’s hearing, William Taylor, the highest-ranking U.S. official in Ukraine who replaced Yovanovitch, testified that another State Department witness overheard Trump asking about “the investigations” the day after his phone call with Zelensky.

During a closed-door session later on Friday, the panel will hear from that State Department witness, a political adviser in Kyiv named David Holmes. Holmes was at dinner with Gordon Sondland, when the Ambassador to the European Union called up Trump. The conversation was apparently loud enough to be heard.

The president denied the revelations, telling reporters at the White House: “First I’ve heard of it.”

The Associated Press has reported that a second US Embassy official also overheard Trump’s conversation.

House Speaker Nancy Pelosi says Trump’s actions toward Ukraine amount to “bribery.” Trump has repeatedly referred to the proceedings as a “hoax” and a “sham” and says he did nothing wrong.

“The bribe is to grant or withhold military assistance in return for a public statement of a fake investigation into the elections,” Pelosi said. “That’s bribery.”

It’s also spelled out in the Constitution as one of the possible grounds for impeachment — “treason, bribery or other and high crimes and misdemeanors.” But there's no consensus yet that Trump's actions at the heart of the inquiry meet that threshold.

The House Intelligence Committee will hear from eight more impeachment witnesses next week.