Couple creates the Ferrari LaFerrari supercar out of snow

Footage captured by Donata Bugiene shows her husband building the Ferrari out of snow over a two-day period before he applies the final touches. Credit - Donata Bugiene via Storyful

A husband and wife in Lithuania sculpted their own life-size replica of a Ferrari out of snow, complete with red paint and other little touches seen on the Italian supercar.

Video captured by Donata Bugiene on Jan. 31 shows her husband in Panevezys County, Lithuania, building the Ferrari out of snow over a two-day period. He also applies the smaller details seen on the car using a spatula and "environmentally friendly paint."

"The Ferrari is a real size, made to the dimensions of the original Ferrari LaFerrari," Bugiene told Storyful.

The real LaFerrari supercar, which costs more than $1 million, debuted in 2013 at the Geneva Motor Show. Painted in the company’s signature red, the Ferrari LaFerrari features a Formula One-derived hybrid-kinetic energy recovery system (HY-KERS) to deliver a total power output of 950bhp, according to FOX News. 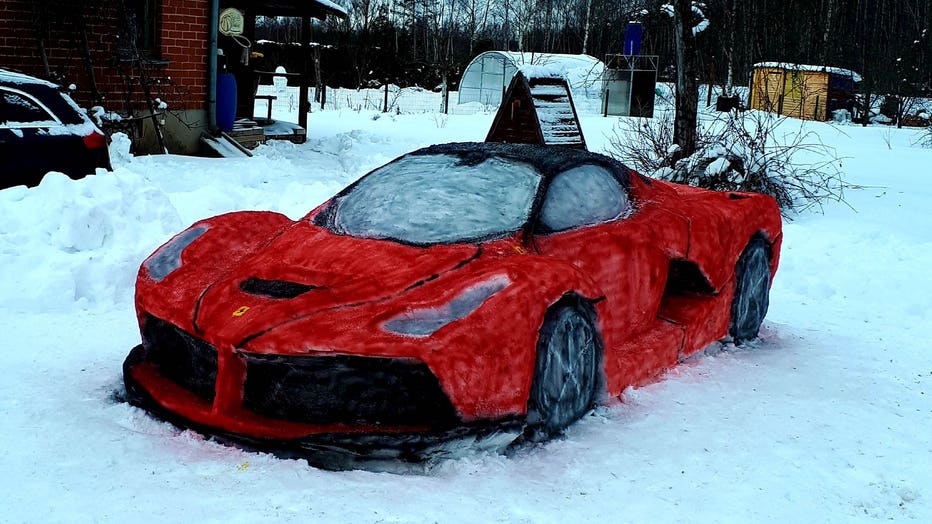 Ferrari said at the time that the LaFerrari accelerates to 186 mph in 15 seconds and hit a top speed of over 217 mph.

Only 499 units were built, and they all sold out before the car was even available, according to Auto Express Magazine

"We decided that if you can’t buy it – you can build it yourself," Bugiene said.

"Now no one can deny that a Ferrari is standing in our yard," she added.