The House is set to consider a measure this week that calls for Taylor Greene, a controversial first-term lawmaker known for her support of the QAnon conspiracy theory, from her assignment on the Education and Labor Committee. 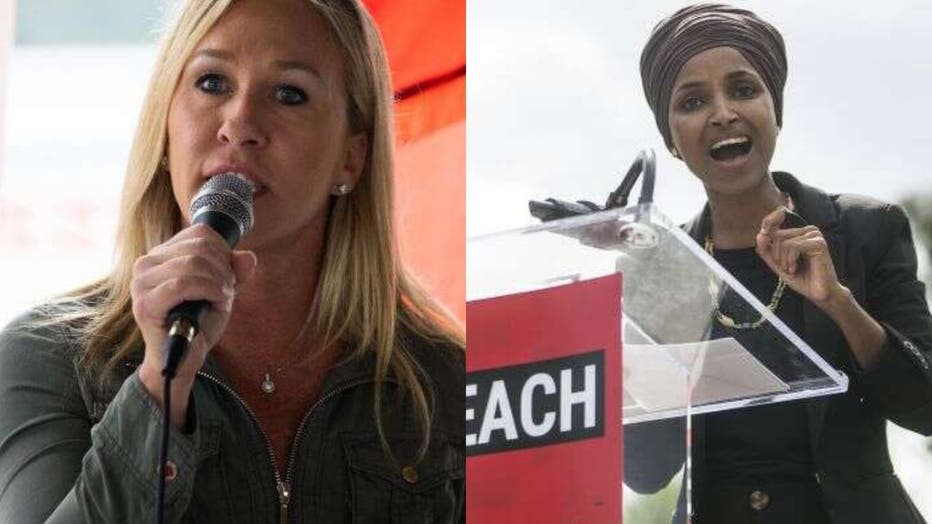 House Republicans, under bipartisan pressure to punish Greene, have been hoping to take action on their own — such as removing her from one committee — and avoid a difficult political vote for many in the GOP.

No. 2 House Democrat Steny Hoyer of Maryland released a statement saying that after speaking to House Minority Leader Kevin McCarthy, R-Calif., "it is clear there is no alternative to holding a floor vote on the resolution to remove Rep. Greene from her committee assignments. "

A McCarthy aide said he would discuss the situation with his GOP colleagues. 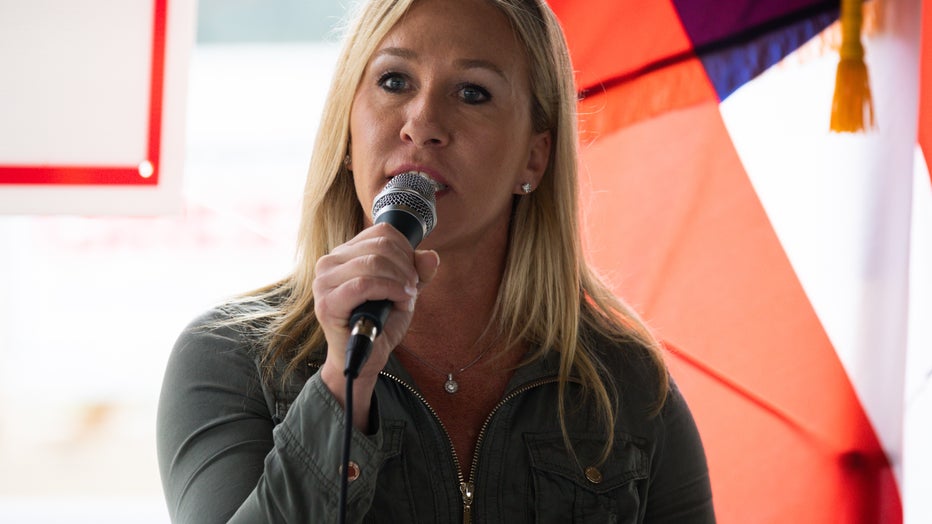 A full House vote would be a political ordeal for many Republicans, forcing them to go on record defending or punishing a social media-savvy lawmaker who has won enthusiastic support from Trump.

Greene is also on the Budget Committee.

The Democratic-run House Rules Committee was meeting Wednesday in an initial step toward removing Greene from her committees, a rare step for Congress. 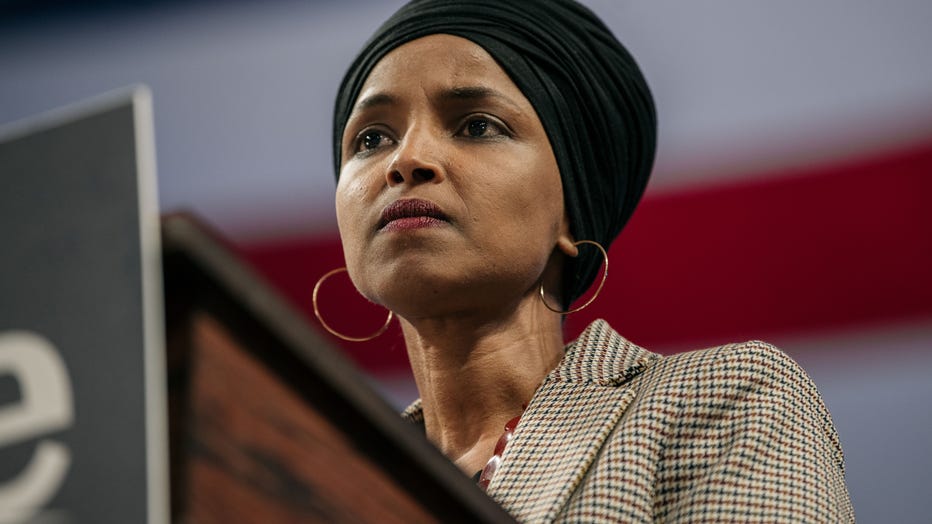 Similarly, a proposed GOP-backed amendment calls for Omar, frequently identified as a member of the "Squad" of progressive Democrats, to be removed from her committee assignments "in light of conduct she has exhibited," Fox News congressional correspondent Chad Pergram reported. In the amendment, Republicans argue that Omar has made anti-Semitic comments that are grounds for dismissal.

In Feb. 2019, Omar triggered an uproar after she wrote, "It’s all about the Benjamins baby" in response to a tweet referencing House Minority Leader Rep. Kevin McCarthy’s pledge to take "action" against her over her criticism of Israel. Later, Omar suggested that American Israel Public Affairs Committee, or AIPAC, was paying politicians to take a favorable stance toward Israel.

Omar’s remarks drew bipartisan criticism in Congress. She later apologized and thanked colleagues for "educating [her] on the painful history of anti-Semitic tropes."

It is unusual for party leaders to strip lawmakers of committee assignments, which can help them address their districts' needs and raise campaign contributions.

In 2019, House GOP leaders removed Rep. Steve King, R-Iowa, who had a history of racist comments, from the Agriculture and Judiciary panels after making comments to a newspaper about white supremacy. He lost the Republican primary for his seat in 2020 and is out of Congress.

McCarthy met for 90 minutes late Tuesday with Greene, R-Ga., and aides said little about the outcome. The hard-right freshman has burst onto the national political scene after using social media to endorse outlandish conspiracy theories and violent, racist views.

"The best thing that could happen at this moment is for Kevin McCarthy to make clear that she should not be" on the education committee, Rep. Hakeem Jeffries, D-N.Y., a member of his party's leadership, told reporters. Jeffries said if McCarthy doesn't act, "We’ll be prepared to move forward."

Greene was showing little sign of backing down. "No matter what @GOPLeader does it would never be enough for the hate America Democrats," she tweeted early Wednesday.

Meanwhile, House Republicans planned a closed-door meeting later Wednesday in which Cheney’s political fate could be decided. The GOP’s farthest right-wing was itching to oust Cheney, of Wyoming, from her post as the No. 3 House Republican after she voted last month to impeach Trump.

Cheney is a leader of her party’s traditional conservatives and is a daughter of former Vice President Dick Cheney.

The strife underscores Republican fissures as the party seeks a path forward two weeks after Trump left office as the only twice-impeached president. House Republicans are effectively deciding whether to prioritize the former president’s norm-shattering behavior and conspiracy theories and retain the loyalty of his voters over more established conservative values.

The handling of Greene and Cheney presented a tricky balancing act for McCarthy. The eight-term lawmaker is hoping to become speaker should Republicans capture the House majority in the 2022 elections and has little interest in antagonizing any GOP colleagues.

RELATED: Rep. Marjorie Taylor Greene responds to calls for her removal from office

Penalizing Cheney for what she called her "vote of conscience" on impeachment would be awkward without also punishing Greene. Action against either risked angering the GOP’s numerous Trump supporters or its more traditional conservative backers.

"You can’t do the normal political song and dance and appease this side slightly and appease that side slightly," said former Rep. Mark Sanford, R-S.C., who lost a 2018 party primary after clashing with Trump. "The whole nature of the Trump phenomenon is there is no appeasement."

McConnell issued one statement praising Cheney as "a leader with deep convictions and courage." In another statement that didn’t use Greene’s name, the usually circumspect McConnell called her "loony lies" a "cancer" on the GOP. His remarks were the latest indication of his concerns about letting the GOP’s most pro-Trump, hardest-right factions gain too much sway in the party.

McCarthy has stopped short of aggressively criticizing Greene, who was dubbed a "future Republican Star" by Trump last summer and has remained a firm Trump supporter.

McCarthy has long been close to Trump. But he’s been criticized by some Republicans, mostly quietly, for relentlessly supporting Trump’s fallacious claims of a fraudulent election in November and for not forcefully criticizing Trump for helping provoke the deadly Jan. 6 attack on the Capitol by his supporters.

Cheney foes have said they have enough votes to force her Cheney’s removal from her leadership job.

But it was unclear Wednesday whether that vote among GOP lawmakers would occur or if McCarthy would somehow delay that showdown. McCarthy has said he supports Cheney but also has "concerns," leaving his stance on her unclear.

Rep. Matt Rosendale, R-Mont., a leader of the effort to oust Cheney, says he has enough support to succeed.
"She’s brought this on herself," Rosendale said.