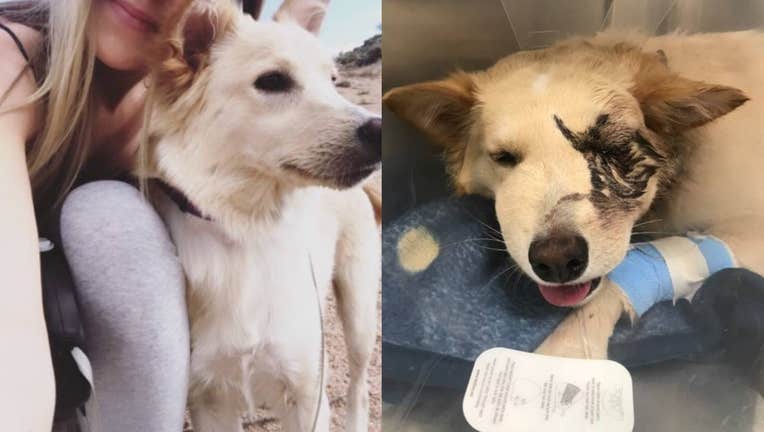 PHOENIX - A hike in the Superstition Mountains turned out to be a nightmare for one Valley woman when her dog was attacked by a rattlesnake.

Hiking has become a hobby for the the duo since Nellie joined Amanda Medell's family seven months ago.

On Thursday, Medell was hiking with Nellie and her roommate, Nicole Hardenbrook, at Wave Cave at the Superstition Mountains when Nellie stuck her face in a bush. The next thing they saw was a snake in the trail and Nellie bleeding and yelping.

"About a mile through the hike, Nellie decided to sniff a bush [and] all of a sudden, she started yelping and bleeding," Medell said. "Looking at her, seeing she's in pain — it's swelling, it's heartbreaking."

"[The snake was] at literally my ankles," Hardenbrook said. "[I'm] pretty sure it brushed my legs and it's like, flopped over on its stomach. It was like a black-out moment."

The women rushed Nellie to an emergency veterinarian in time to get her anti-venom, but her eye will have to be surgically removed when the swelling goes down.

Nellie is now recovering at home. But Medell says the two will keep hiking.

"I think I will go hiking with her just because she loves doing it," Medell said. "I know that she won't be scared to do it again. But I'm definitely [going to] be more cautious."

Nellie is slated to have surgery in about five days, which is expected to cost thousands of dollars. A GoFundMe has been set up to help cover Nellie's medical expenses.