The study found that consumption of sugary drinks was ”significantly associated” with the risk of overall cancer and breast cancer.

LOS ANGELES - Regularly drinking sugary beverages and fruit juices was linked to a greater risk of developing cancer in a new observational study.

The study, published Wednesday in the medical journal BMJ, found that consumption of sugary drinks was "significantly associated” with the risk of overall cancer and breast cancer.

The study authors from Sorbonne Paris Cité University aimed to assess any associations between drinking sugary drinks, artificially-sweetened beverages and the risk of cancer. The participant data was collected through the NutriNet-Santé nutrition survey in France.

Sugary drinks were defined as beverages that contained more than 5 percent sugar, which included 100 percent fruit juices with no added sugar, according to the study. This also meant soft drinks, milk-based sugar sweetened beverages, sport drinks and energy drinks. 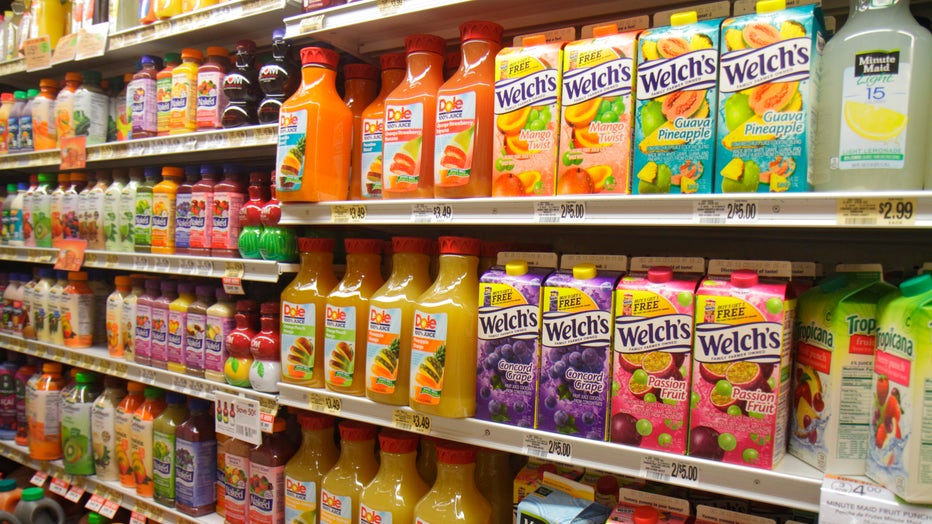 Shelves of fruit juices are shown in this file image at a grocery store. (Photo by: Jeffrey Greenberg/Universal Images Group via Getty Images)

Researchers followed 101,257 French adults for a nine-year period, keeping track of their consumption of sugary drinks and artificially-sweetened beverages. Participants had an average age of 42 — and 79 percent were women.

The participants filled out at least two 24-hour diet questionnaires to determine their daily consumption.

“When the group of sugary drinks was split into 100% fruit juices and other sugary drinks, the consumption of both beverage types was associated with a higher risk of overall cancer,” the study authors wrote.

The study found no link between artificially-sweetened beverages and cancer. The authors warned that this finding should be interpreted with caution due to the relatively low level of consumption among the participants in the study.

The authors pointed out that sugary drinks are “convincingly associated with the risk of obesity,” which in turn, is recognized as “a strong risk factor for many cancers.”

Additionally, the chemical compounds in sugary drinks, such as 4-methylimidazole in drinks containing caramel colorings, could play a role, as well as pesticides in fruit juices.

The authors noted that the findings did not show cause and effect and that further research was needed.

“These results need replication in other large scale prospective studies,” the study authors said. “They suggest that sugary drinks, which are widely consumed in Western countries, might represent a modifiable risk factor for cancer prevention.”

They did add that the findings support existing nutritional recommendations to limit sugary drink consumption, as well as policy actions such as taxation and marketing restrictions on sugary drinks.

The American Beverage Association stressed the importance of maintaining a balanced diet in response to the study.

“It’s important for people to know that all beverages – either with sugar or without are safe to consume as part of a balanced diet,” American Beverage Association spokeswoman Danielle Smotkin said. “Additionally, the authors of the study acknowledge there is no evidence of causation and should be reviewed with ‘cautious interpretation of the results.’”

“That said, America’s leading beverage companies are working together to support consumers’ efforts to reduce the sugar they consume from our beverages by providing more choices with less sugar or zero sugar, smaller package sizes and clear calorie information right up front,” Smotkin added.