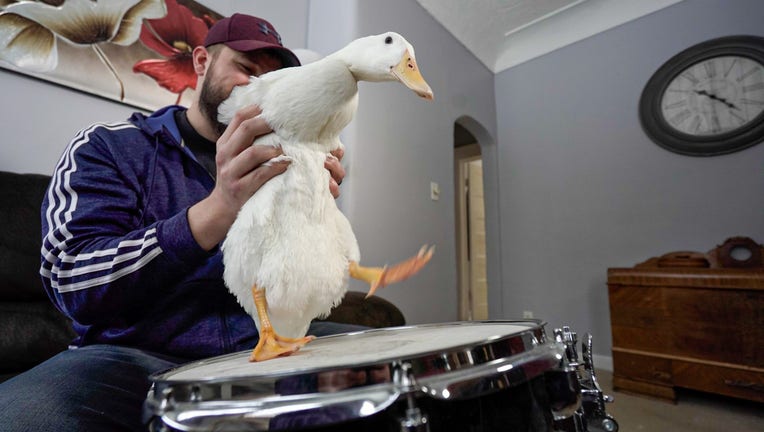 Derek Johnson and his duck, Ben Afquack, have gone viral on social media for the duck's drumming talents.

"Not yet. I don't think he knows. That's the funny part; he has no idea what's going on right now," said Derek Johnson, Ben's owner.

Drumming duck in St. Paul rocks to his own beat

Drumming duck Ben Afquack has people across the world rocking to his beat.

Johnson runs the Instagram account "Minnesotaduck" to document snapshots of Ben Afquack's life. Photos show the St. Paul duck hitting up hot spots across the Twin Cities metro, but a recent video really allowed the bird to spread his wings. A video of the bird tapdancing a steady beat on a snare drum went viral on social media, tallying more than 222,500 views and 32,500 likes.

"It's just different," said Johnson. "I think it just hits the funny bone because it's something that is naturally kind of funny, and also up until this point, I don't think I've found a drumming duck. Maybe we'll get him set up on a full kit one of these days and see if he can do some fills for us."

The video now has a life of its own, with others adding the fowl beats to other videos.

"Oh yea and then all of the remixes of it are even better. People are so creative," he said.

Johnson got Ben Afquack at a farm store in Anoka when the duck was just a day old.

"We really wanted to try to have a social duck and have him be more of a pet than like a farm animal," said Johnson. "So instead of having a goldfish with feathers, we wanted it to be kind of like a dog or something like that we could go on adventures with and have fun."

And now those adventures will have their very own soundtrack.

"He has a pretty good beat, though? Doesn't he?" said Johnson. "And like I said, I thought it was funny, but I wasn't expecting this sort of reaction out of it."