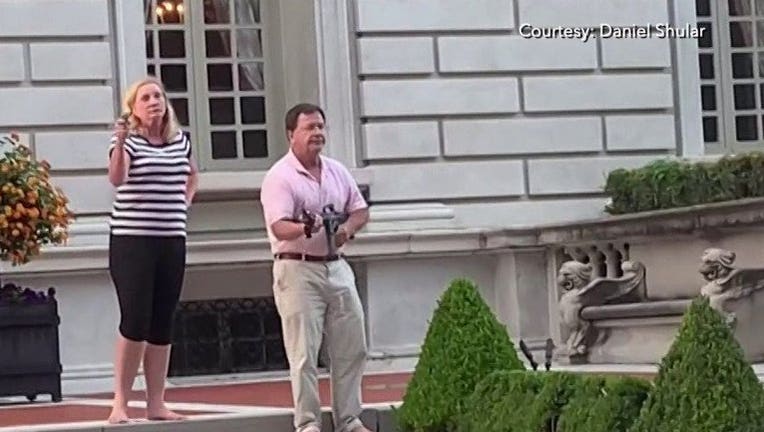 Mark and Patty McCloskey on Monday at the Republican National Convention reinforced the theme outlined in President Donald Trump’s campaign ads. The Republican is painting his opponent as complicit with rioting and violence that has taken place in some cities in recent months amid racial justice protests, the vast majority of which have been peaceful.

Patty McCloskey says, “They want to abolish the suburbs altogether by ending single-family home zoning." She says the actions “would bring crime, lawlessness and low-quality apartments into thriving suburban neighborhoods.”

She says, “These are the policies that are coming to a neighborhood near you,.” She adds, “Your family will not be safe in the radical Democrats’ America.”

Mark and Patricia McCloskey, lawyers in their 60s, both speak in the recorded message Monday night, their attorney, Al Watkins said. Mark McCloskey told “Fox & Friends” they will emphasize that safety and security are basic tenets of freedom — a theme that fits with the law-and-order focus of Republican President Donald Trump’s reelection campaign.

Several hundred demonstrators on June 28 veered onto the private street where the McCloskey's Renaissance palazzo-style mansion sits. The McCloskeys said the protesters knocked down an iron gate and ignored a “No Trespassing” sign. Protest leaders said the gate was open and the demonstration was peaceful.

Gardner said the guns created the risk of bloodshed. A police probable cause statement said protesters feared “being injured due to Patricia McCloskey’s finger being on the trigger, coupled with her excited demeanor."

The McCloskeys contend the protest was anything but peaceful.

“They broke the gate down,” Patricia McCloskey said on “Fox & Friends. “They broke it open, then they broke what was left of it down to the ground, an iron fence, and came in and started screaming threats from the beginning. They had weapons, they had fire material.”

Mark McCloskey said on the Fox News program that Democrat-controlled St. Louis “is a very dangerous place,” and the statistics back him up. The city has long had one of the nation's highest homicide rates, and 2020 is shaping up to be the most violent year in decades.

“This is a prosecutor who has a remarkably low prosecution rate, a remarkably low conviction rate, and I think she’s just trying to make an example out of anybody who’s willing to stand up against the inherent lawlessness and violence in St. Louis,” he said.

Gardner said in a statement that she was disappointed that the case “has been exploited for political purposes, which in turn has opened the floodgates for gleeful racist and misogynistic messages and death threats. The people of St. Louis expect me to pursue equal justice under the law without fear or favor, and that is what I intend to do.”

Gardner, St. Louis’ first Black circuit attorney, was elected in 2016 and appears headed to another term. She easily defeated a white former homicide prosecutor in the August Democratic primary and is heavily favored against her Republican opponent in November.

She's been at odds with high-ranking Republicans before.

In 2018, Gardner charged then-Gov. Eric Greitens, a Republican, with felony invasion of privacy for allegedly taking a compromising photo of a woman during an extramarital affair. The charge was eventually dropped but Greitens, who was also under investigation over ethics concerns, resigned in June 2018. He denied committing any crime.

Gardner’s decision to charge the McCloskeys drew an angry response from several Republicans in addition to Trump.

Gov. Mike Parson has said he’ll pardon the couple if they are convicted. Missouri Attorney General Eric Schmitt asked a judge to toss out the charges.

During a special session earlier this month to address violence in Missouri cities, Parson asked state lawmakers to give Schmitt “concurrent jurisdiction” in St. Louis homicide cases — perceived by many as an effort to take power away from Gardner.

Even in the Republican-led Missouri Legislature, the request prompted backlash and caused lawmakers to delay work on crime legislation Parson sought.