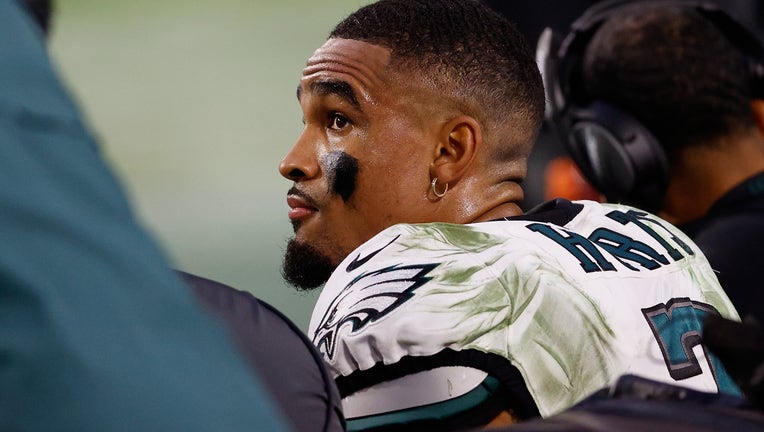 GLENDALE, ARIZONA - DECEMBER 20: Quarterback Jalen Hurts #2 of the Philadelphia Eagles looks up from the bench during the NFL game against the Arizona Cardinals at State Farm Stadium on December 20, 2020 in Glendale, Arizona. The Cardinals defeated t

PHILADELPHIA - The last time Washington faced Philadelphia, the quarterbacks were Dwayne Haskins and Carson Wentz, and the Eagles were the team with playoff expectations.

Week 1 was 3 1/2 months ago, but everything has changed for the longtime division rivals going into the regular-season final. Haskins has been released; Wentz was benched for Jalen Hurts; Philadelphia is eliminated from playoff contention; and Washington stands on the verge of winning the NFC East — if it can beat the Eagles on the road Sunday night.

"We understand the situation," running back J.D. McKissic said. "You can just tell guys are laser focused out there (at practice). There’s not much talking and when there is, it’s about football. Guys are just ready to play."

Who plays at quarterback is still unclear between 36-year-old starter Alex Smith and December practice squad pickup Taylor Heinicke, who was taking online college classes when he got the call. Top receiver Terry McLaurin is also questionable mark with an ankle injury that kept him out of Washington’s first chance to clinch the division, a 20-13 home loss to Carolina last week.

The challenge remains the same, only against an opponent motivated to play spoiler.

"We’ve got to have a no hat rule this week," Eagles coach Doug Pederson said. "We can’t let opponents put division win hats on at the Linc."

Washington coach Ron Rivera has envisioned putting on NFC East champions garb since October when he benched Haskins — whom he has since released — to hand the No. 1 QB job to Kyle Allen. After Allen got hurt, the job fell to Smith, who hadn’t started an NFL game since 2018 when he broke his right leg.

Smith is 4-1 since taking over, and if he can play after missing the past two games with a strained calf in that leg that has a titanium rod in it, it’s a huge advantage for Washington.

"We all depend on each other," Smith said. "Obviously, the quarterback touching the ball every play carries a lot of responsibility. A lot of people depend on you to go out there and make good decisions and be accurate with the football. That’s not something that I take lightly at all. For me, it’s a great responsibility and a great challenge."

Washington at 7-9 would be the third division champion with a losing record since realignment in 2002. The same goes for the 7-9 Dallas Cowboys or 6-10 New York Giants, who play Sunday afternoon, with the winner only capturing the NFC East if the Eagles ruin Washington’s night.

Rookie running back Antonio Gibson was a revelation for Washington with 11 touchdowns until a turf toe derailed his season. He missed two games before returning against Carolina and is questionable again.

"Hopefully we’ll get him rolling and he’ll be good to go Sunday and he’ll give us everything he’s got," Turner said.

Eagles running back Miles Sanders didn’t go through a losing season in high school in Pittsburgh or college at Penn State or his rookie year in the NFL, so this "super disappointed" feeling is a first for him.

"I believe that we’re a great football team," said Sanders, one of nine players the Eagles ruled out with injury. "We just have to play smarter and that’s all around, pre-snap penalties, situational penalties, everything. But I do believe this is a great team and I do believe better days are coming."

Philadelphia won’t make the playoffs for the first time since Pederson’s first season in 2016. The Eagles won the 2017 NFL championship.

Washington linebacker Thomas Davis planned for this to be his final regular-season game and planned to wear cleats that commemorate his 16-year career, including references to Davis’ three ACL tears and recoveries, three Pro Bowl selections and his 2014 Walter Payton Man of the Year award. He won’t play and will need Washington to win to keep his career going.

"I’ve known for a long time, really coming into the season that I wanted this to be my last year," said Davis, who played two seasons after initially considering retirement in 2018. "I’m 110% sure. There ain’t no coming back."

The Eagles have allowed more than 500 total yards in consecutive losses to Arizona and Dallas. Kyler Murray threw for a career-best 406 yards and three TDs against a secondary missing three starters. Andy Dalton had 377 yards and three TDs, even though Darius Slay returned to help the depleted secondary.

Whoever starts for Washington should have an opportunity to air it out against Philadelphia.

"We’ve never really concerned ourselves too much with yards. It’s always been about points and things that affect points, third down and red zone and things like that," defensive coordinator Jim Schwartz said. "We have to figure out a way to figure it out."