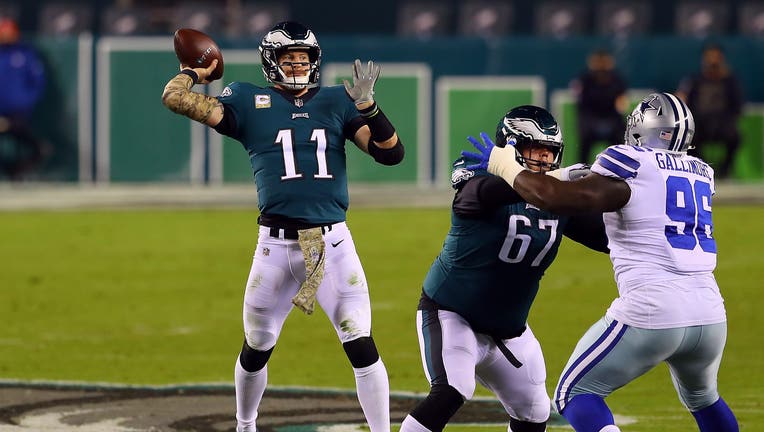 Quarterback Carson Wentz #11 of the Philadelphia Eagles passes to Travis Fulgham #13 in the first quarter of the game against the Dallas Cowboys at Lincoln Financial Field on November 01, 2020 in Philadelphia, Pennsylvania. (Photo by Mitchell Leff/Ge

PHILADELPHIA - Carson Wentz threw a pair of touchdown passes to overcome four turnovers, Rodney McLeod returned a fumble 53 yards for a score and the Philadelphia Eagles beat the Dallas Cowboys 23-9 on Sunday night.

A pair of two-win teams fighting for first place in the weak NFC East in Week 8 put on a sloppy performance fit for the preseason instead of prime time.

The Eagles (3-4-1) took control of the division with their second straight victory. Dallas (2-6) has lost three in a row.

Wentz threw two interceptions and lost two fumbles but his 9-yard TD pass to Travis Fulgham in the third quarter gave Philadelphia the lead for good. Wentz connected with Jalen Reagor on the 2-point conversion to make it 15-9.

Dallas was driving at the Eagles 21 with a chance to take the lead in the fourth quarter when DiNucci was sacked by T.J. Edwards and fumbled. McLeod picked up a loose ball and went the distance for a 21-9 lead. The 2-point conversion failed, but Dallas later took a safety on a punt.

DiNucci started because Andy Dalton is out with a concussion and Dak Prescott broke his right ankle in Week 5.

Greg Zuerlein hit a 59-yard field goal to give Dallas a 9-7 halftime lead. The Cowboys turned two fourth-down stops at their 44 into short-drive field goals.

Philadelphia turned that turnover into a score as Wentz tossed a 2-yard TD pass to Reagor for a 7-3 lead. Reagor, the 21st overall pick, missed the previous five games following thumb surgery. A 32-yard pass to Fulgham set up the score.

The Eagles went for a fourth-and-3 at the Cowboys 44 on their next drive. Leighton Vander Esch sacked Wentz, knocking the ball away and Dallas recovered at Philadelphia's 46. Zuerlein's 49-yarder cut it to 7-6.

Diggs picked Wentz again on a deep pass on Philadelphia's opening drive in the third quarter. But Zuerlein missed a 52-yarder wide right on the ensuing drive.

The Eagles pulled out the Philly Special in the second quarter with wideout Greg Ward, a college quarterback, looking to throw to Wentz, who was covered. Ward ended up running for 2 yards.

The Cowboys had Elliott and Cedrick Wilson take direct snaps in a wildcat formation with DiNucci split wide.