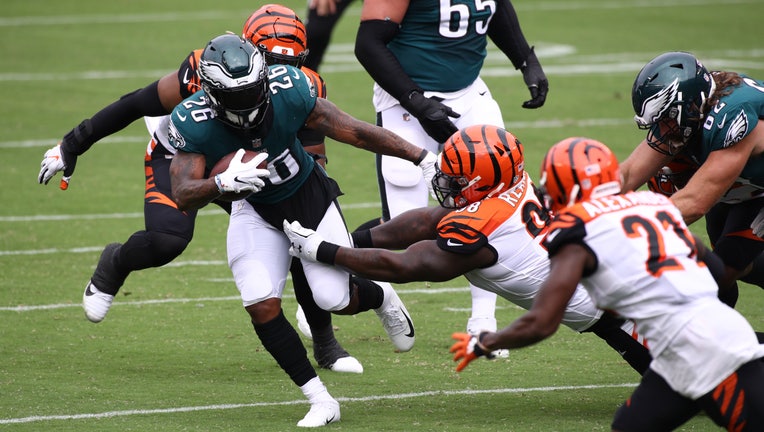 PHILADELPHIA - Joe Burrow kept his team from losing again. So did Carson Wentz after several mistakes.

Neither quarterback earned a win, however.

Burrow tossed a pair of touchdown passes to Tee Higgins in regulation and Wentz dove into the end zone for the tying score in the final minute as the Cincinnati Bengals and Philadelphia Eagles played to a 23-23 tie on Sunday.

Philadelphia’s Jake Elliott lined up for a 59-yard field goal with 19 seconds left in overtime, but a false start on Matt Pryor forced the Eagles to punt it away and play for the tie.

Facing an 0-3 start for the first time since 1999, Wentz drove the Eagles 75 yards in the final three minutes. He barreled 9 yards on third-and-6 to the Bengals 19 and then ran in from 7 with a head-first dive into the end zone. Elliott’s extra point tied it with 21 seconds left.

Neither team could do anything in overtime.

“Tying is no fun. It’s an awkward way to end a game,” Wentz said.

Burrow, the Heisman Trophy winner and No. 1 overall pick, calmly picked apart the secondary in the second half, completing 31 of 44 for 312 yards. He’s still seeking his first win since leading LSU to the national championship in January.

“I’ve never tied in my life, so it feels strange for sure,” Bengals coach Zac Taylor said. ’I know it sure as hell doesn’t feel like we won, that’s what I can tell you for sure.”

Wentz struggled again, tossing two more interceptions, before rallying the Eagles late. He finished 29 of 47 for 225 yards, one TD and ran for 65 yards and one score.

The Bengals took a 17-16 lead on their first drive of the third quarter. Burrow completed all seven of his passes for 78 yards, including a pair of third-down conversions. He finished it off with a 4-yard TD pass to Higgins for a 17-16 lead.

Wentz was picked by LeShaun Sims on the ensuing possession and the Bengals took over at the Eagles 44. They turned that into a 31-yard field goal by Randy Bullock and a 20-16 lead. Bullock hit a 25-yarder to extend the lead to 23-16 with 3:05 left.

Burrow tossed a 1-yard TD pass to Higgins for a 10-6 lead late in the second quarter. But Wentz and the Eagles answered quickly. On third-and-5 from the 26, Wentz hit a wide-open Greg Ward down the right side for a TD and a 13-10 lead.

Jalen Hurts took a snap out of shotgun with Wentz lined up wide at receiver and ran 8 yards for a first down on the opening drive of the third quarter that ended with Elliott kicking a 54-yarder to make it 16-10.

Philadelphia’s opening series ended when Wentz’s pass on third down was deflected at the line and picked by Logan Wilson at the Bengals 44.

Wentz has thrown multiple picks in three consecutive games. He hadn’t done that in two straight games before this season. Wentz hasn’t thrown more than seven interceptions since his rookie year but already has six in three games.

“I gotta be better. I know that,” Wentz said.

“We just can’t have a free run, a (defensive lineman) come clean every single time. That’s something we’ve got to fix right away,” Taylor said.

The Eagles have not forced any turnovers on defense through 13 quarters this season. They recovered a fumble on a punt return last week.

“We have to do better with that,” Graham said.

Bengals receiver John Ross, the ninth pick in the 2017 draft, was a healthy inactive. Ross had two catches in the first two games and is scheduled to be a free agent after the season.

The Bengals host the Jacksonville Jaguars (1-2) and the Eagles visit the San Francisco 49ers (2-1) next Sunday.