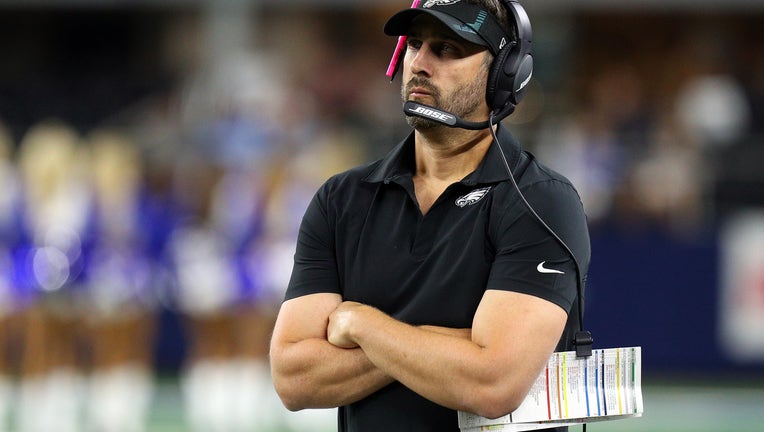 ARLINGTON, TEXAS - SEPTEMBER 27: Head coach Nick Sirianni of the Philadelphia Eagles stands on the sidelines in a game against the Dallas Cowboys a at AT&amp;T Stadium on September 27, 2021 in Arlington, Texas. (Photo by Richard Rodriguez/Getty I

PHILADELPHIA - Nick Sirianni’s experience as an assistant coach with the Chargers helped prepare him to be a head coach.

He’ll try again for his first home win in four tries when the Philadelphia Eagles (3-5) host those Chargers (4-3) on Sunday.

Sirianni spent five seasons with the Chargers in San Diego and Los Angeles first as a quality control coach in 2013 and then quarterbacks coach and wide receivers coach. He followed former Chargers offensive coordinator Frank Reich to Indianapolis in 2018 before replacing Doug Pederson in Philadelphia this year.

"When we were there, Frank, our staff, we kind of developed the system that we had there," Sirianni said. "Then when Frank became the coordinator and I became the quarterback coach, obviously it was really big for my development that we were doing some of the things passing. We were a better passing team there than running team. We found some things fundamentally that we liked, some ways we attacked the defenses together.

"Obviously, that bridged itself into Frank and I reconnecting in Indianapolis, which gave me the opportunity to have some success there to be here. So obviously that was a big development part in my coaching."

Coaching Philip Rivers challenged Sirianni to be his best.

"Being around a player like Philip Rivers, you got to come with your ‘A’ game as a coach every single day because there is not too many things that that guy hasn’t seen," Sirianni said. "When I became the quarterback coach there I had to dig and claw and scratch to give him a nugget that he might not have seen because this guy would see everything.

"So yeah, I just think I really grew as a football coach there and some of the good coaches we had there."

Sirianni may not have become Philadelphia’s coach if Chargers coach Brandon Staley hadn’t turned down an interview with the Eagles to take the job in Los Angeles in January.

Staley was the talk of the NFL after the Chargers started 4-1, but his team has lost consecutive games to New England and Baltimore sandwiched around a bye.

"With me being a first-year head coach, there are things that are happening for the first time," Staley said. "I think that you’re going to say that a lot when you’re in this position because the dynamics of being a head coach, there’s just a lot of them. When you’re responsible for all three phases of the game — offense, defense and special teams — roster management, off the field performance; you’re responsible for a lot. There’s definitely a learning curve. Situationally, managing the game, that component, is something that I’m proving all of the time."

The matchup features a pair of second-year quarterbacks on different paths. Justin Herbert was the sixth overall pick last year, earned AP Offensive Rookie of the Year honors and is entrenched as the franchise quarterback despite consecutive subpar performances.

Meanwhile, the Eagles are still trying to determine whether Jalen Hurts, a second-round pick in 2020, can be the long-term answer. Herbert has completed 63.7% of his passes for 1,994 yards, 16 touchdowns and six interceptions. Hurts has completed 61.3% for 1,819 yards, 10 TDs and four picks. Hurts also has a team-high 432 yards rushing and five TDs.

"A lot of teams seem to have the dual-threat type of quarterbacks," Chargers linebacker Joey Bosa said. "It’s always huge to be able to keep him in the pocket because when they can make plays happen with their feet, that’s kind of when the game opens up for them. It’s going to be a challenge, but we’ve seen that already, so it’s something that we’ve seen before."

Sirianni had taken plenty of criticism for ignoring the run until last week when the Eagles ran for a season-best 236 yards in a 44-6 rout at Detroit. The Chargers are last in the NFL against the run, allowing 159.4 yards per game on the ground. A heavy dose of runs would seem obvious for the Eagles against the Chargers.

Same for Los Angeles. The Eagles are 24th against the run, but the Chargers run the ball on only 34.9% of offensive plays — the fourth-lowest rate in the league. When they do, they’re effective. They’re averaging 4.6 yards per carry, which is tied for seventh.