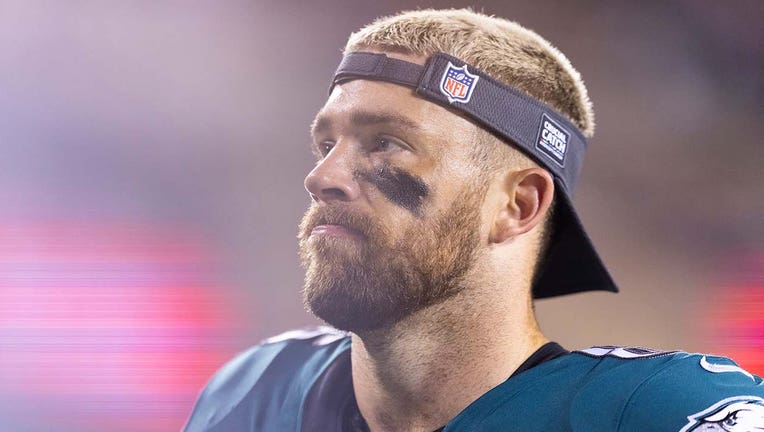 PHILADELPHIA, PA - OCTOBER 14: Zach Ertz #86 of the Philadelphia Eagles looks on against the Tampa Bay Buccaneers at Lincoln Financial Field on October 14, 2021 in Philadelphia, Pennsylvania. (Photo by Mitchell Leff/Getty Images)

PHILADELPHIA - In a full-page ad in the Philadelphia Inquirer, Zach Ertz wrote a long, heartfelt goodbye to Philadelphia Eagles fans.

Longtime Philadelphia Eagles tight end Zach Ertz has been traded to the Arizona Cardinals in exchange for a rookie defensive back and a draft pick, the team announced Friday.

In the ad, Ertz begins by saying how he is "eternally grateful for the love and support I have felt in my eight years in this amazing city".

He then goes onto explain that winning the first Lombardi Trophy in Philadelphia's history was one of his most defining moments and that celebrating with millions of Eagles fans is a memory he won't soon forget.

He was profusely thankful to his family as well as training staff,, equipment staff, and those he interacted with on a daily basis. He also thanked Howie Roseman and Jeff Lurie.

"The city that truly changed my life through interactions with my brothers that led me to my faith. Julie and I will leave here with unbelievable memories that no other city could provide," he wrote.

Ertz added that "Philadelphia is home" in his final sentence of the thankful message.