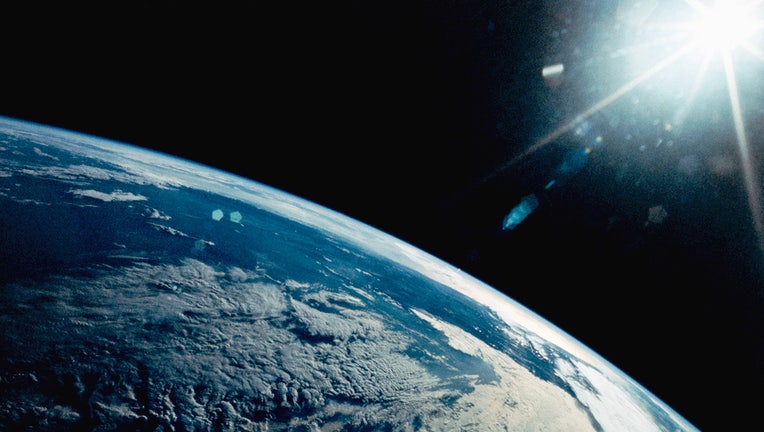 A view of Earth from the Space Shuttle Discovery shows late afternoon sun on the Andes Mountains, with glare and heavy cloud illumination.

BEIJING - A new study finds that Earth’s inner core has temporarily stopped spinning — and now, may actually be reversing directions.

Research scientists in China, Yi Yang and Xiaodong Song, told FOX Television Stations they searched out available repeating earthquakes and seismic activity from all over the globe and over all time periods and used them to monitor the rotation of the inner core.

"An earthquake with magnitude greater than about 5.0 can generate seismic waves penetrating the inner core, like making a CT scan on the inner core structure along the raypath," they explained, adding "For each pair of repeating earthquakes, we compared their results of the ‘CT scan’ (i.e., their seismogram) and infer the inner core rotation from the difference of the two seismograms (waveform shape and arrival times)."

As published Jan. 23 in the journal Nature Geoscience, the researchers found that Earth’s pattern of an inner-core rotation that has varied over the past several decades, pausing around 2009 and slightly reversing rotation since then, and likely follows a seven-decade-period of oscillation.

"We were quite surprised to see the pattern (especially the pause around 2009) from the disappearance of all the changes in repeated seismic waves at the same time (i.e., no more difference between their seismograms since ~2009). Given that the earth is quite complicated, such a clean observation was astonishing," Yang and Song, scientists at Peking University, continued.

Researchers said these observations provide evidence for interactions between the Earth’s layers, from the deepest interior to the surface — potentially due to gravitational coupling and angular momentum from the core and mantle to the surface.

The core’s multi-decade rotational pattern "coincides with several important geophysical observations," researchers wrote, including changes in the magnetic field and the length of the day, meaning the inner workings of the planet could impact the duration of our days.

Still, the impact on our daily lives is "probably small" but may have a "long-term influence over decades or longer," Yang and Song continued, adding that the reversal (or multidecadal oscillation) has impacts on the magnetic field and Earth’s rotation, and thus may impact the surface processes like temperature and sea-level variations.

Going forward, the researchers plan to build quantitative models of the physical mechanisms on the multi-decadal oscillation system and then monitor how the rotation changes in the future.

"We’d expect it to rotate westwards relative to the surface of the earth in the coming years and decades," they said, concluding. "It’s quite exciting going forward. Seismic waves are still the best way and continuous operation of high-quality seismic networks is crucial in monitoring the heart of the earth’ in this regard."