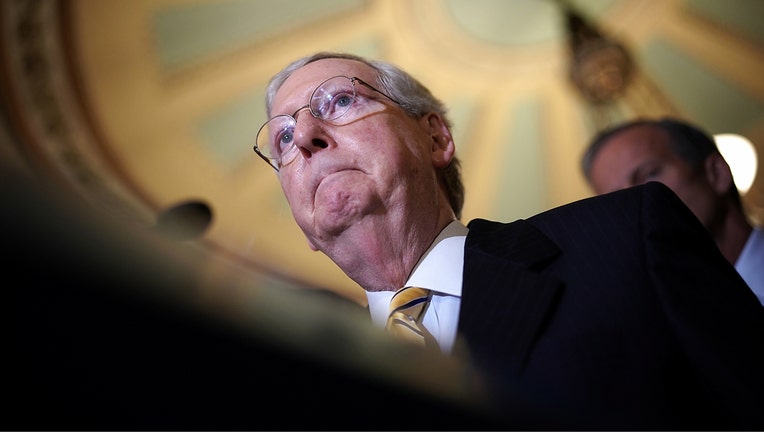 State election officials are anxious and underfunded, some running systems with outdated software and scrounging for replacement parts off e-Bay.

And on Thursday a report from the Senate Intelligence committee concluded all 50 states were targeted in 2016 and ahead of the 2018 election "top election vulnerabilities remained."

But there's no help coming from Congress.

It's a risky calculation heading into 2020, when the stakes will be high for an election that could see record turnout as President Donald Trump runs for a second term. Primary voting is six months away.

Senate Majority Leader Mitch McConnell on Thursday blocked a House-passed bill that would authorize $775 million to beef up state election systems. GOP leaders made the case that the Trump administration has already made great strides in protecting the vote and they say no more funding is needed.

The Senate Democratic leader, Chuck Schumer of New York, called inaction by Congress a "disgrace" and pledged to keep pushing for votes. Mueller's testimony "should be a wake-up call," he said.

"Leader McConnell, let me read you that sentence," Schumer said from the Senate floor, citing Mueller's testimony Wednesday before the House committees about Russian interference. "'They're doing it as we sit here, and they expect to do it in the next campaign.'"

The challenge was underscored Thursday as the Senate Intelligence Committee released the full results of an investigation that found the Russian government directed "extensive activity" against U.S. election systems ahead of the 2016 election. Two years later, ahead of the midterm election, little had changed, as an intelligence assessment reported, "We are aware of a growing volume of malicious activity targeting election infrastructure in 2018."

The report encourages states to "take urgent steps to replace outdated and vulnerable voting systems." It said, "More money may be needed."

The House is pushing other bills targeting fake ads and cyber intrusions and the Senate already unanimously approved one bipartisan measure, which makes interference in elections a violation of immigration law, and another that makes it a federal crime to hack elections systems.

But Democrats - and some Republicans - say Congress must do more.

The most pressing issue is replacing electronic voting machines that do not produce a paper record of each ballot cast that is verified by the voter and can later be audited.

In 2018, 10 states had more than half of their jurisdictions using machines without a paper trail, which cybersecurity experts have warned are vulnerable to hacking and must be replaced.

An AP analysis in July found that many of the 10,000 election jurisdictions nationwide use old and soon-to-be outdated operating systems to create their ballots, program voting machines, tally votes and report counts. Many systems are running Windows 7, which will reach its end of free Microsoft support for software vulnerabilities on January 14, and it's unclear who would pay for extended support.

But time may be running out to address concerns in the states before the next election.

Even if Congress were immediately to send funds to states to replace voting equipment, it would be difficult to make substantial upgrades in time for the 2020 elections. It can take months to decide on replacement machines, develop security protocols, train workers and test the equipment.

Republicans said Thursday that $380 million was allocated to the states in 2018 and not all of that money has been spent.

McConnell objected to the House bill, saying it was "not a serious effort" coming from the same side that he said spent the past two years "hyping" Mueller's investigation into Russian interference in the 2016 election.

"Obviously, it's very important that we maintain the integrity and security of our elections," McConnell said Thursday.

It wasn't the first time McConnell had put the brakes on election security efforts.

The Kentucky Republican halted a bipartisan effort ahead of the 2018 election to beef up state election systems. It stalled again this year.

That measure would have required all states to use paper ballots as a backup to electronic systems if they want to receive federal election money for voting equipment. It would also require that all 50 states conduct audits after elections.

Top Republicans, including Sen. Roy Blunt of Missouri, who tried to push the bill forward, said Thursday much of what it intended to accomplish is now happening under the Department of Homeland Security.

"When you talk to anybody that's responsible for elections, for monitoring outside interventions, and ask them, Do you need any legislation? .... The answer is always no," he said.

Republican Sen. James Lankford of Oklahoma, the lead GOP sponsors of the bill, said while much is being accomplished, the legislation is "still needed, because long-term you want to make sure it's not dropped."

One of those who had concerns about the bill last year was then-White House counsel Don McGahn, who Lankford has said called him in a private capacity as former elections law expert to offer input. Lankford used those suggestions, and others, to rework the bill.

As action in Congress has stalled, federal agencies have moved to address the problem.

But part of the problem is longstanding tensions between the states and the federal government over election systems that are only beginning to smooth.

State officials historically run elections and many, particularly those in the South, are wary about federal intervention. Tensions flared ahead of the 2016 election when federal officials warning of potential interference wanted to declare election systems critical infrastructure. Some states resisted.

Giving nod to those differences, McConnell said any efforts must be done with "extreme care and on a thoroughly bipartisan basis."

The Senate's report said that several weeks prior to the 2018 mid-term election, DHS assessed that "numerous actors are regularly targeting election infrastructure."

Its findings echo those from Mueller's 448-page report, released in April, which found that the Russian government interfered in the 2016 election in "sweeping and systematic fashion."

The Russian influence campaign produced fake Facebook and other social media postings that were viewed by millions of Americans. Hackers gained access to some voter databases in Florida.

The nation's intelligence chiefs say Russia remains intent on disrupting U.S. elections after attempting to breach the election systems of 21 states in 2016. There is no evidence that any votes were changed.