The search for survivors in the rubble of a beachfront condo that partially collapsed in South Florida early Thursday morning was temporarily halted by heavy rain and lightning. At least two people had been confirmed dead Thursday night and officials said nearly 100 were still missing. Officials warned that the death toll was likely to rise.

MIAMI, Fla. - A Florida International University professor said the area where the Surfside condo partially collapsed showed signs of sinking during the 1990s. However, that wouldn’t be the cause for the building to collapse on its own.

Last year, Professor Shimon Wdowinski conducted a study showing the Champlain Towers South building was one of the places on the east side of the barrier island where land subsidence was detected between 1993 to 1999. Wdowinski – described as an expert in space geodesy, natural hazards, and sea-level rise – noted that "land subsidence in and of itself likely would not cause a building’s collapse."

"When we measure subsidence or when we see movement of the buildings, it’s worth checking why it happens," Wdowinski said in a press release. "We cannot say what is the reason for that from the satellite images but we can say there was movement here."

MORE: Inside the search for survivors after devastating partial collapse of South Florida condo

The FIU professor said the western portion of Miami Beach experienced subsidence, but it wasn’t a surprise considering homes were built on a wetland. During the 1990s, Miami Beach saw subsidence at the rate of 1-3 millimeters per year.

Over the period of decade, that could be a few inches of movement, Wdowinski said. 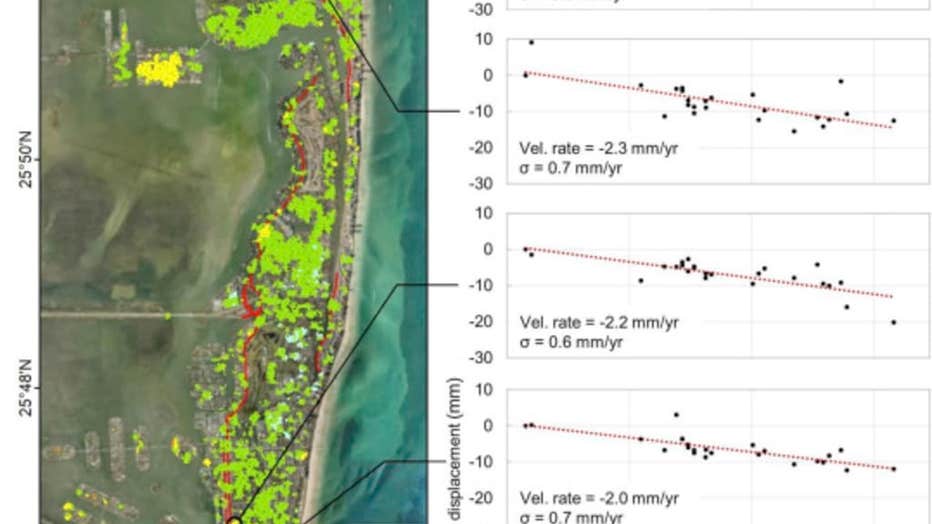 However, that figure is much slower compared to other parts of the world. Wdowinski gave Mexico City as an example which has been subsiding at a rate of 15 inches per year.

His 2020 study can be found here, in the Ocean & Coastal Management journal.