The governor and health experts across the nation say there are some big problems with contact tracing. It's raising serious concerns about our government's ability to fight the virus.

TALLAHASSEE, Fla. - Florida marked another grim COVID-19 milestone Thursday when health officials reported 120 new deaths from the coronavirus -- the highest one-day jump yet amid a surge in new infections that continues to befuddle the state's attempts to contain the outbreak.

The number of deaths was the highest since the 113 reported in early May. The cumulative death toll has now surpassed 4,000 as confirmed cases climbed by nearly 9,000 to more than 229,000.

The state also reported on Thursday the biggest 24-hour jump in hospitalizations, with 409 patients being admitted. 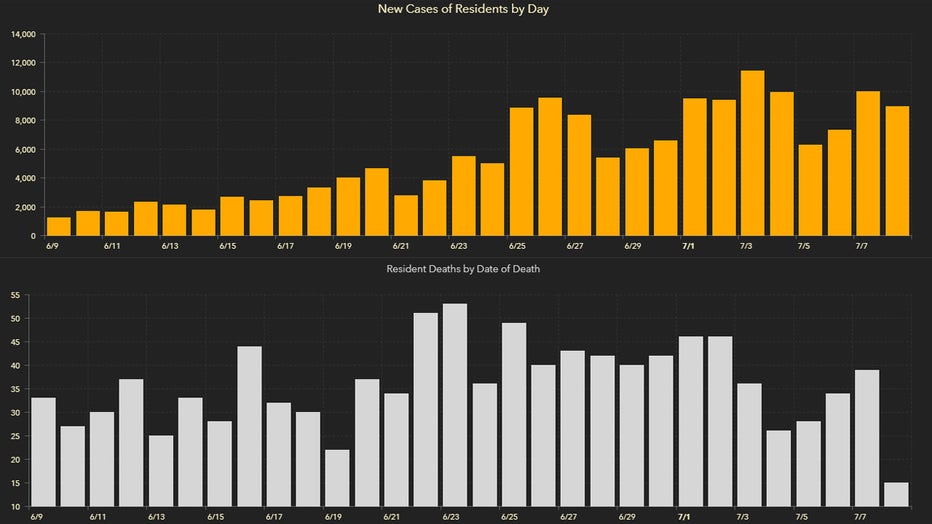 Intensive care units are quickly filling up including in some hospitals with the largest bed capacity such as the University of Florida Health Shands Hospital in Gainesville and Tampa General Hospital.

Data from the Florida Agency for Health Care Administration shows statewide about 14% of the total ICU beds were available Thursday.

Dr. Elizabeth Ransom, chief physician executive at Baptist Health in Jacksonville, said hospitals are on high alert and preparing to bring in temporary staff, anticipating the numbers will rise.

"We worry if we're going to see a bump from the recent Fourth of July weekend," she said.

On Thursday, Florida Gov. Ron DeSantis acknowledged the rising positivity rate in tests, but said "there was no need to be panicked."

"You do have more transmission circulating around the community over the last month, three weeks, than we did at the end of April, all through May, beginning of June," DeSantis said.

RELATED: COVID-19 killed more in Florida, Texas in 1 month than hurricanes did in entire US over 20 years

The governor did not address the record rise in deaths, but said the state dispatched 100 nurses to Tampa after announcing earlier this week that 100 nurses would be sent to Miami to deal with rising COVID-19 hospitalizations.

The uncertainty over the state's ability to contain the outbreak is undermining efforts to steady a fragile economy.

Two of Disney World's four parks are expected to reopen Saturday, but Bank of America earlier this week shuttered dozens of its branches in central and South Florida. In the Florida Keys, a popular community festival that draws 75,000 people was canceled. Fantasy Fest was set to take place in October.

While the number of new jobless claims in Florida again fell -- dipping by 67,070 last week, according to federal data -- there were fresh worries that the ranks of the unemployed could again swell as restaurants and other establishments reclose to stave off new infections.

As he likes to point out, Gov. Ron DeSantis didn’t build the state’s bad unemployment system. Former Governor Scott is the one who gave us the clunker. But while Scott bought it, DeSantis has been driving it for more than a year -- and by his own admission was unaware it was in tatters, even weeks after the pandemic struck.

Hundreds of thousands of jobless Floridians could face deepening financial turmoil as their unemployment benefits run out.

Scott King filed for unemployment near the end of March, waiting two months before he received any money from Florida's besieged unemployment system. He ran his own pet grooming business, but has been out of work, depleted his savings and now may be sick with the virus.

"I have just been applying for anything and everything that's out there," said King, who came down with flu-like symptoms last week and is now waiting for COVID-19 test results. "It's very discouraging."

Since mid-March, more than 2.3 million Floridians have sought unemployment benefits from the the state's Department of Economic Opportunity. The department said it has paid out about $9 billion in benefits on nearly 1.7 million processed claims, according to the state's unemployment dashboard.

After moving to reopen the state's economy, DeSantis has refrained from requiring Floridians to use face masks statewide and left it to localities to decide if closures and other stricter measures are warranted.

The majority of Florida's roughly 229,000 cases of COVID-19 have been concentrated in Florida's most populous regions, with South Florida remaining the hot spot.

Doctor explains the facts about masks

What types of masks work, how do you wear them, and who should not wear masks?

The surge in hospitalizations in certain areas has spawned pleas for Floridians to wear masks and maintain social distancing and prompted local officials to retrench.

Bradley Kilgore, the chef and owner of the Kilgore Culinary Group, said he has had to close five of his restaurants and laid off more than 100 employees.

In a news conference Thursday, Kilgore joined others from the restaurant industry to push for a $120 billion federal bailout package to offset losses. The National Restaurant Association said more than 8 million workers have become unemployed because of the virus.

"It will be extremely difficult, as it already is, to look these people in their eyes," he said, "and let them know that they don't have a job anymore and we don't have any answers."